The impact of Brexit on European versus US derivatives trading.

Could the aftershock of Brexit land a win for the US? Fred Maple reports.

Many of the attention-grabbing headlines regarding Brexit have been focused on how relations between the UK and the remainder of the EU nation states will ultimately shake out, with the common wisdom that winners or losers in the over-the-counter (OTC) derivatives markets will be limited to financial hubs inside the two main protagonists.

But a third option is that the US takes some derivatives trading once the UK officially embraces Brexit on March 29, 2019.

For example, Daniel Maguire, the CEO of central counterparty (CCP) LCH.Clearnet, told the House of Lords inquiry into ‘Financial regulation and supervision following Brexit’ on 25 October 2017 that, as part of its contingency planning, it had to contemplate the movement of its business, “and New York is clearly a potential destination. As LCH is directly registered in every jurisdiction in which it operates, it would have no need to up sticks.”

LCH is not alone in contemplating the US as a likely home for the derivatives business. Others feel the US’s own regulatory regime – which has spent painstaking hours negotiating equivalence with the EU already – could emerge as winner as a result.

“From a US perspective, there is some level of equivalence on CCPs and trading venues with the EU. In theory, the UK wouldn’t have the same equivalence if it were a third country after leaving the EU without securing a deal. Therefore, we could face a scenario where a US CCP may have equivalent access to Europe but a UK-regulated CCP may not,” says Dan Marcus, global head of strategy and business development at Tradition.

“Given there is already equivalence between the US with the EU, there is a view amongst some market participants that it would be more suitable to move business from London to New York, rather than the EU post-Brexit due to the cost of capital being lower. In that sense, markets would still likely be a loser, but the US could competitively be a winner.”

The Commodity Futures Trading Commission (CFTC) and the EU have been busy getting the implementations of their respective regulations – the 2010 Dodd-Frank Act and the latest iteration of the Markets in Financial Instruments Directive (MiFID II) – in line in order to make sure that derivatives markets can operate in equivalence and iron out regulatory arbitrage.

The CFTC rubber-stamped a substituted compliance framework for dually-registered CCPs located in the EU on March 16, 2016. The regulator followed that up by approving an exemption from the agency’s swap execution facility (SEF) requirements for multilateral trading facilities (MTFs) and organised trading facilities (OTFs) – a feature of MiFID II – on December 8, 2017.

However, it has not all been plain sailing. This year, commissioners at the CFTC became concerned after the European Commission (EC) published a proposal that would bring CCPs that clear a significant amount of euro-denominated swaps under the auspices of the European Central Bank (ECB) and European Securities and Markets Authority (ESMA). It was widely seen as a land-grab for market share in the wake of Brexit.

Now the CFTC is also looking at re-working its own rules for SEFs under the umbrella process of ‘Reg Reform 2.0’ – a project of current chairman Christopher Giancarlo.

“Europe and the US have struggled to get equivalence because they don’t operate on the same legal basis,” says Scott Fitzpatrick, chief executive at Tradition SEF. “Dodd-Frank and MiFID II are slightly different, but they have cobbled around that and it kind of works. Then you have another issue around the new SEF rules – if you have a divergence away from the level of equivalence from what you have now for venues, then will it still be equivalent? The EU might well say the equivalence we had was for the original version of the SEF rules, not for the second.”

“We need to rely on cross-border co-operation between the regulators to ensure any changes enhance, not detract from, current operating models of equivalence,” he adds.

Ironically, the tweaks to the SEF rules – expected to be published at some point this year – could bring the US closer to the EU and help bridge the gap. Liquidity still remains split between the EU and US since the Dodd-Frank regulatory regime began to take effect, but the CFTC is likely to make the new rules less onerous on market participants in how precisely they trade derivatives, which is similar to how MiFID II operates.

For Tradition, one of the main concerns is how their operations and the liquidity they need might fragment as a result of Brexit – be it to New York, somewhere else in Europe, or even numerous locations globally.

“If your customers – in terms of geographical location – are fragmented, does that mean the modern world of financial services is fragmented all over Europe, rather than having the concentrated relationships we had previously? That’s a possibility, but the cost of capital – based on the concentration of financial market activity – is very much lower in London. Accordingly, should political sense around Brexit align with economic sense, then liquidity will remain overwhelmingly concentrated in London in most asset classes. Only time will tell,” says Tradition’s Marcus.

“Tradition operates a global group with multiple offices in locations around the world. This scale provides commercial flexibility. If there is demand by our customers to move business to non-EU locations we will carefully consider this if it makes business sense,” he continues.

James Wood-Collins, chief executive at buy-side firm Record Currency Management, is reliant on a liquid currency market for his customers in the wake of Brexit. However, he is not particularly concerned with how the FX derivatives market will continue to function post-Brexit, even if the worst case ‘no-deal’ scenario were to unfold.

According to the latest semi-annual FX turnover survey published by the Bank of England on July 24, the UK figures hit a new record high of US$2.727 trillion per day on average, up 15%; London has always been the major hub for FX and there are no signs that will dwindle post-Brexit, says Wood-Collins.

“We have debated whether our ability to place an order or seek a price with an EU bank would be impacted in a hard Brexit scenario, and whether we might be challenged in trading with non-UK banks. For us, that’s theoretical but a remote possibility. All of the trading desks we deal with are based in the UK as that is where the liquidity is, so as a UK firm we don’t see an obstacle there,” he says.

“The UK government and Treasury have indicated that, regardless of what the EU does, they will create a special permissions regime to allow EU businesses to come into the UK. So it would seem that even if a London-based trading desk of an EU bank is somehow seen as being an EU entity, then there will be this regime for them to continue serving clients in UK,” he continues.

For those firms based in the US, some think it is too early to tell whether there will be any specific changes to how they operate as a result of Brexit or who potential winners and losers will be.

For example, Russell Investments, a Seattle-based asset manager that invests across a broad range of asset classes including FX, rates and credit has recently created a team to look internally at the different scenarios that could play out as a result of Brexit. This could affect how the firm trades and with whom, but also how it interacts with clients in the future.

“We need to look at how it makes a difference based on the domicile of funds and clients for whom we trade as well as where our trading counterparties are executing the business,” says Lisa Cavallari, director of derivatives trading at Russell Investments. “It’s not just trading, but also vendor relationships. Where they reside and where they do business will have downstream effects. It’s still overwhelming just narrowing the scope.”

Cavallari likens exploring the possibilities around Brexit to ‘opening Pandora’s box’. Ultimately, she thinks winners and losers are difficult to discern and will not make any rash decisions until conversations pick up later this year on how best to manage the business when dealing with their own bank counterparties.

“We expect momentum to pick up after the Labor Day holiday with discussions that pave the way to make things easier to understand how this will all take shape. We certainly don’t want to create an artificial construct where some client or counterparty is infringed as a result of Brexit and we’re suddenly hit by some rules based upon the way a client, fund or trading counterparty is organised.” 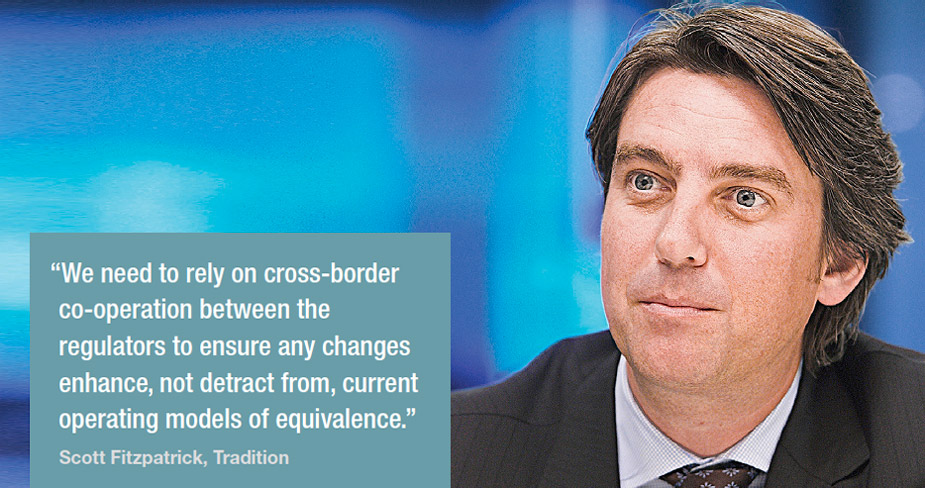 Whoever wins as a result of Brexit, the problem for the market is that there are likely to be a lot of losers, says Tradition’s Fitzpatrick.

“If things become too costly and complex at an international operating level, then what happens is repatriation of activity. Inevitably, and we saw this with the introduction of Dodd-Frank, firms repatriate trading and business functions to where it makes most sense for them economically, be it the US or Europe – or even the UK. It’s not about winners and losers, it’s about what’s the best solution at a firm level based on the service(s) they need or want to provide,” he says.