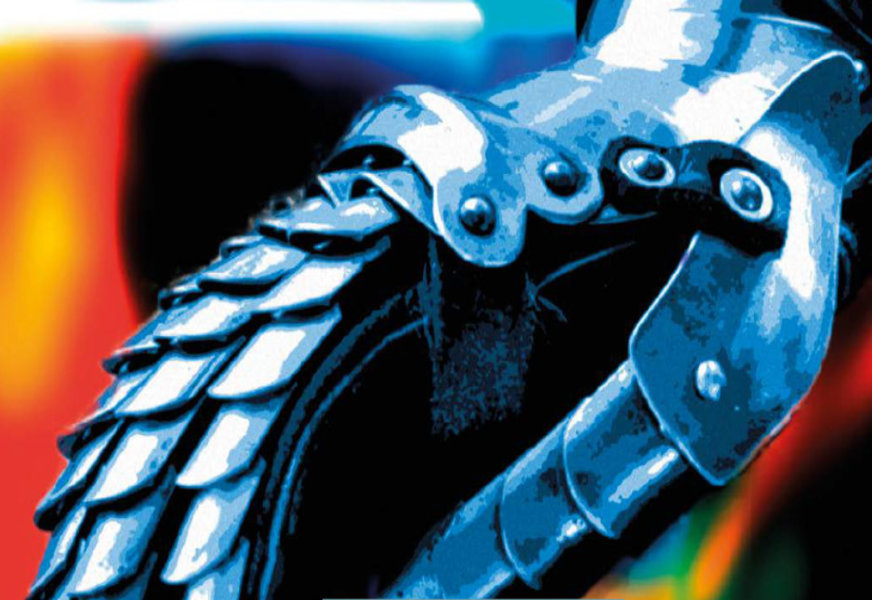 Bloomberg’s new pricing model for bond trading – if accepted as delivering value – will pay for development of new functionality.

Competition between the big three electronic bond market operators; Bloomberg, MarketAxess and Tradeweb; and their smaller rivals is set to heat up in 2021.
In Q4 2020, in a story exclusively broken by The DESK, Bloomberg threw down the gauntlet to rivals for the year ahead, when it announced it was completely revising its fee structure for bond trading (see News), generating revenue to develop more competitive offerings.

“There has been a growth in efficiency and offerings from some of the other platforms, particularly all-to-all trading which has hugely picked up,” says one head of fixed income trading at a major UK asset manager. “Bloomberg, and they say it themselves, have slightly lacked.”

As bond trading is still evolving, there is still space for either incumbent electronic firms or new rivals to establish a stronger foothold.

Paul Cable, head of international bond trading at T Rowe Price says, “Is there room for a competitive shake up? Absolutely. I don’t think consolidation will play out further, I expect to see the big three and then one or two other on the side lines, but there is room for movement. For example, more auction-type electronic trading, if that can get off the ground.”

Pressure had already cranked up in 2020 as venues sought to provide better access to liquidity for traders facing very volatile markets. Firms increased their adoption of electronic trading and new e-trading protocols, driven at first by the market sell-off in March. For example, Bloomberg’s rival Tradeweb reported its highest ever volume of US$1.0 trillion in March 2020, with November and October also breaking the US$900 billion barrier as its second and third highest ever months for traded volume.

Bloomberg’s plan of attack
“We are further incorporating the breadth of our data and pricing into the trading workflow,” says Derek Kleinbauer, global head of Fixed Income & Equity e-Trading at Bloomberg. “Portfolio trading is a big opportunity; automation [of trading] continues to be a prevalent theme and something that we have been supporting across fixed income for the last few years. In addition, we are enhancing existing tools clients use today, such as IB trading, and offer workflow where clients can be on Bloomberg and facilitate price discovery, execution and straight through processing.” 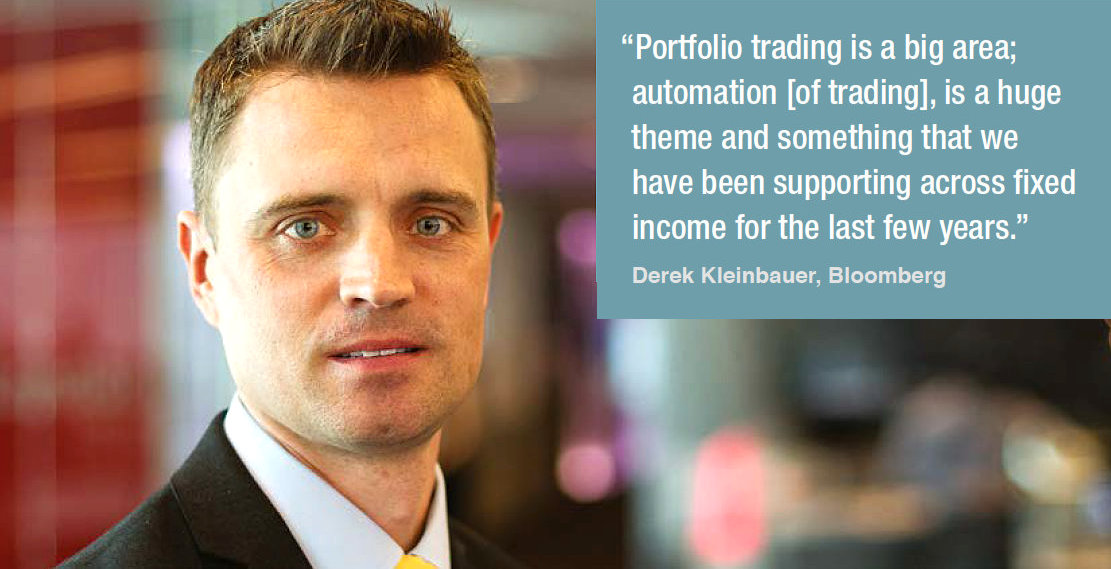 The trick it needs to manage is offering value vie these new services at the right cost point to suit the banks who are charged the new trading fees.

“The challenge for Bloomberg is that they already have the terminal fee, and with the terminal fee that everyone pays, people have had the trading part as an inclusive cost,” says the head of trading at the UK asset manager. “If that cost is then going to increase, albeit in a small way, it’s still a cost for the bank. So, I think you may see some push from the banks towards direct trading potentially.”

How is Bloomberg changing?
According to The DESK’s research, Bloomberg currently supplies the most widely used dealer-to-client (D2C) electronic trading protocol for the buy-side through messaging and chat. The DESK’s Trading Intentions Survey 2020 found that 75% of buy-side traders using Bloomberg messaging tools – the most popular – and 58% used Bloomberg’s execution / order management systems (E/OMS) as trading interfaces for the corporate bond markets.
Why would Bloomberg rock the boat? As bond trading is evolving, other platforms are seeing significant volume flow through new trading protocols.

“Bloomberg tends to get used for slightly bigger tickets that you can only ask three people, or maybe ask one, because there is more information that you can see from axes and so on,” say one senior trader. “The list functionality at Bloomberg isn’t as good as its peers, and it doesn’t have all-to all trading. So they need to improve that, pretty quickly, because the guys that offer all-to-all will claim it gives you a 10 to 30 per cent better chance of trading with someone.”

Gareth Coltman, global head of trading automation at MarketAxess says, “We are very focussed on trying to provide the broadest possible liquidity set we can, in terms of traditional liquidity providers and all-to-all through our Open Trading protocol. That is approaching 30 per cent of all of the liquidity on the platform. It isn’t available anywhere else, and it’s totally unique.”

Bloomberg needs to ensure its ubiquity is matched by innovation. Consequently it is developing new ways of trading on its platforms to counter this competition, to overcome limits on the way it is used today, partly by joining up the components it offer as separate services.

Paul Kaplan, global head of Credit, Equities, TRS, and Price Transparency at Bloomberg says, “We have just released a production version of ‘RFQ to Many’ for portfolio trading, which includes both sell side and buy side support.”

This is expected to be released to beta soon, and then production in early 2021. The portfolio trading basket builder tool will try to optimise those workflows and include analytic tools.

“When someone wants to trade on a basket, we can help them upfront to optimise what that basket should look like by providing liquidity scores and other analytics,” Kaplan explains. “Then when they are ready to trade they can use our tools to trade electronically.”
The firm’s BVAL pricing tool, which is currently used by firms to mark their books end of day and as a price source intra-day, is incorporated into portfolio trading tools for RFQ, as a reference.

The model will work via Bloomberg’s messaging system to minimise disruption in current workflows.

“They will soon be able to use our portfolio trading tool to communicate via message back and forth, sending baskets internally between portfolio managers and traders, and once that is optimised internally they can send that externally to dealers to get feedback on that basket. We will use analytics and communication tools such as message and IB to help.”
Another new development is IB ticketing, functionality which allows people who are messaging in IB, to right-click and highlight text to have a ticket open.

“Once a user is in the ticket environment we will look at the data they have highlighted and start to put that ticket together for them when they are ready to trade,” says Kaplan. “The user will have all the details, and can make changes if they need to. If the user doesn’t highlight text they can still right click and their ticket will be right next to their IBs. As clients are negotiating and potentially trading a voice workflow, they have a very easy way to process that trade via process negotiated trade (PNT) in a ticket immediately.”

The battleground
As banks can trade directly with their clients, platforms need to continue to provide real value to both sides in order to justify their intermediation of that relationship.
“It takes a certain discipline and culture to keep taking risks around innovation,” says Coltman. “Historically we rolled out services which at the time seemed perhaps disruptive, but we felt we were servicing a clear need particularly on the buy-side client base.”
He observes that a “two-tier market” is evolving from a trade execution perspective. One tier includes bonds that are included within indices, then traded by the exchange-traded funds which track the indices creating more turnover and therefore more liquidity.
“In those particular bonds, there is lots of liquidity so the question for traders is, how can I execute most efficiently?” he says. “The other tier includes a long tail of credit and off-the-run rates products, where the challenge is actually finding liquidity. In that area a trader has got to find a way to translate the investment idea into execution, and that’s not always as easy as it sounds.”

Some trading protocols will better support highly liquid trades, typically low touch, whilst others will need to support trading in which liquidity and price are harder to find.
Laurent Albert, deputy CEO and global head of execution for Natixis TradEx Solutions, says, “We see four viable lines of liquidity today: via banks that have historically provided liquidity in a bond; portfolio/program trading (PT) for a large number of securities in marginal size; via request for quote; and via liquidity providers such as ETF market makers. PT is increasing but it is at the beginning. I think that dealers are ready to provide portfolio/program trading through Bloomberg, Marketaxess or Tradeweb.”

The battleground on which platforms will fight stands not only on execution, but also on data he says.

“If you look at the firms that link data and execution, MarketAxess is a key player via its integration of Trax data,” Albert observes. “That allows it to provide composite price and interesting metrics. Through Open Trading it allows anonymous trading making it akin to a technological broker, and we don’t need to authorise a huge number of banks to get access to them we face off against MarketAxess.”

He also notes that Liquidnet, the block trading specialist, is an interesting partner.
“We know that it handles less than 1% of our global bonds execution activity today but [after the planned merger] with TP ICAP it will be stronger and bigger. It provides a bucket of liquidity in fixed income, which we have integrated. Trading through its new venue allowed us to capture new liquidity.”

As these platform operators, along with Tradeweb and Bloomberg, battle it out to attract buy-side traders there are other considerations which may determine who the final victors are.

“Banks are not a fan of the platform that is the most expensive,” notes one senior trader. “So if the fees are cheaper on Bloomberg than on MarketAxess they would still rather trade on Bloomberg. Unless you go direct [to banks]; that’s probably where we are in five years’ time.”

T. Rowe Price’s Cable also noted that traders’ heads will only be turned so far by new trading tools, as the price formation challenge is fundamentally one of data.

“I would rather anybody spent money on improving transparency or creating more uniform data that we can all make use of, over a twist on an RFQ or more portfolio trading,” he says. “While those are well and good, they can only be taken so far.” 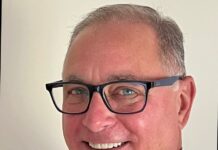 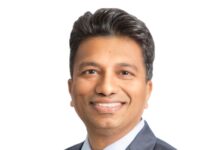