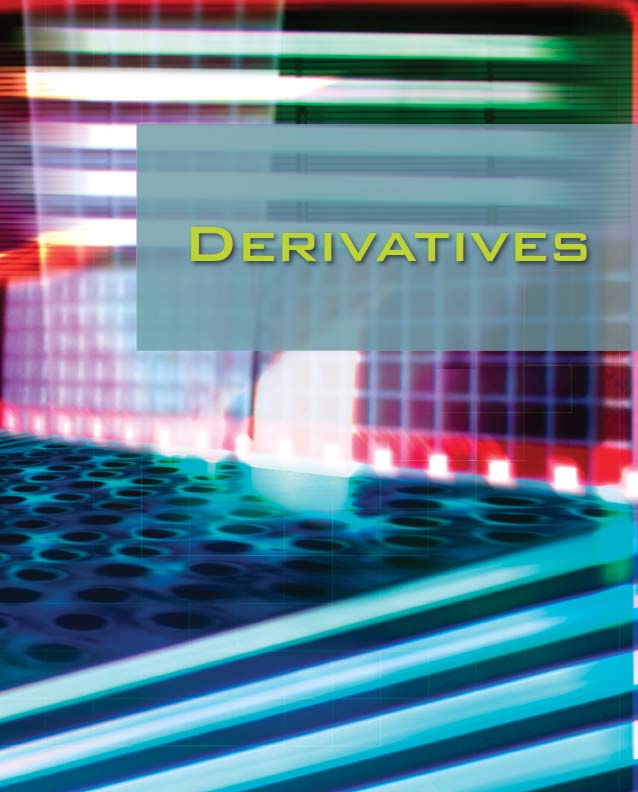 Clearing of European derivatives now looks set to stay in London for the foreseeable future, but traders still need to assess how the clearing house they use can impact portfolio optimisation of their derivatives. Fred Maple reports.

The political tug-of-war between the United Kingdom and the European Union on where is best to centrally clear euro-denominated derivatives has resulted in a rather large sideshow for firms that are trying to seek value for money – no matter which central counterparty (CCP) they use.

It might seem a simple choice. After all, LCH, Eurex and CME Group all clear products such as interest rate swaps, while ICE also clears credit defaults swaps (CDS), meaning there is enough competition in theory. However, there are a number of factors which go into deciding where a bank or buy-side firm should clear its trades.

“The total cost of trading comprises a number of components,” says Christian Lee, a consultant at Catalyst. “There are not just clearing costs, but include capital and funding costs, and these are all part of the equation that feed into the ultimate trading cost in any portfolio.”

Since clearing comes with certain unavoidable costs, such as margin and clearing broker fees for the buy side, and other CCP costs and capital charges for facilitating clearing for the clearing brokers, participants are keen to optimise the entire process. Much of this may depend on a firm’s ability to be flexible about where they clear. 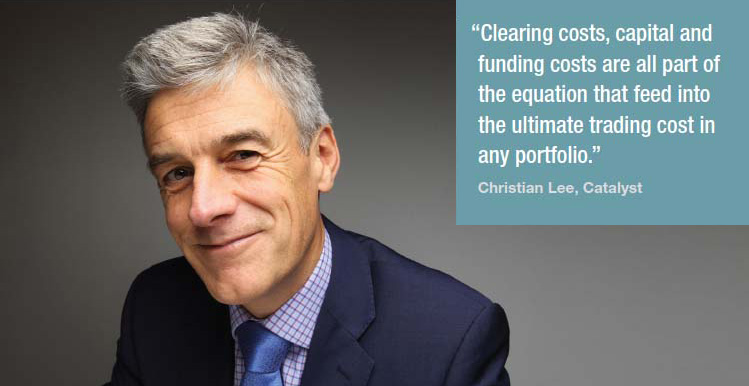 “There are degrees of sophistication to which banks are able to measure and make their decisions – more sophisticated players will have tools available to see pre-execution what the marginal costs will be. Those incremental costs will be dependent on the profile of trades that they already have been cleared, and will also be balanced against the profile of non-cleared trades,” says Lee.

For CCPs there have been winners and losers as volume has amassed for certain derivatives in one clearing house or another. For example, in interest rate swaps cleared in the US, LCH has a roughly 95% market share in dealer-to-dealer trades, while that figure is also above 90% for client-cleared trades, which represent those trades executed by a buy-side firm via a clearing broker.

At the outset of mandatory clearing in the US, the playing field was more level between LCH and CME Group. But a significant basis began to emerge between the two in 2015, making it more expensive to trade the same swap at CME compared to LCH. This is predominantly as a result of capital rules put in place under Basel III, which has made it more expensive to clear at multiple CCPs. 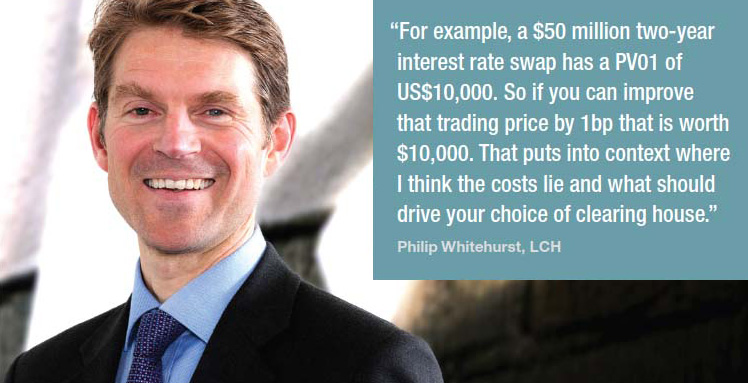 Philip Whitehurst, head of service development for rates & FX derivatives at LCH, says, “If a dealer is able to make prices to a global client community from within a single CCP, and hedge in the interbank market clearing at the same CCP, then obviously it is able to flatten itself in terms of risk and therefore margin, and also to maximise their compression efficiency. So the cost of that trade is very little, to the dealer and also to the system.”

Compression services can help in this regard, too. Basel’s leverage ratio rule hits gross exposure so CCPs have tried to help reduce what is sitting on a dealer’s balance sheet, even if the risk profile is the same.

The cost of clearing

For Whitehurst, trade execution costs are the biggest pain point for the clearing community. Take direct clearing fees. For a high-turnover client, the swap registered at the CCP has a US$25 fee, followed by a 10 basis points (bps) (0.1%) hit for initial margin (IM). But that can pale in comparison to the bid/offer spread charge.

“For example, a $50 million two-year interest rate swap has a PV01 of US$10,000. So if you can improve that trading price by 1bp that is worth $10,000. That puts into context where I think the costs lie and what should drive your choice of clearing house. Even a better execution price by only 1/10th of a basis point would save you $1,000, relative to a ticket fee of $25,” says Whitehurst.

Execution costs might be one side of the equation and easy to minimise, but margin costs can also add up for buy-side firms. On a one off, £10 million, five-year swap the cost would be roughly 5% of the notional as an initial margin, equating to £500,000 – a potentially huge burden for smaller firms.

“In isolation that can be expensive, but where you get benefit is by scale. By adding directional risk it will make it more expensive, but a flat delta will leave initial margin relatively low because of the portfolio effects, and CCPs will manage a default scenario on a portfolio basis, so this makes it more efficient from an initial margin perspective to have more trades cleared,” says Catalyst’s Lee.

While margin can be expensive, most clearing brokers provide tools to enable buy-side firms to see what the impact of executing a certain trade at a clearing house will look like.

“When deciding where to clear a trade the first thing the trader will do is look to see what margin offsets might be available at the CCP, essentially they will be looking to see what the impact of any new trade is on their existing pool of risk,” says Ricky Maloney, a consultant at Solvere FMC. “Clearing brokers provide pre trade margin calculators to their clients which are used to model the margin impact of a new trade. Where the greatest risk offset occurs one should see the least required margin.”

The answer can become more complicated when considering most buy-side firms will have more than one clearing broker, and increasing the amount of trading with one broker or another in certain products could result in higher margin requirements in the long run, particularly if the exposure does not offset.

The best place to clear

So where does a trade clear in on order to achieve maximum efficiency?

“It’s an easy question but the answer has so many variables,” says Maloney. “A firm with two clearing brokers at a single CCP really only has to worry about which clearing broker account the new trade is given to, where there is an opportunity to reduce risk and consequently the margin, capital and funding profile of a portfolio it should absolutely be taken. On the very rare occasion where a new trade offers no advantage in that sense, then I guess it comes down to where the portfolio might be better suited going forward.”

Some CCPs, like Eurex, have come up with new ways to help reduce the inevitable costs that central clearing brings. In Europe, where Eurex has a huge amount of liquidity in Bund, Bobl and Schatz futures, the CCP offers cross-margining capabilities between those contracts and OTC derivatives such as euro swaps. 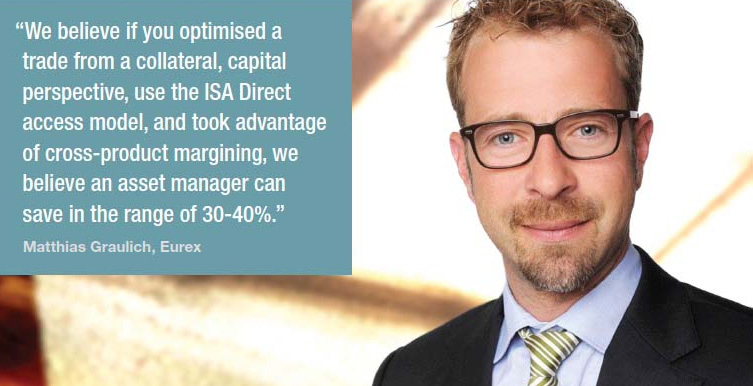 “While other CCPs have similar functionalities, our uniqueness is that we have a significant franchise on euro listed business, and if you add euro OTC business to that, then you would be able to realise netting efficiencies – this is particularly useful for hedge funds, who run a lot of asset-swap business,” says Matthias Graulich, chief client officer at Eurex.

For example, Graulich claims that a buy-side firm doing an asset swap – where the OTC swap and future have the same notional and are transacted in opposite directions – then a margin saving of 17% can be achieved. The problem for Eurex is that it has been hard to attract swap liquidity in OTC derivatives, making margin savings like that hard to achieve. Currently, Eurex has a notional outstanding in euro swaps of just over E1.5 trillion, compared to LCH’s E40.5 trillion.

“Hedge funds have a high turnover of trades, but they are still hesitant because if they get into a trade today, because liquidity is not strong, they might incur some liquidity costs if they try to get out of the trade at a later point in time,” says Graulich.

To help cure that liquidity issue, Eurex has launched a partnership program to get banks clearing their euro swap trades at the CCP, with the idea that the buy side will eventually see better and more competitive prices quoted at Eurex and help them realise those margin savings.

Another initiative is the firm’s ISA Direct program, which is designed to ease the burden of the capital rules on the dealer community. Rather than being a credit intermediator, the clearing broker becomes a service facilitator, because the buy-side client directly faces off with the CCP, in theory making it more capital efficient. This would allow clearing brokers to charge for services but not the capital function.

“We believe if you optimised a trade from a collateral capital perspective, use the ISA Direct access model, and took advantage of cross-product margining, we believe an asset manager can save in the range of 30-40%. Even if they were to see a larger bid/offer spread on Eurex compared to LCH, even that would be way over compensated by these other benefits,” says Graulich, who confirmed that three firms have signed up to the scheme. 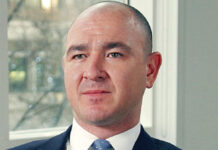