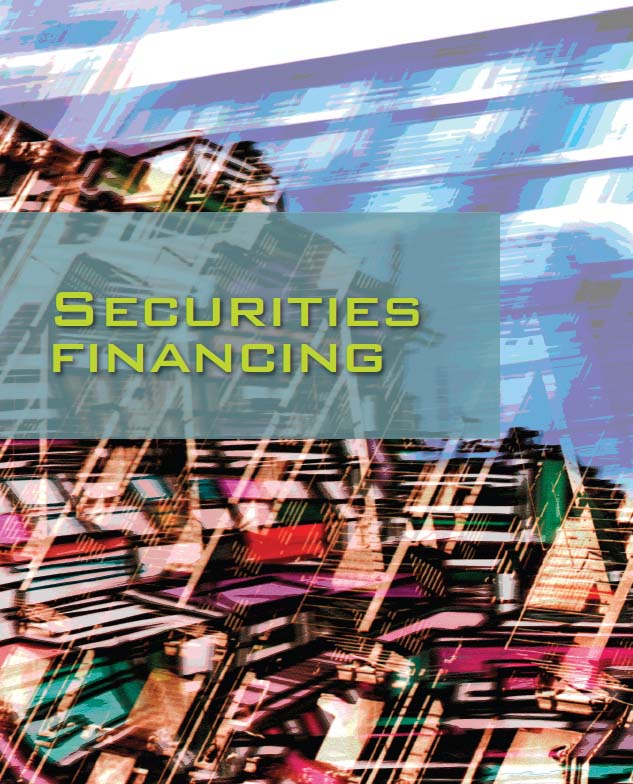 As 2017 draws to an end, memories of the price dislocation that hit repo markets in December 2016 bring tears to the eyes of many traders. A repeat of the unprecedented disruption is not expected, but if fissures occur, then European buy-side players are still reliant upon on their sell-side counterparts to tap into liquidity. 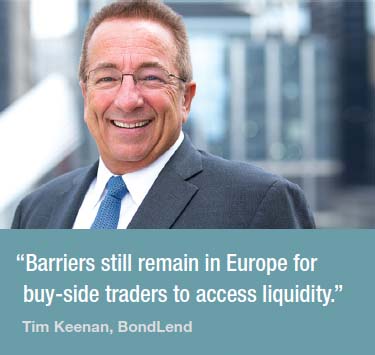 “Barriers still remain in Europe for buy-side traders to access liquidity, particularly with regulations such as the liquidity coverage ratio and Basel III leverage ratios having shrunk bank balance sheets,” says Tim Keenan, global product owner, for securities finance technology platform BondLend. “In the US, a great deal of progress has been made in giving the buy side access to liquidity in the centrally cleared repo markets. If Europe makes similar changes, it could help alleviate this issue.”

In June, the Depository Trust & Clearing Corp (DTCC) received the green light from US market regulator the Securities and Exchange Commission (SEC) to launch its centrally cleared institutional tri-party (CCIT) service for institutional investors, hedge funds and insurance companies. The aim is not only to enhance transparency and stability but also minimise the risk of destabilising runs and fire sales in a stressed scenario.

However, not all primary lenders are included. Asset managers from the US$2.6 trillion money-fund industry are not on the roster due to restrictions as registered 40 Act funds under the SEC Investment Company Act of 1940.

In Europe, the landscape is much more fragmented and tri-party repo is not as prevalent. However, central counterparties (CCPs) are launching their own versions with the LCH recently opening its repo clearing platform to buy-side firms through a new sponsored access model. This enables them entry to the clearinghouse directly, with clearing agents providing financial guarantees and services for their buy-side clients. The model has emerged as a preferred solution because it is seen to alleviate credit risk that could be created in the clearinghouse through the inclusion of non-bank members.

There are also those organisations looking at peer-to-peer platforms such as Bank of New York Mellon’s DBV-X and Elixium, which is backed by Swiss interdealer broker Tradition, and aims to facilitate liquidity by connecting deep pools of cash investors with collateral providers.

“In the past three to six months, we have signed a number of new institutions that are interested in all-to-all or peer-to-peer lending on the platform and we expect onboarding of clients to continue,” says Roberto Verrillo, head of strategy and markets at Elixium. “I think there will be an inexorable shift because regulation is pushing for greater transparency, best price execution and equilibrium of access to markets.” 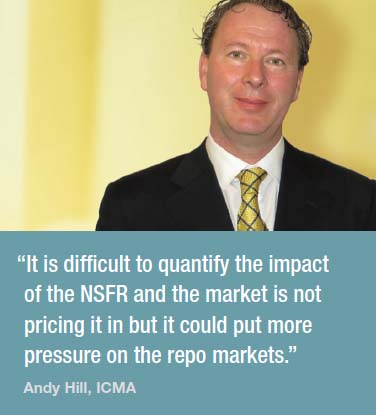 Andy Hill, a senior director at the International Capital Market Association (ICMA) adds, “There is definitely more focus on year-end, and the asymmetrical risks and awareness of the innovations in the market. However, the buy side still relies heavily on the bank relationship and balance sheet for their financing needs and although that will change, it will not change rapidly.”

While the US deals are mostly overnight, the maturity distribution of the European market is longer and has been lengthening. Longer tenors are typically considered higher risk and can be more impacted by creditworthiness and interest rate fluctuations. Hesitation over the use of platforms mainly revolve around the documentation required to trade with multiple counterparties and counterparty risk.

Also, as one industry participant put it, “sell-side firms can provide in-depth credit risk. They can also have a role in dealing with the tenors of the different transactions.”

Although there will certainly be other platforms and CCPs competing for buy-side attention, sell-side firms have become better at balance sheet efficiency.

“Market participants have learned from the 2016 year-end events and are more aware of the potential downside of not locking-in their financing needs well in advance of the 2017 ‘turn’” says Hill. “Buy-side firms, for instance, even where they do not know their specific financing needs, will already have negotiated balance sheet capacity from their broker-dealers”

“In turn, this has led to more balance sheet being available for repo intermediaries, which should also help over year-end,” he adds

ICMA’s latest semi-annual survey, which canvassed 60 firms, showed that the total value of the repo contracts outstanding in June 2017 stood at E6.455 billion, up from E5,656 billion in December 2016.

End of year can be a nerve-wracking time in repo markets because banks typically limit activity such as repo, in order to ensure that their annual reports demonstrate their good financial health and robust financial measures. They have been under pressure due to a slew of rules such as Basel III’s liquidity coverage ratio which require banks to hold a sufficient quantity of high-quality liquid assets.

December 2016 was universally dubbed ‘unprecedented’. It saw a confluence of the ECB draining much in-demand, high-quality liquid assets out of the system while some banks were behind the curve in fully getting to grips with the with the post-financial crisis regulatory regime for derivatives trading and collateral management. The market did not suffer such a ruction even during the collapse of Lehman Brothers in 2008 and the European sovereign debt crisis of 2011-12.

Hill notes that there could be end of year problems in 2017 due to the existence of bank levies in a number of European jurisdictions and even an additional tax on non-bank secured funding in one jurisdiction. These are based on year-end snapshots of balance sheet and have also been cited as potential factors leading many banks closing their repo books. However, the ICMA report notes that it is difficult to find either anecdotal or statistical evidence to corroborate this. 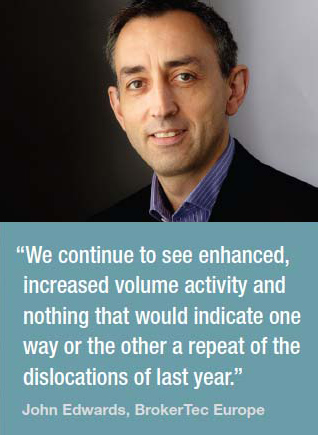 John Edwards, managing director for BrokerTec Europe (NEX Group’s global electronic fixed income trading platform) does not see anywhere near the same level of stresses building up in the repo market for year-end financing as in the previous past year. “We continue to see enhanced, increased volume activity and nothing that would indicate one way or the other a repeat of the dislocations of last year,” he says. “We have seen firms locking in funding and financing over at the year end and generally much better planning in the market that will hopefully alleviate any significant strains on supply.”

Last December, the ECB launched a programme to accept cash rather than just bonds as collateral for lending out its government debt although it did impose a cap of E50 billion. At the time, the central bank borrowing had reached a sizeable E1.2 trillion of assets but today that figure has leapt to E2.1 trillion.

Keenan believes that the ECB opening its door late last year to cash collateral was a positive way of preventing a recurrence of the market dislocation. “In my opinion, this will give considerable support to the market for this year end,” he adds.

The other reason why this year may have a different ending is because demand for balance sheet has reduced, according to Nicola Danese, responsible for the EMEA fixed income financing desk at JP Morgan.

“One reason is that leveraged players this time last year took positions ahead of the election cycle in 2017, which saw Germany, Netherlands and France go to the polls,” he says. “Positioning is certainly lighter this year. Market liquidity has also improved on the supply side, possibly because of more balance sheet availability from traditional and new repo players.”

A possible additional pressure could come via the net stable funding ratio (NSFR) – one of Basel’s two liquidity ratios – which require banks to hold a minimum amount of term funding appropriate to their assets and off-balance sheet activities will drive up costs, however the exact design of the rule is still uncertain and an implementation date has yet to be decided. Moreover, the US Treasury Department has called on regulators to delay implementation as part of the overall Trump administration review of financial regulation.

If it does pass through the EU, it will be introduced via the revised Capital Requirements Regulation or CRR II and is likely to be a lengthy approval process.

“At the moment, it is difficult to quantify the impact of the NSFR and the market is not pricing it in but it could put more pressure on the repo markets which means that balance sheet efficiency will be more important than ever,” says Hill.

Danese adds, “The implementation date is not entirely clear and it will likely be the middle of next year before we get any guidance. Also, the US has put the initiative on hold and as a result we may see European regulators consider their position.” 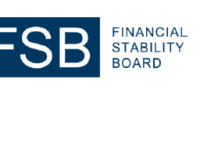