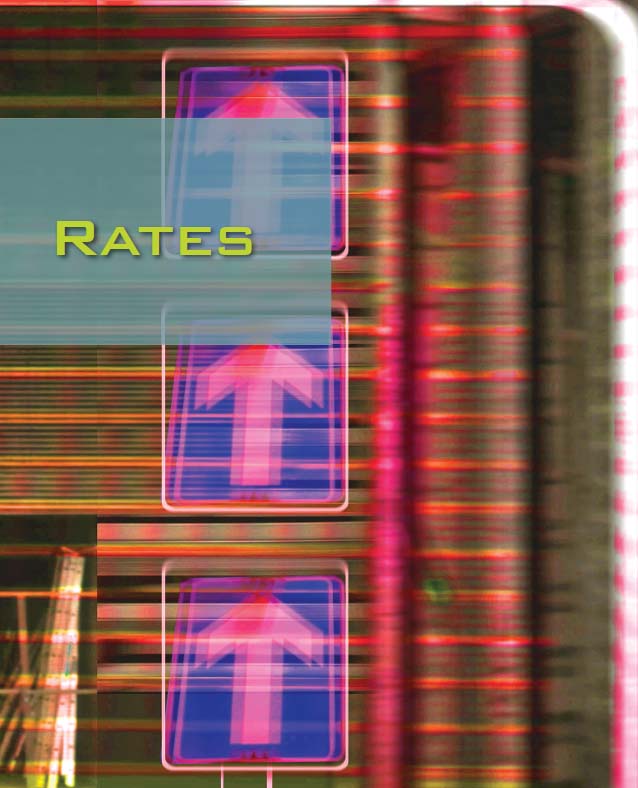 Electronic trading of European government bonds may face a natural barrier, as a consequence of the diverse issuer base. Growth in electronic trading has remained steady over recent years, at around 60 percent of total ticket volumes in the dealer-to-client segment, despite the best efforts of platforms to take market share. With the MiFID transparency rules set to increase the allure of electronic venues from the beginning of next year, some market participants are predicting an uptick. Others, however, are less sure. 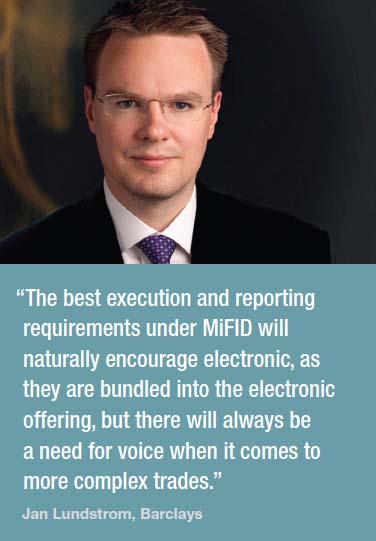 “For as long as I can remember now, the proportion of European govvies traded electronically has been stuck at about the same level,” said Jan Lundstrom, head of euro rates trading at Barclays. “The derivatives space, by contrast, has seen a huge leap in electronic trading, but in cash it has been very steady, with the space pretty much dominated by the two largest platforms and by request-for-quote (RFQ) protocols.”

Average daily turnover in the euro-denominated sovereign bond market fell last year by 7.2 percent, according to the Association for Financial Markets in Europe (AFME), which followed an 8.4 percent decline the year before. The main reason was the E1.8 trillion of securities bought by the European Central Bank (ECB) under its public sector purchase programme, but there are deeper reasons for fading liquidity, including the rising capital cost to banks of holding inventory, which has led to a predominantly agency model of market making, and buy-and-hold behaviours among investors.

Data provider Trax shows the trade count across the European bond market, at 1.66 million in the third quarter was its lowest level since at least the first quarter of 2015, when it was 2.3 million. Compared with the same period last year the drop was 8.9 percent. Average daily volumes were similarly down, falling to around E85 billion in the third quarter, compared with E100 billion a year previously. Government bonds make up about 80 percent of the total European market.

The liquidity aggregating power of technology should be a solution to the challenge of the liquidity challenges in euro-denominated bond markets, but there appears to be a hard ceiling on its take-up.

The trajectory of electronic trading in Europe has been upwards, and today’s markets are a far cry from the early noughties, when some market participants remember a far less technically sophisticated way of working.

“Back in the day there was very little connectivity, so you had to manually send down orders on the phone, with govvies trading on OWICs and BWICS, which even at the time seemed archaic and inefficient,” said Adrian Berwick, head of trading, Dublin and London at Amundi. “Since then we have incrementally traded more electronically, rising to around 50 percent post 2008 and now more than 85 to 90 percent in terms of tickets, as opposed to volume, in government bonds”

Electronic trading works well for ticket sizes in the E25 million region in government bonds, but can be tougher, though not impossible, for large sizes of up to E250 million, Berwick said.

“We would probably go out to two or three brokers on platforms in larger sizes,” he said. “We wouldn’t go much more than that because then you potentially can lose control of the order and the pricing. The way things are going with MiFID there is a desire to do as much as possible on platforms, but there is obviously a limit – when it comes to size or complexity, for example in a packaged trade involving a futures leg or asset swap, you need to connect with people on the sell side who know what they are talking about.”

As more trading has moved online, pricing has fallen for on-the-run bonds on widely traded govvies. For example, a five-year German benchmark was priced in recent trading on a yield basis of 0.246 offer against 0.247 bid. Of course, lesser-traded names are much less consistent. The bid offer on peripheral bond markets on off the run can be anything from 0.005 bps to 4 basis points in terms of yield.

With MiFID set to impose new requirements for pre-trade, trading and post-trade, electronic platforms in Europe have put in place new protocols to ensure clients remain compliant, for example by making adjustments to RFQ processes to make all firm quotes public between the time when the client actions a trade and exchanges trade messages. Platforms are also pushing hard to sell their straight-through-processing credentials to the buy side, often connecting to pre- and post-trade order management systems and offering rules-based execution to improve efficiency.

“Our automated intelligent execution (AiEx) tool routes orders directly from clients’ Order Management Systems to be executed according to parameters defined by their trading desks. Around 17 percent of European government bond orders are executed that way, while more than 90 percent of tickets are processed via integrated links,” said Enrico Bruni, MD and head of Tradeweb’s Europe and Asia business.

“There is a spectrum of protocols from fully-electronic RFQ to Click to Trade, and the time to quote on the platform is less than three seconds on average.”

Tradeweb has seen its European government bond trading business grow from around E1.5 trillion in 2010, representing around 405,000 tickets, to E2.7 trillion year to date, comprising more than 660,000 tickets.

“Growth is steady,” said Bruni. “Certainly, in Europe the gilts market is moving rapidly towards electronic execution, and we are starting to see a MiFID II tailwind.”

Of course, while platforms see the future in terms of seamless and joined-up execution in government bonds’ markets, the reality back on the trading desk of most buy-side firms is still some way behind that vision.

“The European sovereign market is very fragmented so historically you didn’t have a single platform where you had all your workflow,” said Carl James, global head of fixed income trading at Pictet Asset Management. “I would phone broker X because he is good at German Bunds, or maybe for Spain someone based in Spain, so there was less incentive to invest in platforms, and you would also be getting live axes pumped in, so you know who is good in a particular space.

Still, the impact of regulation and the falling cost of technology has made platform trading more attractive over time. Under MiFID II, investment firms are required to show they have taken ‘sufficient steps’ to obtain best execution for their client, which in the UK is higher than the existing overarching standard of taking ‘reasonable steps’.

“Now, to cut operational friction and comply with the ‘sufficient steps’ requirements under MiFID, attitudes are changing fast and electronic platforms have a much more important role, and you can go either partially electronic or fully electronic depending on what you need,” he says, noting the move toward electronic is much more pronounced in the most liquid markets.

“If you want to do something relatively exotic like Norwegian govvies then you would still probably look for that niche broker,” he adds.

The diversity of the European marketplace is probably the primary reason that many market participants say that electronic trading has limited potential, for example compared with the much more commoditised and industrialised US Treasury market. According to a January 2016 report from the Bank for International Settlements, electronic trading in the US Treasury market was at around 70 percent at that time, compared with 60 percent of EGBs.

“The best execution and reporting requirements under MiFID will naturally encourage electronic, as they are bundled into the electronic offering,” said Barclay’s Lundstrom. “But there will always be a need for voice when it comes to more complex trades or where individual dealers have strength in providing specific pieces of liquidity.”