A few platforms have consistently gained buy-side confidence over the last five years, through smart assistance and simplification of trading workflow.

The three ‘O’s of success in corporate bond platforms have been openness, order types and ‘oughta-mation’, smart systems that help you work out when or where you ought to trade. Buy- and sell-side firms have consistently proven themselves open to new ideas and been supporters of innovation where these elements have been present. The leaders in the platform space have left a trail of competitors in their wake (See box ‘Platform closures over five years’).

The challenge that the platforms developers are seeking to address is a structural one. Lower turnover in the corporate bond market has driven up the cost of liquidity in secondary trading. The cause is a reduction of hedge fund and bank trading activity. 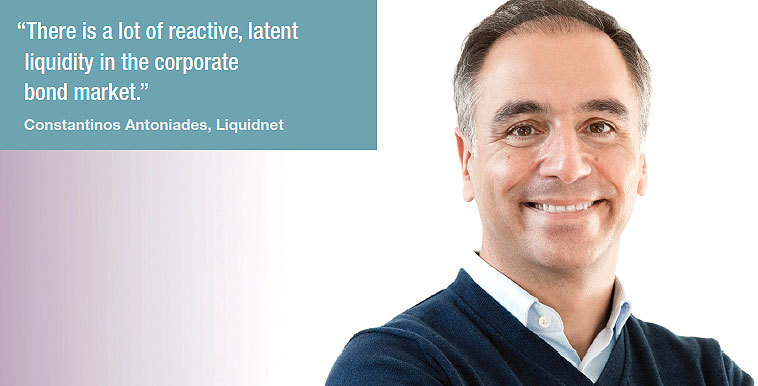 “There is a lot of reactive, latent liquidity in the corporate bond market where they are not actively buying or selling, but would be if the opportunity arose and they were aware of it,” says Constantinos Antoniades, global head of fixed income at block trading specialist Liquidnet.

“Buy-side discussions are increasingly around automation and improvement of order flow, which can be related to the fee pressure on asset managers,” says Christophe Roupie, head of Asia and Europe for MarketAxess. “There is a top-down pressure to optimise as both clients and management look at the full cost of managing the funds.”

The most constant factor in success has been that of an existing liquidity pool, which has been maintained in the face of growing competition. The ‘big three’ of five years ago – Bloomberg, MarketAxess and Tradeweb – are now more entrenched than ever. 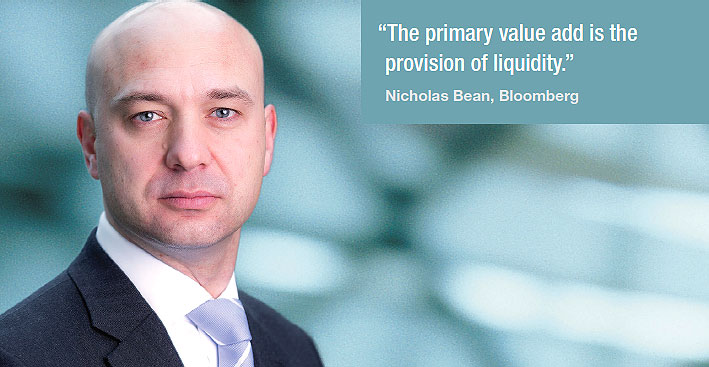 Nicholas Bean, Bloomberg’s global head of fixed income trading says, “As always, the primary value add is the provision of liquidity. Secondary to this is functionality. Most recently we’ve observed a developing interest in functionality to help meet regulatory objectives up and down stream of the act of execution. These are typically technically subtle, but advantageous to the client.”

Regulators have explicitly set out to support electronic markets in both cash and derivative instruments which has helped to boost the incumbents.

Bean says, “Electronic trading activity is notably up on a year-on-year basis. This is driven by market volume, but also the ‘convenience’ that electronic trading on-venue provides with respect to meeting the array of direct and indirect regulatory obligations.”

That has also proven a rich vein to be tapped by non-incumbent platforms which are building up greater support.

Mark Goodman, global head of Electronic Trading for FX, Rates and Credit at UBS says, “The proportion of our liquidity left by clients in January was 45% up against the Q4 monthly average. That is excluding traditional market makers who leave prices on Bond Port. That’s a significant change in behaviour, in part driven by MiFID II.”

Order types While liquidity or data is the key component that users seek out, they are won over in the fight between incumbents and challengers by the attractiveness of a platform’s functionality and the ease with which it can be adopted by asset managers and broker-dealers.

MarketAxess has championed all-to-all trading via its Open Trading protocol, but the firm has kept a close eye on the changing client demand and captured the increased internal crossing that buy-side firms are engaging with, and in Europe the need to process voice trades.

“Efficiency must include crossing, for which we launched a protocol last year,” says Roupie. “From an efficiency perspective, investors need a reference price on which to cross, based on real data, so we have been able to offer the market a very efficient process for crossing by leveraging our composite price. We also offer a ‘process trades’ solution as we believe we can add more efficiency for investors, and auto-execution of orders which is becoming more relevant to bond trading.”

The liquidity picture of the corporate bond markets, which sees episodic bursts of secondary liquidity and a constant search for new instruments as existing bonds mature, is very different to that found in equities and Liquidnet’s adaptation from the equity markets has seen it offer and adapt new order types in order to support client activity. Amongst these are the Virtual High Touch (VHT) workflow and an adaptation of the firm’s equity ‘Surge’ order type which has been repurposed for fixed income.

“VHT workflow is the first intelligent execution workflow of its kind, like a smart workflow assistant,” says Antoniades. “When orders are sent to Liquidnet, we look at the data, overlay it with your preferences, and make suggestions as to what different orders should do dependent on their type.”

The firm claims to have about 600+ users two and a half months after its launch in November 2017, which is three times higher than its initial prediction.

The adaptation of its equity ‘Surge’ order type is functionality that allows one side of a dark trade that still has more size to display, capped size at the trade price after the dark trade, in order to access any additional reactive liquidity that may be generated after the trade is posted, for example on TRACE.

Oughta-mation and automation Amongst pre-trade liquidity search tools, one of the leaders in the field, Algomi, has supported oughta-mation through the acquisition of Alfa, developed by AllianceBernstein to identify where to trade. Algomi, which now has several offerings in the pre-trade space, has the potential to automate that process, in essence become a smart order router, which may well become the firm’s next step.

UBS, which has stood out amongst the bank platform providers within survey results, has avoided the fate of many on the closure list by offering an order router, Bond Port, which routes to venues or systematic internalisers, depending on where liquidity is and if it is executing aggressively or passively.

Where pre-trade data providers and order routers have an edge is in the openness they offer to firms trying to seek out liquidity in an over-the-counter market. This flexibility has been a winner for traders who want to avoid being boxed in by a provider. As a result, platforms which have successfully negotiated interconnectivity via application programming interfaces (APIs) have often been winners.

“There is increasing interest from clients in API execution, often coupled with a desire for automation capabilities,” notes Bean. “Electronic trading activity is up. However, the breadth of clients with an interest in ET has also widened. We’ve always welcomed all participants, subject to participant qualification, KYC, etc, large or small.”

With comfort around electronic trading growing across the street, automation of trading strategies is taking small but steady steps forward, in line with the commercial pressure to reduce trading costs.

Roupie says, “Our auto-execution approach is about efficiency, including quality reference data, and how you can put in place an order routing methodology that allows our clients to take into account low touch and high touch flows.”

Looking ahead, one might be forgiven for thinking that the passing of MiFID II as an encouragement will see a plateauing of platform use. However, there is a natural appetite for e-trading as markets get choppier, which will increase as rates rise.

“Electronic trading volume increases in fixed income during volatility, unlike in equities, so we saw volumes increase by 20% during the recent market disruption,” says Goodman. “People go to the platforms because they need liquidity during times of stress, not just as a strategy to avoid information leakage, or to trade in smaller size.” 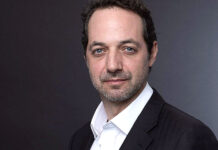 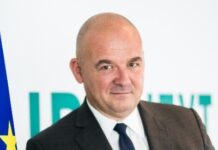 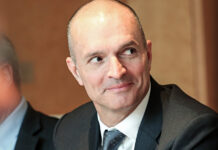