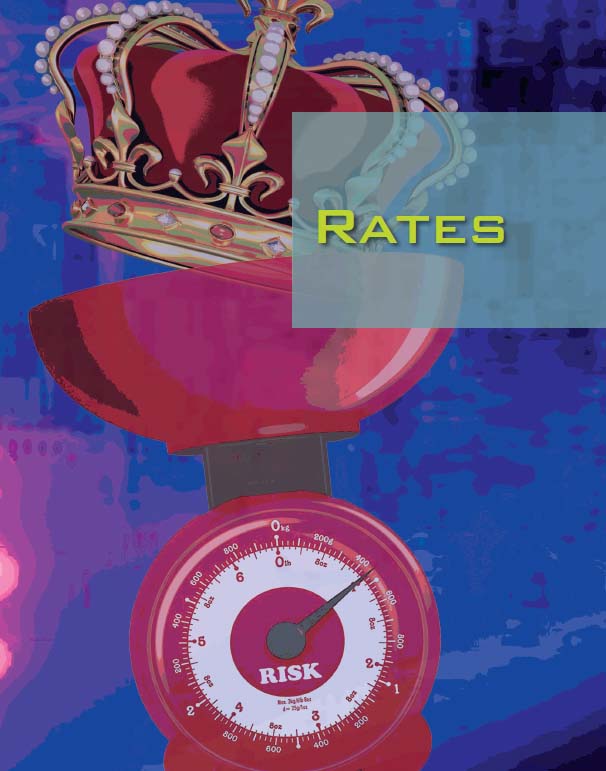 One of the lessons of recent European economic history is that the phrase ‘risk free’ is a misnomer. Multiple bank and sovereign failures have convinced most market participants that even government debt, theoretically the least risky asset, poses a credible threat of losses. However, proposals to introduce a new system of risk weights for E2.3 trillion of European sovereign debt are getting a mixed reaction.

In the four years since holders of Greek government debt lost more than half their money via a ‘haircut’, European policy makers have published three big papers on dropping the zero risk-weighting on sovereign bonds. However, any new rule is likely to punish the biggest holders of the debt of riskier sovereigns, which invariably are domestic banks. That has led to opposition in those countries, and a policy stalemate.

“Many banks in southern Europe are sitting on large amount of sovereign debt and it’s pretty clear that those countries are never going to accept a move from the current position, which is from a risk weighting basis where every country in the euro area is treated equally,” said Gianluca Salford, a senior European fixed income strategist at JP Morgan. “If you risk weight sovereign bonds, you are basically asking those banks to find a new business model because ultimately you are going to need a lot more capital or you are going to need to sell those securities, and it’s not obvious who the buyer would be.”

European banks routinely hold as much as 65 percent of their government’s total debt, according to Fitch Ratings, and the impositions of risk weights would lead to around E15 billion of additional capital requirements. An alternative would be mass forced sales, which would lift borrowing costs and undermine banks’ efforts to accumulate assets for the purposes of the Basel III Liquidity Coverage Ratio.

In a paper on plans to deepen European economic and monetary union, published in May 2017, the European Commission (EC) emphasised the systemic risks resulting from the umbilical cord between banks and their sovereigns, in which financing costs are highly correlated. However, on the prospect of a new regulatory environment, it recognised both sides of the argument.

“The regulatory treatment of sovereign debt is a politically and economically complex issue,” it said. “Like in other advanced economies, EU banking legislation currently foresees the general principle of a risk-free status for sovereign bonds.”

This is justified by their particular role in funding public expenditure and in providing a low risk asset for the financial system of the country concerned. At the same time, such a treatment does not provide any incentives for a bank to diversify its holdings away from home-sovereign bonds. If that treatment was changed, euro area banks would most probably react by sharply reducing their holdings of sovereign bonds. This would disrupt not only the functioning of their home financial systems. It would potentially also impact on financial stability for the euro area as a whole.

“At the same time, such a reform, if implemented wisely and gradually, could increase incentives for governments to reduce the risk profile connected to their own bonds,” it noted.

Sweden gets real
With the European Union firmly on the fence, some countries have gone ahead and introduced their own solutions. The most recent was Sweden, which this year implemented a 2015 decision to ask banks to move from standardised to internal models to calculate capital requirements, in effect annulling the zero risk weightings prescribed in the standardised approach. The banks have been working to refine their methodologies, and both SEB and Nordea first reported adding additional capital in their second quarter 2017 results, despite facing challenges in making the transition. 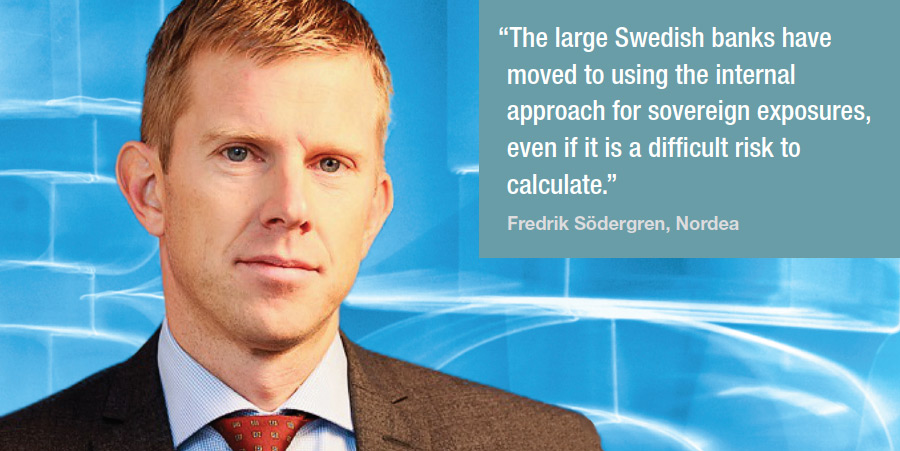 “The large Swedish banks have moved to using the internal approach for sovereign exposures, even if it is a difficult risk to calculate,” said Fredrik Södergren, head of ALM Regulations at Nordea in Stockholm. “One challenge is the lack of default data and the inclusion of central banks in the sovereign exposure class.”

Sweden is not the first country to act on risk weights; in 2014 Belgian banks starting assigning weights to their portfolios, following a request by the Belgian central bank. In addition, some individual banks, particularly in the UK, have introduced their own risk weights, usually somewhere below five percent.

From the investor perspective, there are mixed feelings about the new approaches. On the one hand, fund managers see the acknowledgement of risk in lending to governments as a kind of natural justice. On the other hand, however, there is concern over the broader implications for the asset class.

“If you go back ten years to the financial crisis, one of the biggest problems was that people piled into triple A-rated assets with zero percent risk weightings and did not think about credit risk at all, which was a big mistake,” said Ulf Erlandsson, head of fixed income at Strukturinvest. “Even in the SSA space we have seen stuff that is zero risk weighted blow up. If you came down from Mars and saw that these bonds that are risky are not given a risk weighting, then you would be very surprised.”

From an end-investor perspective, fund managers have a duty to consider the real risk in assets they hold, and even where there is no default risk the volatility risk is extreme, in some cases equalling the impact of a partial default, Erlandsson said.

In addition, the fact of a zero risk weighting is distorting the market, encouraging investors into an asset class that on merit may not be justified, he said.

“Even in the case of rising interest rates you can see huge capital losses on sovereign bonds, so for me there should be a risk weighting and that risk weighting should take into account market risk as well as default risk,” said Erlandsson. The potential of additional trading costs should be welcomed, he said, because it would move the market away from the current situation of mispriced risk.

Too late?
Still, not all investors are equally as convinced, and some point to an improving fiscal situation in Europe that suggests moves to risk weight sovereign exposures may have missed the boat.

“The sovereign position in Europe is improving rapidly, and even Greece is back into a fiscal surplus, so you can see why policy makers are taking a pause for thought,” said Luke Hickmore, senior investment manager at Aberdeen Standard Investments. “Also, it might be the case that risk weightings would add additional stress to the banking system, which is not desirable.”

Still, from a liquidity perspective the addition of risk weightings will probably not make a huge difference, Hickmore said, because the asset class is coming from a position of such high natural liquidity compared with other asset classes.

Among the many arguments against risk weighting of European sovereigns, the most intractable to date is over the apparent impossibility of creating a level playing field, and that has been reflected in the level of political support in different countries. Holland and Germany are among the most vociferous supporters, while Italy and Spain have made clear that they are much less amenable.

Unlike nations that are not part of a currency bloc, European countries cannot simply print money to pay off sovereign debt, which means they are more exposed to their domestic economic situation. Still, policy makers are keen to press ahead.

“On a European policy level, there is a desire to pursue the thing, and the move is seen as a central plank of Europe’s plan to press ahead with a capital markets and banking union,” said Ciaran O’Hagan a fixed income strategist and senior economist at Societe Generale in Paris. “But it’s a can of worms because the cost implications may be disruptive.”

One compromise under consideration is to create a new type of pan-European sovereign debt, which would not explicitly mutualise the risks that countries face, but could allow banks to load up on low-risk bonds that do not carry domestically driven risk weights.

In its recent paper the European Commission discusses the possibility of European Safe Bonds, or ‘ESBies’, which may eventually become an effective risk-sharing vehicle for Euro area member states, and which in some quarters may be seen to be a desirable move towards a more federal approach to the European union.

The proposed ESBie structure is very close to a simple CDO of sovereign bonds. Existing bonds issued by various Euro area sovereigns would be repackaged into liabilities to be issued by a private or public entity, and sold back to the market in the form of two or more tranches with differing levels of seniority. ESBies would be sold as the senior-most tranche of risk, with European Junior Bonds (EJBies) serving as a first loss cushion within the capital structure, similar to conventional securitisations.

ESBies would increase the supply of ‘risk-free’ assets in the Euro area and weaken the ‘diabolic loop’ between sovereigns and their domestic banks. Crucially under the proposal each sovereign would remain responsible for its issuance, which would avoid undermining member state responsibility for fiscal and funding policy. There is uncertainty on some issues, for example over how the bonds will be rated, how they will withstand a crisis situation and over liquidity. But the concept is seen by some as an effective compromise.

“The safe bond idea offers a bridge, or a kind of sweetener, in that it enables the eurozone to address some of the issues connected with risky sovereign debt without punishing the periphery,” said JP Morgan’s Salford. “It provides an alternative to holding domestic debt and, for that reason, it might be more acceptable than the naked risk weighting proposal.”