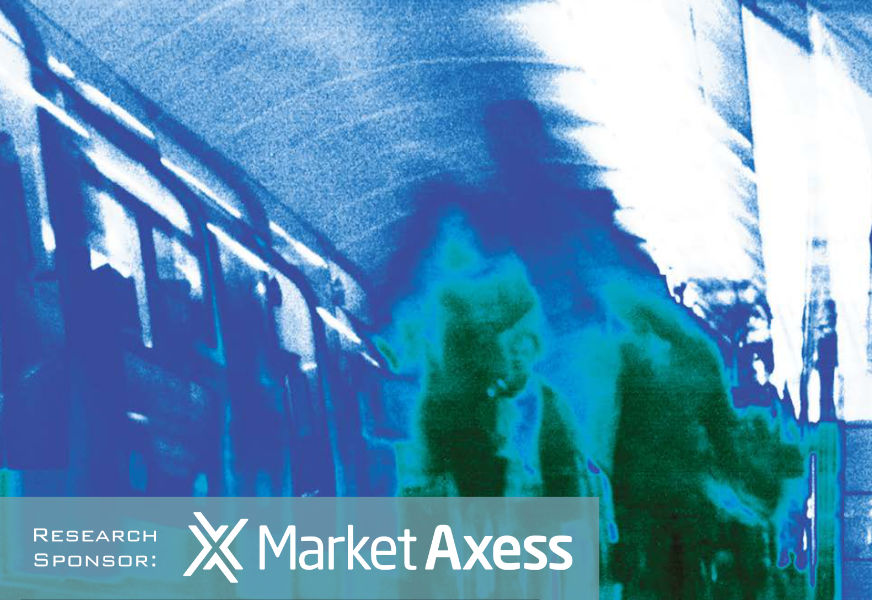 This year sees tighter pipelines for new business and a wider array of trading protocols.

Executive summary
One year on from the sell-off in Q1 2020, engagement with electronic trading has increased across the board.

MarketAxess’s tools continue to be perceived as the most effective at finding liquidity in credit markets today, and its trading venue is future-proofed with traders having greatest confidence in still using them out to 2025.

Tradeweb has significantly increased engagement since 2020 with double figure rises in use across its interface and its trading venue, plus the largest pipeline of traders planning to engage with it for pre-trade data and analytics.

New primary market tools are neck-and-neck in expected adoption making for some tough decisions on buy-side trading desks. Direct dealer connectivity continues to rise as a tool for executing trades, potentially representing the greatest threat to smaller platforms who are looking to get a foothold through more significant market share. 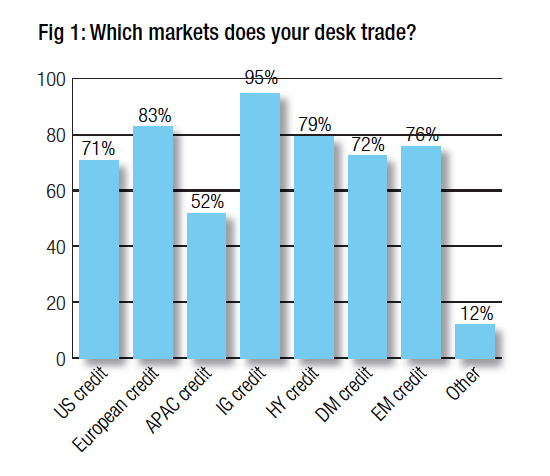 In this year’s survey, the fixed income trading teams of 59 major asset managers across the US, Europe and Asia Pacific told us which tools they are using, and plan to use, for accessing liquidity in the corporate bond space. An analysis of the markets they trade (Fig 1) indicates a greater representation of European and US traders, with investment grade bonds being most commonly traded. 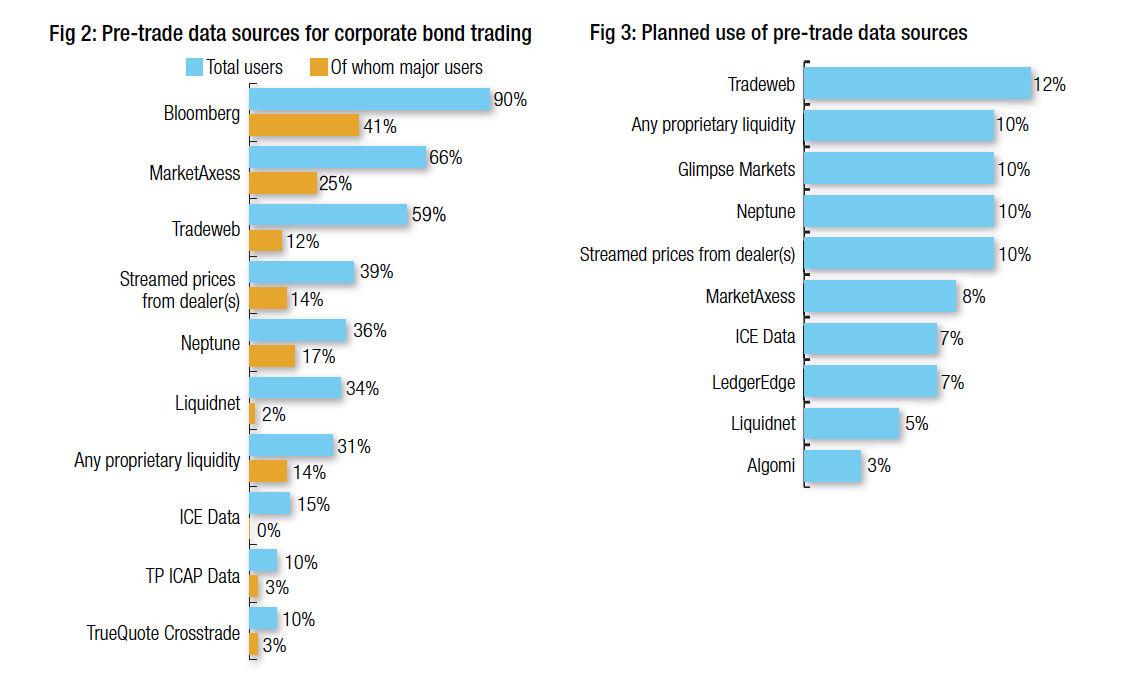 Neptune, as the most commonly used standalone pre-trade data source (i.e. being unconnected to a trading venue), saw its overall user base increase by seven percentage points. Both ICE (15% of respondents) and TP ICAP (10% of respondents) ranked highly this year having not charted in 2020. Truequote’s internal crossing tool Crosstrade has seen a slight drop in users but still has a 10% market share.

Looking at the pipeline for new business (Fig 3), Tradeweb is looking strong with 12% of respondents planning to use it for pre-trade data in the future while buy-side data sharing utility Glimpse Markets is looking interesting to 10% of investment managers.

Buy-side proprietary and sell-side data also each have a projected future use of +10% along with Neptune, which has more market share to capture. A notable new addition this year is LedgerEdge which is expected to offer an ‘ecosystem’ for bond trading rather than a specific platform, yet is clearly anticipated as providing more pre-trade transparency in the future.

Interfaces and GUIs
Traders reported having an average of five interfaces used to access credit markets, including a mix of execution/order management systems (E/OMSs) and trading venues. In two cases firms had ten possible interfaces to use which indicates efforts to provide connectivity between trading desk applications still have fertile ground on the buy-side desk. This average was in line with previous years. 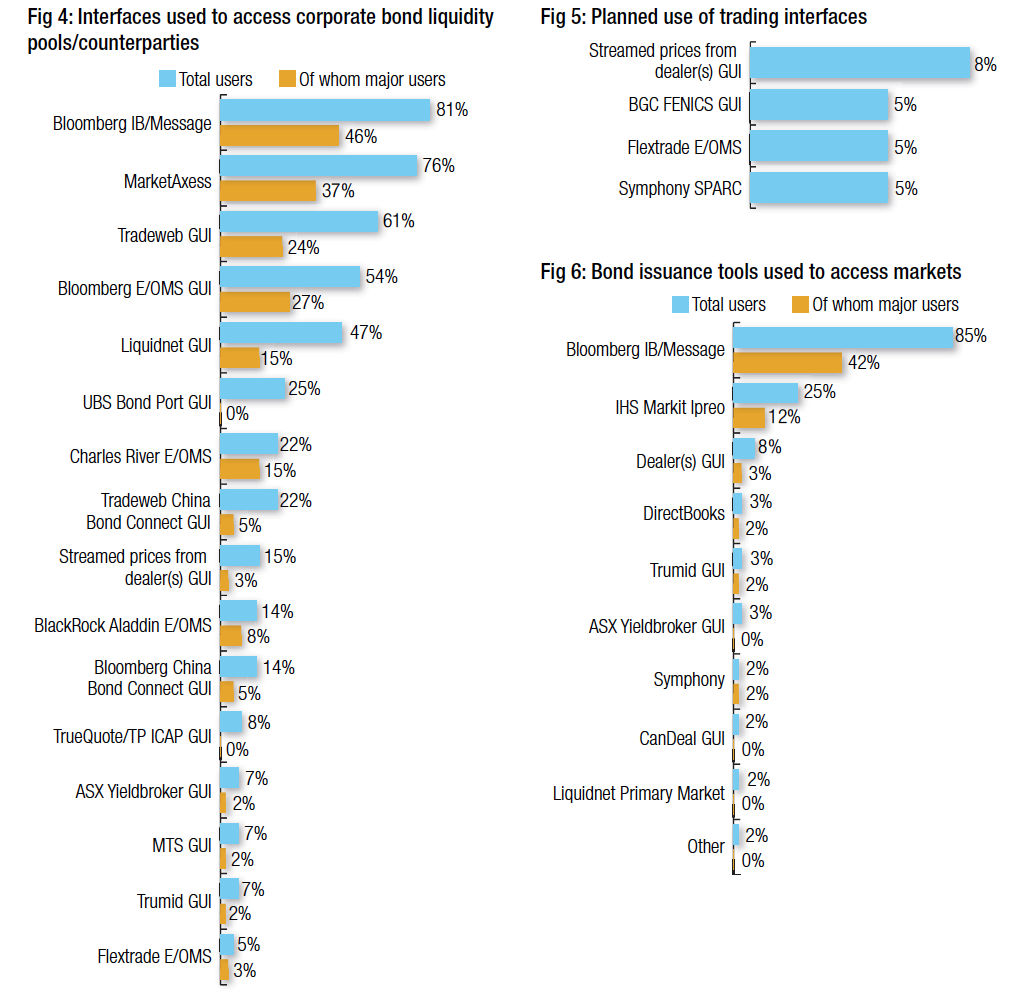 The most popular interface (Fig 4) continues to be Bloomberg’s IB/Messaging tools (81%) followed by MarketAxess, both of which had gained users over 2020, and then Tradeweb’s interface which leapt ten percentage points this year to third place, beating Bloomberg’s E/OMS, which saw a slight decline in reported users as did Liquidnet’s GUI.

Amongst E/OMSs Charles River and Flextrade were growth stories, as to a slight extent was BlackRock Aladdin. The challenge of making E/OMSs effective in bond trading still impedes the adoption of these tools, although greater connectivity with venues is enhancing functionality considerably.

Nevertheless, overall appetite for new interfaces is limited (Fig 5); direct dealer connectivity with dealers has the greatest pipeline for adoption (8%) while BGC Fenics, Flextrade and Symphony SPARC are each expected to be used by 5% of respondents.

Bond issuance tools
For the first year we have surveyed use and planned use of tools for managing the primary issuance process (Fig 6).

With the launch of new offerings by Liquidnet and sell-side consortium DirectBooks last year, this is the first assessment of buy-side appetite for these platforms. At present, Bloomberg Messaging and IB chat is the most commonly employed tool in this largely manual process. However, IHS Markit’s tools which provide an electronic workflow are also used by 25% of respondents, with nearly half of those categorising themselves as ‘major users’.

Direct dealer interfaces are used by 8% of buy-side traders. Alternative tools are in very early stages, but interestingly trading venue Trumid’s GUI is used to manage issuance by a few firms, which is as many as report already using DirectBooks. Communications network Symphony and Liquidnet are also being used at low levels. The bigger question of which platforms have a pipeline of interest shows a hard-fought contest (Fig 7). In the lead is DirectBooks with 31% of buy-side traders planning to use it, and close behind is Liquidnet with 27% of traders expressing interest. Moreover, IHS Markit could add another 19% of buy-side firms to its existing user base which would give it a 44% market share if those plans converted to action.

Although, as yet, it has no primary market platform, 7% of respondents plan to use Symphony to handle new issues in the future, supporting CEO David Gurle’s assertion that there is market interest in it stepping forward.

This level of excitement in onboarding new platforms was last seen in 2016 when Algomi, Liquidnet and Neptune were still being adopted, reflecting the nascent market for primary market offerings. It is worth recalling that, in the case of Algomi, that appetite did not convert into real business while for Neptune and Liquidnet – currently being acquired by TP ICAP – it did. It will be interesting to see how adoption proceeds for new issue technologies, given the desire for a utility rather than multiple providers. 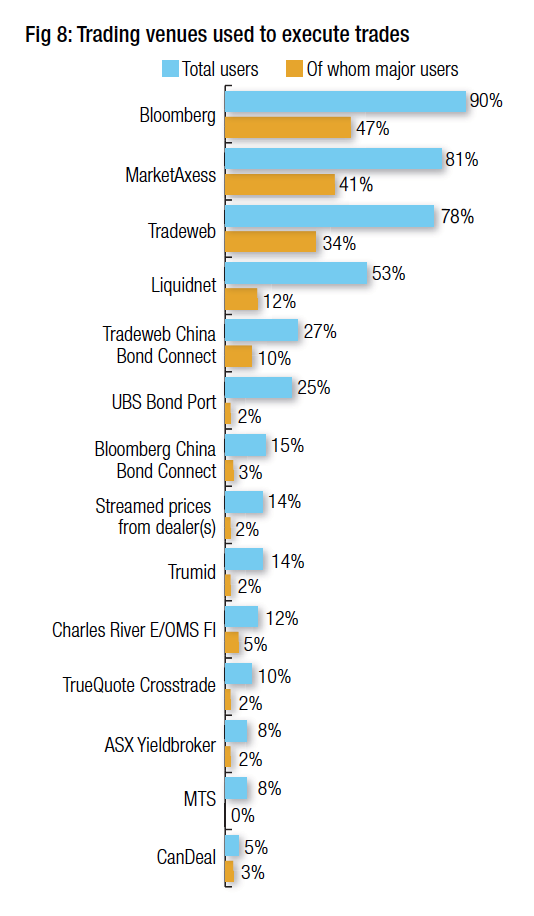 Also within the top ten, UBS Bond Port increased by one percentage point to 25% of users and Trumid rose another five percentage points since 2020 which pushes it further up the ranks of the big venues with a 14% user base.

Last year’s big growth story was Tradeweb’s China Bond Connect, which was new to the survey yet took a 24% share of users. Although it has only seen a modest increase in users in 2021, the number of traders who are now major users increased from 2% last year to 10% this year suggesting that it is proving valuable.

Bloomberg mirrored that to a lesser extent this year with major growth in its China Bond Connect venue, which has a user base of 15% having not charted last year.

Looking at the trading protocols most employed by traders (Fig 9), we see the proportion of request for quote (RFQ) trading has fallen since 2020, and all-to-all trading has increased across the board. 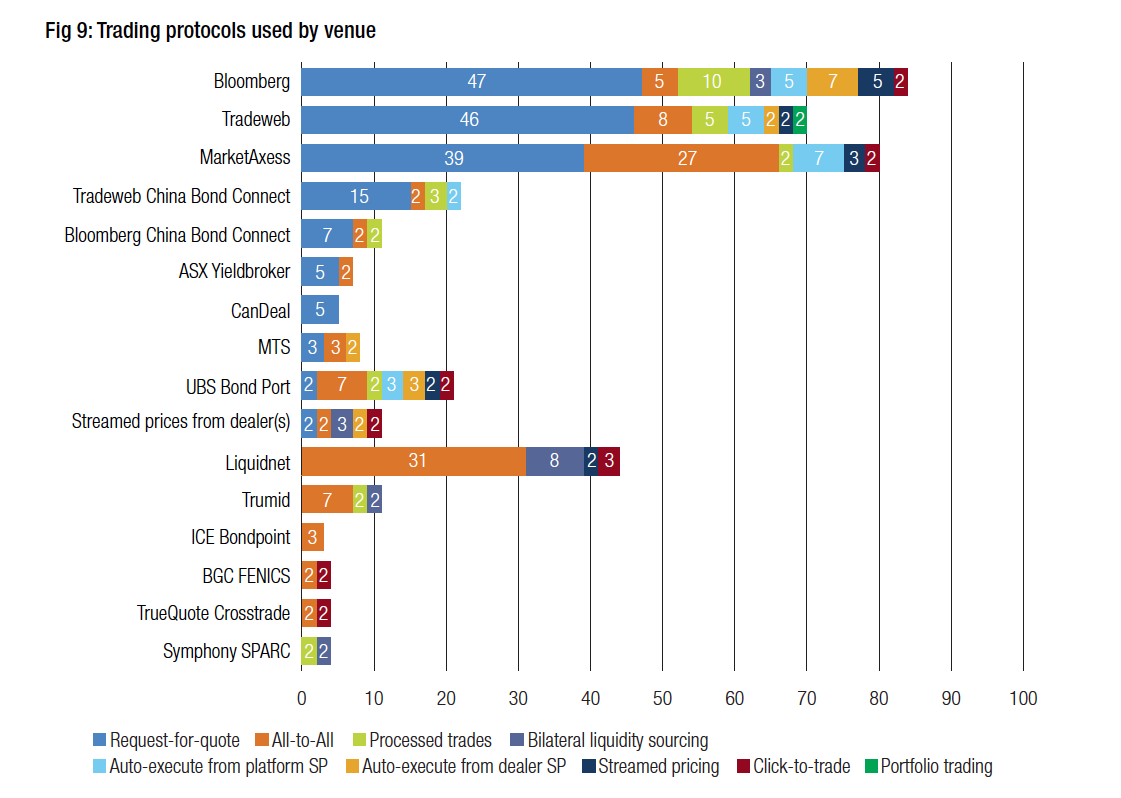 The leaders in the all-to-all space continue to be Liquidnet and MarketAxess, but Tradeweb has seen this become a preferred protocol for 8% of traders on its platform. Tradeweb was also the only venue to see portfolio trading become a preferred trading protocol, albeit for just 2% of respondents.

Trumid has seen a consistent proportion of all-to-all and bilateral trading reported as in 2020, while this year UBS BondPort increased all-to-all for its own offering.

Auto-execution is also seen on several platforms as the preferred protocol for some traders to use, reflecting a greater degree of comfort with data in the credit space. 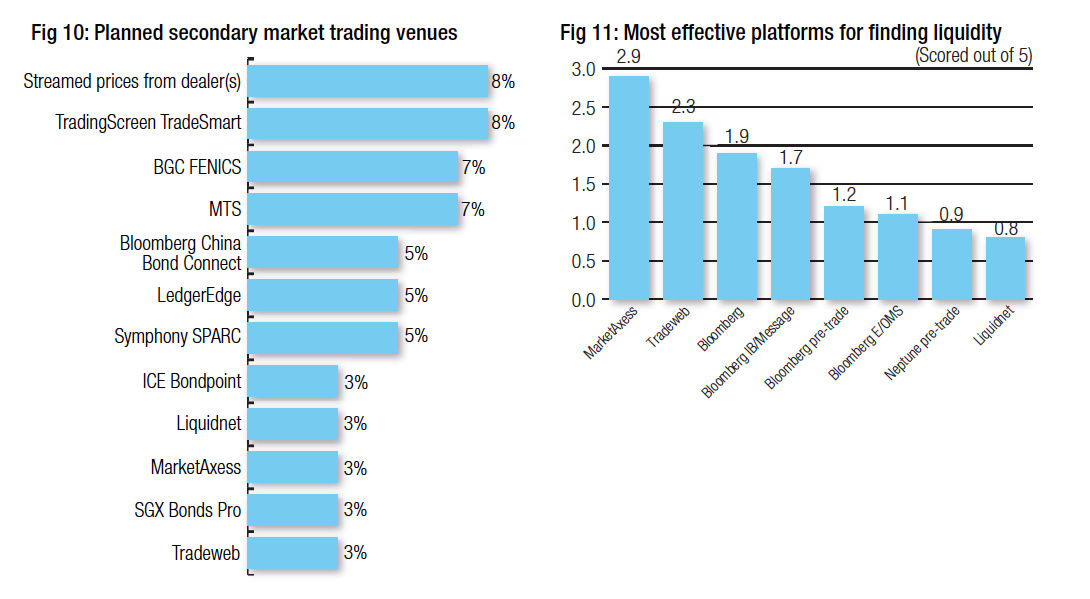 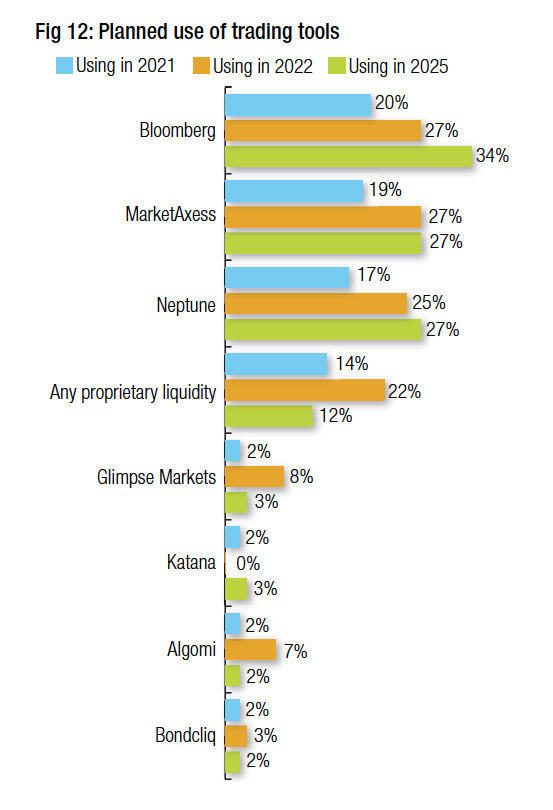 Beyond the user base of platforms, we also assess their value based on user reports. Of all pre-trade data and analytics, interfaces and trading venues, the MarketAxess trading venue was seen as the most effective (Fig 11), followed by Tradeweb and then Bloomberg across its venue, messaging/IB chat, pre-trade data support and E/OMS offering. Neptune was the most successful platform outside of the big three, followed by Liquidnet.

It is important to note that the scores this year represent a significantly greater spread of voting, with the concentration of confidence being far lower than in previous years.

Amongst pre-trade analytics and data sources (Fig 12), Bloomberg, MarketAxess and then Neptune exhibit the most confidence amongst traders over the next one, two and five years, with Glimpse Markets showing confidence over the medium term. 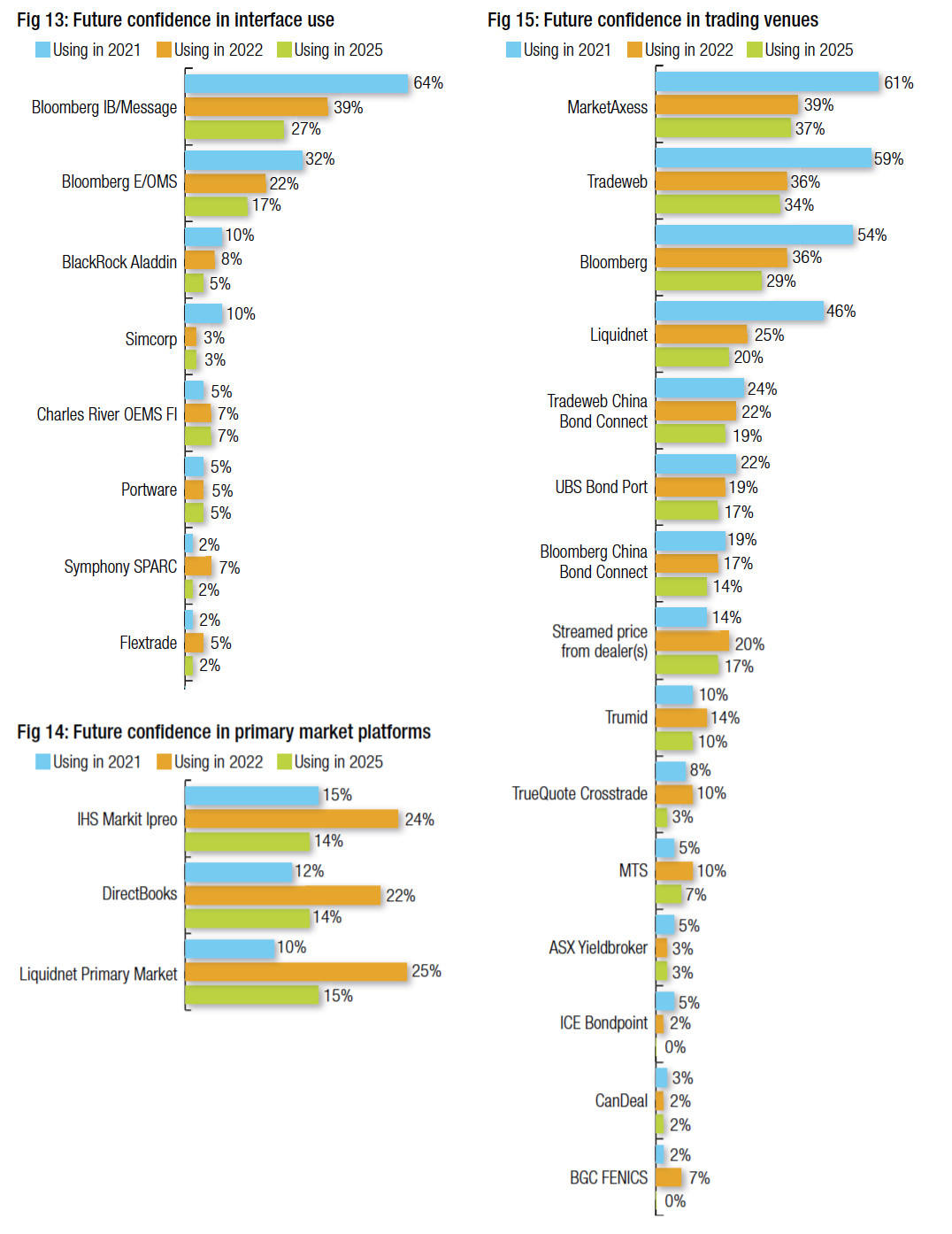 Confidence in primary markets platforms (Fig 14) is greatest in the mid-term, reflecting the typical ‘belly’ of mid-term confidence in a newly-contested market – over the short-term it is seen as ‘too soon to call’ with some hesitancy to engage, while longer term confidence also involves picking a winner. The most apparent trend in these three is the evenness with which they are expected to be used by buy-side traders.

Within secondary market trading venues (Fig 15), MarketAxess has the greatest confidence of buy-side traders for future use, followed closely by Tradeweb, both of which have overtaken Bloomberg, now in third place. Overall confidence levels are higher this year than last – for example MarketAxess is 12 percentage points higher than in 2020. Liquidnet retains its position as fourth most highly rated venue looking ahead, followed by Tradeweb China Bond Connect and UBS Bond Port. 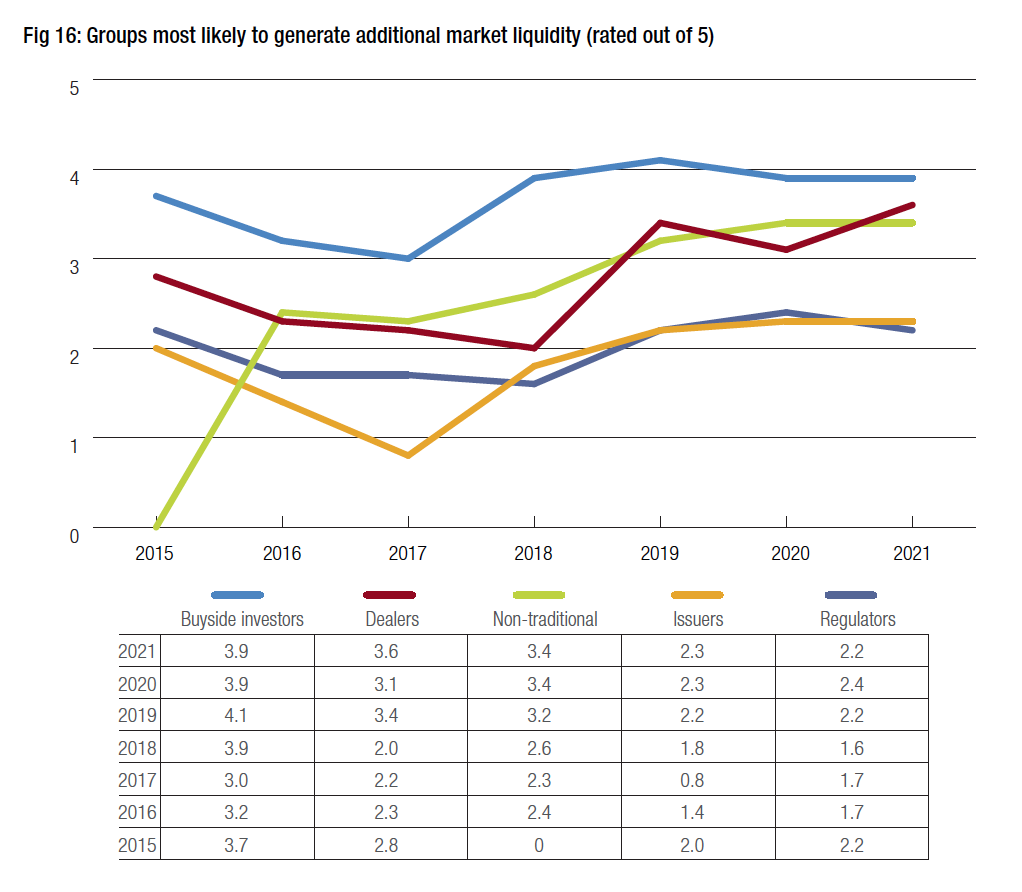 Confidence in the buy-side’s influence in generating liquidity over other groups is unchanged from last year, but the ability of sell-side dealers has continued to grow. This potentially reflects their increasingly direct engagement with clients for electronic trading but also the impact they had when withdrawing from the market in the March 2020 sell-off. 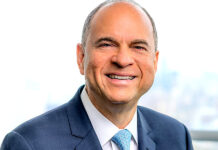 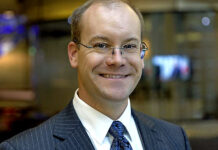 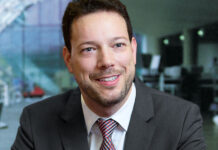 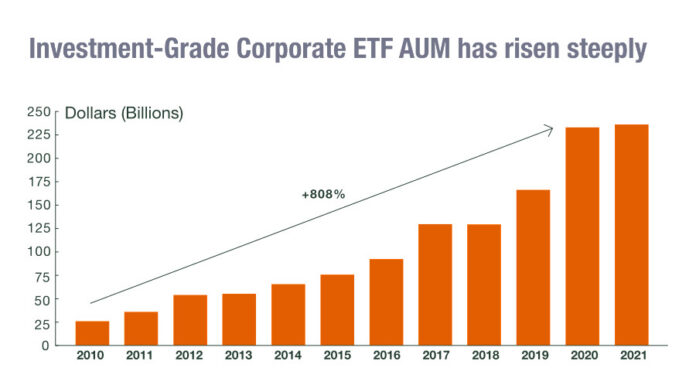