When investment flows are heavily directional it can make trading more challenging, as most investment firms are selling into a downward market or buying into a rising market. From a trading perspective this has two challenges.

Firstly, trades need to happen quickly to minimise implementation shortfall, or the price move between an order being placed and an order being completed.

Secondly, sell-side firms are reluctant to take a position which they can only exit by trading against the market, and will increase bid-ask spreads to compensate for the risk they are carrying. 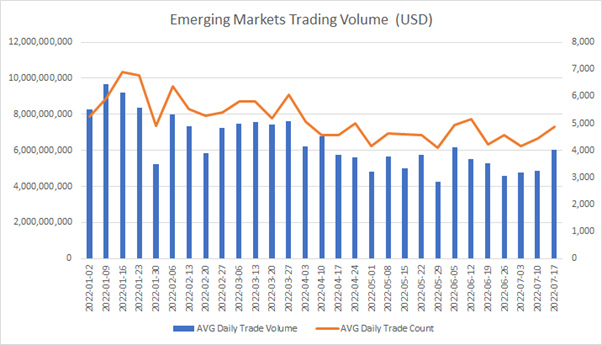 Looking at data from MarketAxess we can see these features being born out. Average daily trading volumes (ADV) in hard currency trading have fallen, at a greater rate than the average daily trade count suggesting that the average size of trades has fallen since the start of the year.

While volume is only a proxy for liquidity, there are clear signs that this is indicative of the challenges that trading desks are facing. As noted above, with the direction of trading being largely one sided, these volumes mask the real liquidity levels.

A further sign can be found in the bid ask spreads for hard currency EM trading, also found in MarketAxess data.

Here we see that the median bid-ask spread has increased from just above 5 basis points to nearly ten points in mid-July. At the same time the mean average has been bouncing about, but is currently at the same level as seen at the start of the year. The spikes in mean levels indicate the bid-ask spread has at points been far higher for certain parts of the market than average.

Collectively, high spreads, lower volumes with a disconnect from the trade count are clearly signs of the strains on the EM desk. 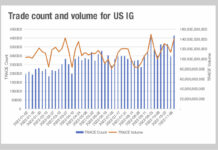 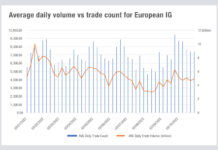 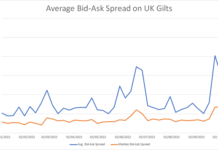