Technology spending by sell-side firms is a key factor to keeping and growing market share, according to a Greenwich Associates Report, entitled: ‘The Technology to Succeed in Fixed-Income Trading.’ 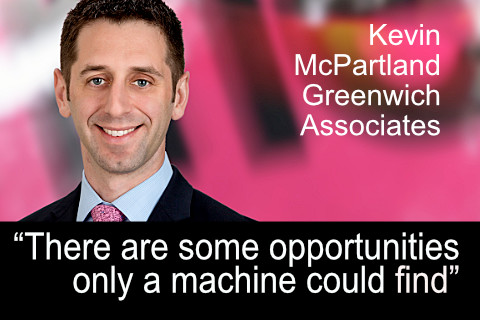 Greenwich Associates research shows the collective market share of those banks outside of the ‘top 10’ dealers accounted for 9% of investor government bond trading in 2012, but 17% in 2017, and the analyst firm argues that “technology leverage has aided in their upsurge.”

Sell-side firms are becoming more positive about the prospects of automation; in 2015 46% of bond dealers saw electronic trading as a threat to their business, yet in 2017 that number has dropped to only 21%, according to analysis by Greenwich Associates.

Kevin McPartland, author of the report and head of research for market structure and technology in an interview with The DESK highlights the added value that cutting-edge technology, broken down into client-facing and hedging offerings, provides to investors in a competitive environment.

“If you can autoquote and autohedge smaller sized trades with smaller clients, that’s one less thing a high-priced trader has to do,” said McPartland.

Autoquoting, real-time pricing streams and low-touch hedging tools are among the main areas of investment that cuts time and resources spent on day-to-day tasks; algorithms can price trades in milliseconds and internalization makes for more efficient hedging and risk management.

This kind of technology has traditionally been available through the biggest dealers, such as top US government bond dealer, Goldman Sachs, which allocates over $800 million annually on technology. According to Greenwich data, the top two dealers by market share have aggressively targeted tech spending, increasing it by one-third since 2013 while the top six US government bond dealers that handle over half of client trading by volume are spending nearly US$25 billion on technology annually, “allowing them to service customers more efficiently than anyone else.”

Those lacking the means to invest, are primarily “working with a patchwork of legacy technology loosely integrated with pieces from third-party software” which, if left unaddressed, could see them get left behind.

The report highlighted the potential found in third-party technology; JPMorgan is now outsourcing its US treasury trading business via Virtu, and future offerings set to see smaller dealers providing services such as sophisticated routing technology and execution algorithms.

Nonbank liquidity providers have seen their market share grow largely in part to investment in technology, focusing on providing “faster and tighter” prices,

With the largest dealers investing heavily in competitive technology, the rest of the market will need to follow if it wants to attract investors acutely aware of real-time pressures and profit margins.

“There are some opportunities that only a machine could find and communicate quickly enough to give that client an edge,” say McPartland.