In US credit, mean bid/ask spreads are skewing upwards from the median, indicating that a greater proportion of larger spreads are in some cases skewing the average upwards. The difference is greatest in high yield (HY) bonds, whose spreads are naturally are higher, but also have a considerably greater range of volatility, but the greatest change has been seen in investment grade (IG) bonds. 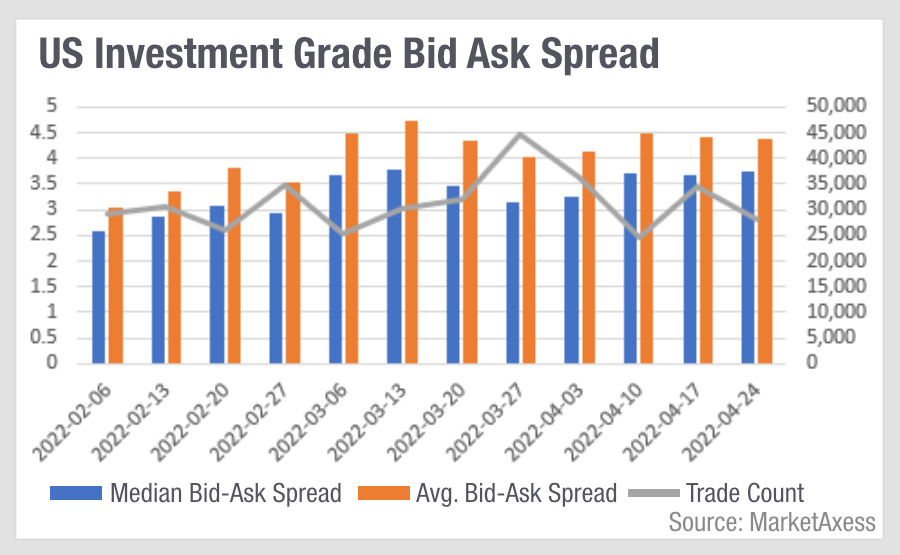 In the US, rising rates is the big story in bond markets, along with Federal Reserve’s balance sheet being cut by trillions of dollars. The first quarter did not look good for financial services institutions. Whether or not the Fed can prevent the country from going into recession remains to be seen.

Chair Jerome Powell said on 4 May, “It’s a strong economy and nothing about it suggests that it’s close to or vulnerable to a recession. Now, of course, given events around the world, and fading fiscal policy effects and higher rates, you could see some slower economic activity.”

Clearly with rates rising and concern around economic stability growing, there is a strong risk-off environment for most firms.

That directly hits market making, which has had several bumps in the road over the last five years in fixed income. For banks offering prices in the corporate bond space, the strain of taking risk is shown in the bid/ask spread, reflecting the cost of taking risk. 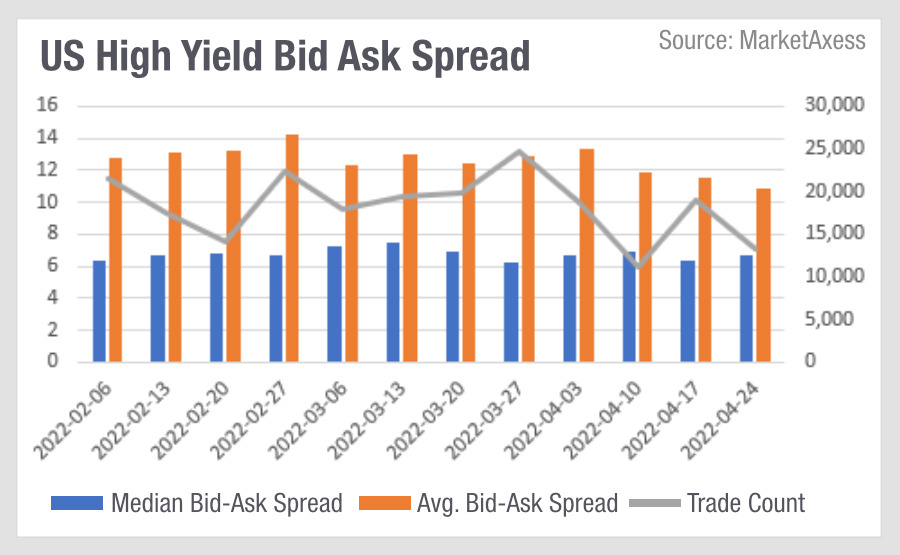 High yield bonds have a greater bid/ask spread than IG bonds, and at times the average (mean) bid/ask spread can be doble that of the median, showing that trading costs can really balloon for some HY bonds. Looking at MarketAxess data we can see that the median is range bound between 6-8 bps and the average between 11-13 bps. In February they were 6.4, by April this had reduced to 4.4

The median and average bid/ask spread for investment grade bonds are typically closer together. However in contrast to HY, in February, these were 0.4 bps and have expanded to 0.69 bps by the end of April.

This suggests that market making in IG credit might be starting to fray at the edges, with spreads increasing on the outer rim. Given the economics of the market that would not be too surprising; as many existing IG bonds will be offering a lower coupon than newly issued credit, dedicated bond portfolios will be looking to maximise their holdings of assets with a better return by selling out of positions, creating directional volume and making it harder for market makers to offset any positions they take on. 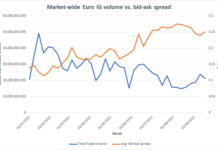 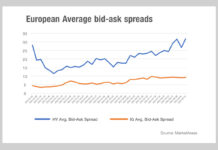 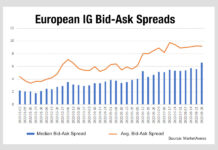