Return of muni futures shows the market’s got moxie.

The municipal bond market is addressing its problems head on and in doing so, defying regulatory intervention. Dan Barnes reports.

The municipal market is doing just fine on its own, thank you. That is the message being passed to the Securities and Exchange Commission (SEC) as its Fixed Income Market Structure Advisory Committee (FIMSAC) tries to engage in a meaningful way with municipal bond market participants.

At its most recent meeting in July 2018, FIMSAC was presented with a paper by the SEC’s Division of Economic and Risk Analysis (DERA) which made a case for increasing pre-trade transparency to support retail investors, which it said consistently received prices that were far from the best dealer prices quoted in the market.

However, the problems specifically highlighted by the SEC paper were torn down by Bernard Costello, head of municipal bond trading at Morgan Stanley, who observed at the July FIMSAC meeting that the paper sampled data from 2014, after which regulations had changed the rules around best execution for client orders.

“The biggest, glaring issue I have with this report is that we’ve had ground-breaking, sweeping changes in regulation with respect to municipal best execution,” he said. “Data points in this report are scathing. Scathing. Some of the spreads it talks about are nothing like I experience in the markets today. I take it you had multiple examples of where dealers are executing with traders at levels that are well below the advertised price on an ATS? This is explicitly illegal in the current environment.”

Reform on the table

Market participants acknowledge that there are issues that need to be tackled – it just happens the SEC picked the wrong one. Liquidity is a longstanding problem, impacted by increased access to data and capital adequacy rules which reduce banks’ risk taking, as well as issuance.

“Muni supply is down 18% year on year, creating similar levels of supply as we saw in 2011 and 2012,” says Karen Schenone, fixed income product strategist at BlackRock. 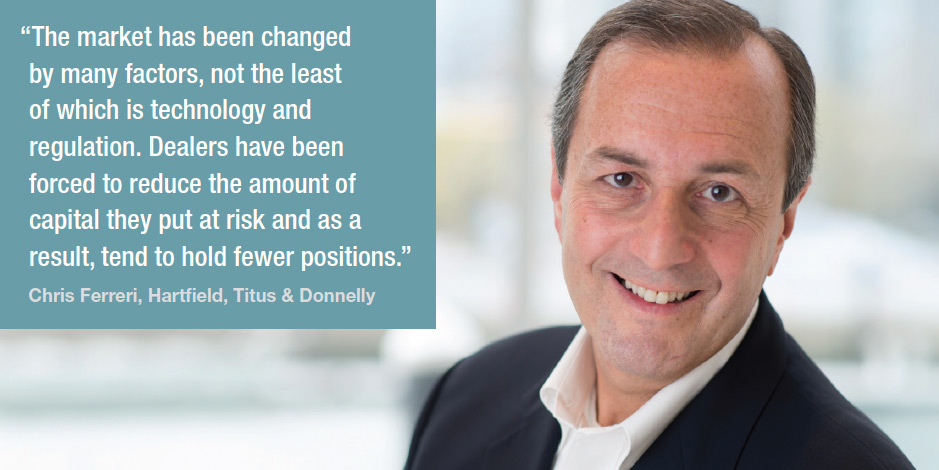 “One can argue that much of the trading activity in years past could be attributed to [activity that facilitated] price discovery,” says Chris Ferreri, chief operating officer at interdealer broker Hartfield, Titus and Donnelly. “The market has been changed by many factors, not the least of which is technology and regulation. Dealers have been forced to reduce the amount of capital they put at risk and as a result, tend to hold fewer positions.”

The market has particularly unique features which affect how trading takes place. It is heavily retail-oriented, with investors drawn by the tax-exempt status for some muni bond investments, which make them particularly attractive when set against other potential investments. There are nearly one million unique CUSIPs available with around 36,000 different issuers. Despite being a market with only domestic issuers, there is an absence of domestic market infrastructure which might help to centralise record keeping and trade data.

From an institutional trading perspective, several features in the market are absent, such as the ability to short municipal bonds and the absence of support from structured products. Although futures were previously traded via the CME, based upon an index provided by trade newspaper The Bond Buyer. These contracts were dropped in 2004 as sentiment turned against them and volumes petered out.

“The derivatives market in munis isn’t very well developed, so while a credit manager might have credit default swaps or total return swaps, the muni manager has fewer options available, and as a result we are seeing more interest in the use of exchange traded funds (ETFs),” says Schenone.

However, the market is also proving resilient in and of itself, by evolving solutions to these issues without regulatory intervention.

When the FIMSAC Transparency Subcommittee held a call in March which discussed whether a potential pilot study on the impact of transparency rules on block trading in the municipal securities market would be worthwhile and how such a pilot study might be designed, it determined that there was not a consensus view that a block trading pilot study would be worthwhile, based upon feedback from municipal securities market participants. By contrast a similar pilot has begun in the credit markets.

Washing its own face

Commercially driven market infrastructure is providing both transparency and increased liquidity. Trading platform operator MarketAxess launched electronic trading for muni bonds in April 2016 when it saw US$346 million traded on its system. By Q2 2018 that had risen to US$1.24 billion.

“There are definitely challenges in finding the right bid size and offer size, then putting that in competition with the same type of bond, or the exact CUSIP; what we try to do is break down the siloes to increase the number of bids in response to ‘bid wanted’ requests,” says Hardy Manges, head of municipal sales at MarketAxess. “We pull together a combination of the quoted side of the market and ‘bids wanted’ to pull together liquidity.”

Ferreri is quick to point out that pre-trade data in municipals is readily available from US$100 a month which potentially helps the institutional and retail markets, along with a single point of access to interdealer brokers for sell-side firms.

“Unique to the fixed income market in the US, MuniBrokers brings together 15 competing interdealer brokers onto a single platform with a single login,” he says. “Institutional traders in munis can access the markets operated by 15 brokers at once and benefit from the broad network of broking professionals across the country. In addition, ten Broker’s Brokers have formed Municipal Bond Information Systems (MBIS), to aggregate and distribute municipal market data at a very competitive price point.”

Where smaller fund managers find getting muni bond flow more challenging, they are increasingly using ETFs as a source of liquidity notes Schenone.

“Fixed income institutional investors are using muni ETFs such as MUB when they cannot find paper themselves, often using the ETF as a placeholder,” she says.

Plans are afoot to launch a muni bond future based upon an index which is being established by MBIS and R.J. O’Brien. The futures contract is under diligence review by exchanges, and the hope is for a launch later in 2018 or Q1 2019. The old contract failed due its liquidity drying up, argues Ron Valinoti, principal at Triangle Park Capital Markets and manager of MBIS.

“The market stopped utilising it as it became clear the contract and its fair value calculations could be manipulated by some market participants,” he says. “Its failing was having too few underlying constituent bonds in the benchmark index, and priced using valuation estimates rather than bona fide market quotes we rely upon. That has been addressed in our approach. We have also worked hard to ensure that when launched, there will be several market makers to provide the required liquidity in all market conditions.”

He says the new contract has about ten contracted clients and has produced results that correlate with other trusted proxies for municipal market activity.

“Our value is that our approach delivers full transparency, is designed so that the index and any derivative product we develop will not be subject to potential manipulation, and is produced throughout each trading day,” he adds.

Looking ahead, Manges believes that the market will carry similar innovations to other fixed income markets, it will just take time.

“Similar aspects that have come together in credit will come together in the muni market,” he says. “Investors want transaction cost analysis, the liquidity from Open Trading all on one screen, so anything we can do to bring light to the market will be in demand.”