The buy-side’s wish-list for execution and order management systems revealed in The DESK’s latest research.

This is the conclusion of The DESK’s latest research into buy-side fixed income trading, which asked the trading desks at 30 major asset managers how their existing OMSs and EMSs currently functioned, what they did well and where they needed improvement.

All respondents had an OMS of some description, with ten commercially available systems noted, and several firms using inhouse technology. Charles River Development (CRD) had the largest user base, followed by Simcorp and then BlackRock Aladdin and Bloomberg in joint third place (Fig 1).

The diversity of providers noted was interesting, as was the use of more than one OMS by five firms. Simcorp and Bloomberg OMS users were most likely to have their OMS platform functioning as an EMS within a single system, rather than operating two platforms.

In the EMS space Bloomberg was the prevalent platform being used, followed by Factset. Far fewer (54%) trading desks reported having an EMS for fixed income than those which used an OMS, even when including a combined O/EMS and internally developed tools as well as third party systems.

However, the pipeline for new business was greater amongst EMS providers than it was for OMS developers. In part this is likely to reflect the maturity of the OMS market which has seen big players take a good percentage of the market. OMSs primarily focus on internal processes and these have been simpler to support than execution management which is highly variable between firms and between fixed income instruments, therefore harder to model and standardise by third party providers.

Within the OMS market, firms planning to use an OMS (Fig 2) which they do not already have are largely looking at Charles River and also Aladdin. Many firms (87%) expressed no intention to use a new OMS.

In the EMS space both Charles River and FlexTrade had a pipeline of 13% of firms reporting plans to onboard them – in Charles River’s case including several Charles River OMS users expanding to the firm’s EMS tool. Other firms included were Adroit, TORA and newcomer Wave Labs.

When looking at the other asset classes for which OMSs and EMSs are used (Fig 3), the third party providers most commonly used in the fixed income space are also likely to be used for other instruments. One exception here is BlackRock Aladdin in the equity space, the one market in which it falls down the scale compared to FX and futures.

Most firms using both an EMS and OMS use application programming interfaces to link the two (Fig 4), while 44% do not use an integrator because they are a single system, or because an EMS is not used, or because they do not integrate.

Amongst respondents a small number are currently using desktop integration software to link an OMS and EMS, although OMS providers report they are working with third party system providers to use these tools more effectively.

Bond markets are unusual in that there is a gap between the internal buy-side technology and connection to the trading venues which provide different ways to trade. For example, orders that have been set up in an OMS then need to be re-staged into a trading venue. Connectivity between the venues and the platforms is improving but this is still a barrier to more efficient trading.

Many traders report a preference for a workflow that allows orders to be staged within an OMS and then managed into the market via the EMS functionality, without needing to worry about the venue being used. This would require smooth connectivity between the internal systems and the venues/counterparties as well.

What the tools can do today

When we separate out the functions that are covered by OMS and EMS providers (Fig 5 & 6), the split is largely what might be expected. The EMSs deliver a far greater level of pre-trade analytics than OMSs, while order and position tracking and routing, both internally and externally, are more commonly handled by an OMS. Interestingly the connectivity to multilateral venues is more commonly handled by OMSs, yet most execution functions are handled by the EMS. 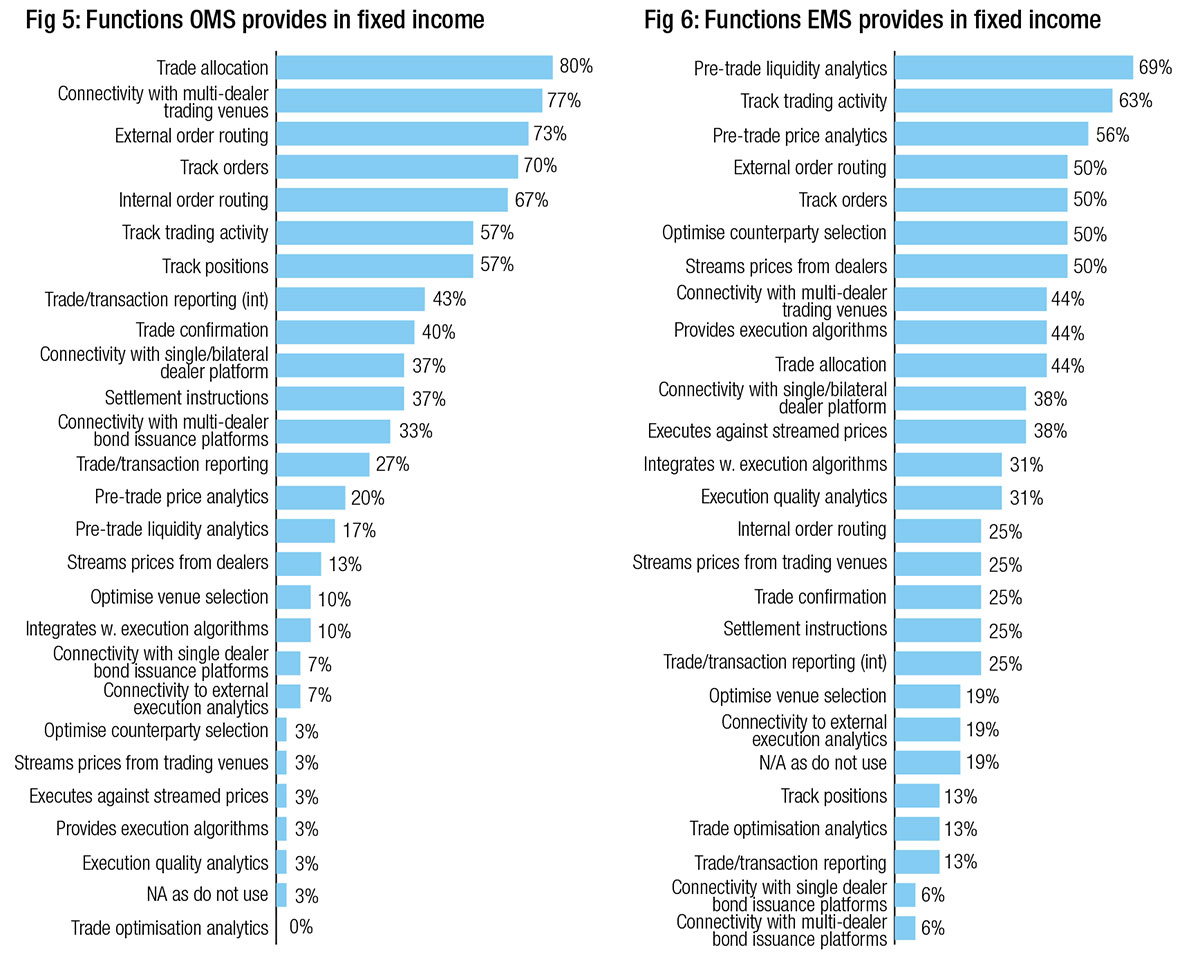 The main areas of new functionality that EMSs bring are in pre-trade activity, external trade and order tracking, but also counterparty selection, execution algorithms and streaming prices from dealers.

However, the level of effectiveness that these tools deliver does not always match their potential. If we look at respondents who are only using an OMS (Fig 7), we see six primary functions at which users report they are effective: tracking orders; multilateral venue connectivity; internal order routing; position tracking; external order routing; and tracking trading activity. They are also seen as being more effective than ineffective at trade allocation, confirmation and regulatory trade reporting. They are mainly considered ineffective at pre-trade analytics, execution quality and counterparty analysis and integrating streaming prices.

When we looked at the effectiveness for these functions at firms that used an EMS in addition to an OMS (Fig 8), the picture was quite different. 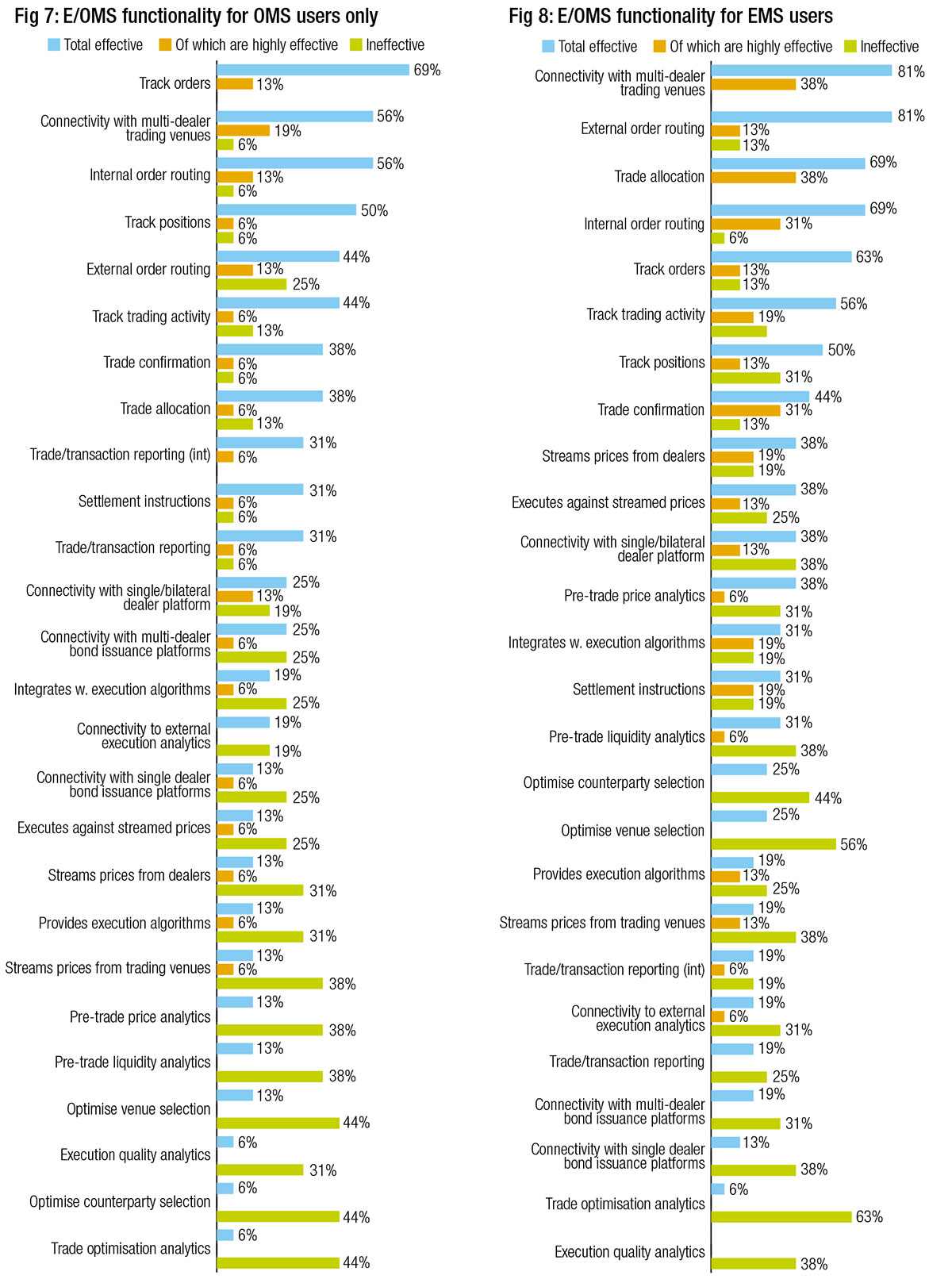 Firstly, the level of effectiveness for connectivity with multilateral venues, and external and internal order routing and tracking was higher, suggesting the addition of an EMS has a clear net positive effect on execution management. We also found that accessing streamed prices was more effective than ineffective for these firms. Around a third of respondents found their combined E/OMS was now effective at providing pre-trade analytics and a quarter were able to use their tools effectively for optimising venue and counterparty selection. That is twice as many OMS only users for venue selection and four times higher for counterparty selection.

Nevertheless, even where we saw an EMS added, we still saw underperformance in analytical capabilities including execution quality analysis and pre-trade tools. 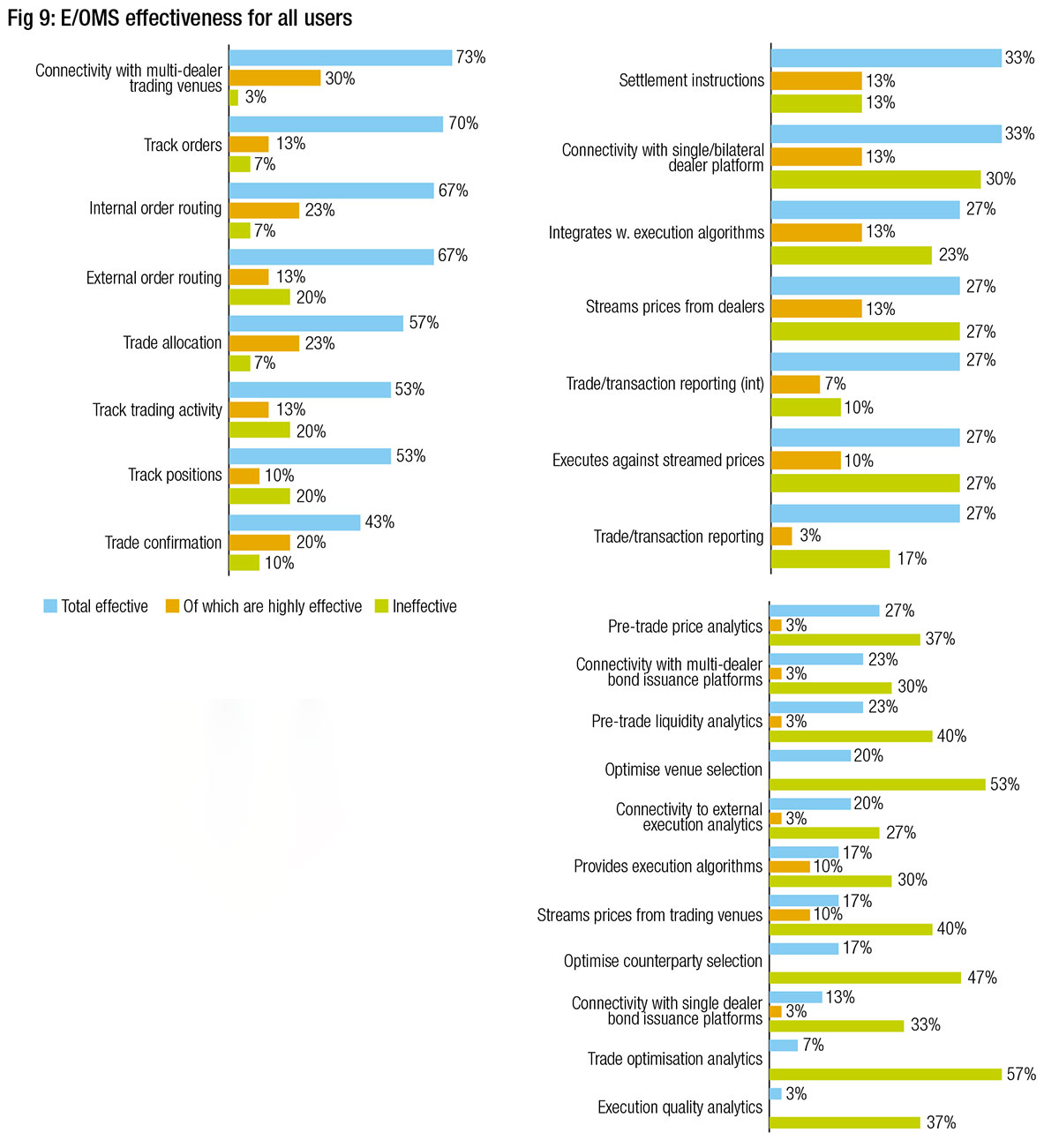 Looking at all respondents (Fig 9), the industry is finding its front office tech most effective at order and trade management, plus venue connectivity, with more mixed results for post-trade reporting, settlement and streaming prices, and poor results for analytics of most kinds.

The improvements that traders want (Fig 10) are in line with the gaps in performance that they currently see, based upon specific functions being added. When we asked traders to prioritise improvements, they rated data aggregation as the first point, followed by pre-trade analytics and customisation of workflow. 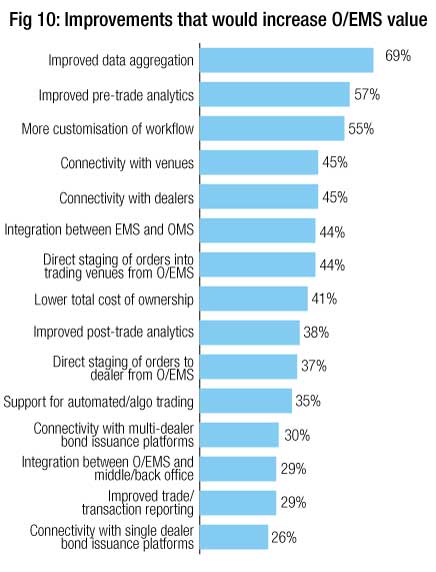 Despite the effectiveness of current connectivity, nearly half of traders saw venue and dealer connectivity as a major priority.

Integration was also key, between the EMS/OMS and also to the point of execution, with 44% of traders asking for the ability to stage orders directly into venues.

Given the relatively high level of prioritisation for these options, with 26% being the lowest (for connectivity to bond issuance tools), there are clearly many changes that traders want to see in the support being offered by their OMS and EMS providers. 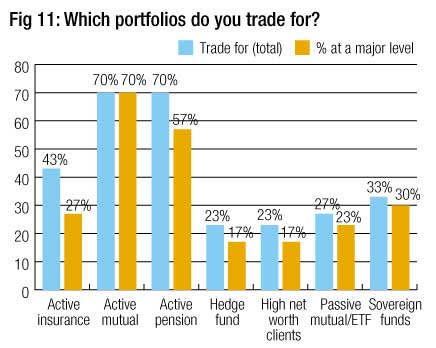 The majority of respondents’ trading activity is for real money, long-only portfolios (Fig 11), with a good proportion also trading for hedge fund, passive and high net worth funds. The majority trade investment grade bonds in Europe, Middle East and Africa (EMEA) or the US, followed by European high yield and emerging markets, and US rates and high yield.

For the purposes of the research, the demographic is a solid representation of traditional active asset management firms. 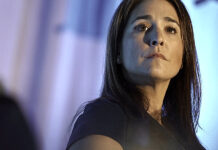