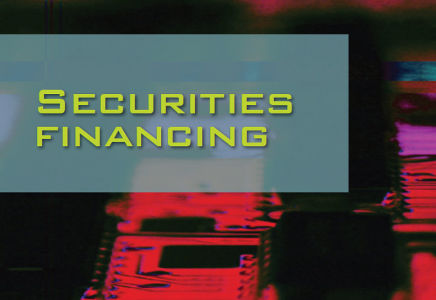 Securities lending comes into its own

How buy-side firms are adapting to the margin regime, by Lynn Strongin Dodds.

Regulation, including tighter margin legislation, has focused the buy-side mind on greater efficiencies in securities lending and repo, but it has not been the only catalyst. For the past decade stubbornly low interest rates, widespread quantitative easing (QE) programmes and technological innovation have played their part. Combined they have forced firms to look more carefully at their collateral management frameworks not only to reduce costs but also to wring out extra basis points.

Although the new margin rules for cleared and uncleared derivatives trading across the US, Europe and parts of Asia Pacific are a game changer, their impact has been somewhat muted due to the gradual and phased-in implementation. For example, under the European Market Infrastructure Regulation (EMIR), variation margin (VM) requirements went live last March for all counterparties – dealers, hedge funds, insurance companies or pension funds – although those that couldn’t cross the finishing line in time had a reprieve until September 2017. Initial margin (IM) requirements kicked off with the largest players in 2016 but will not be fully adopted by all market participants until 1st September 2020. 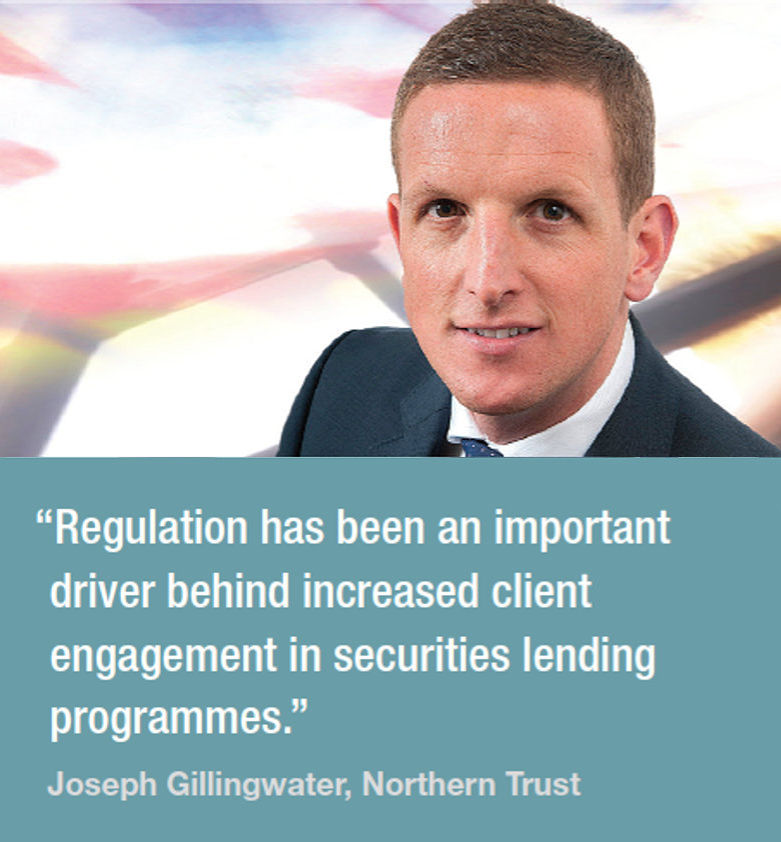 “Regulation has been an important driver behind increased client engagement in securities lending programmes,” says Joseph Gillingwater, head of international fixed income securities lending at Northern Trust. “The transition of the activity from the back office to a front office function has supported efforts to ensure asset owners are managing margin requirements efficiently. This has led to a wider conversation of how clients can extract the maximum value out of their programmes in this low interest rate environment, optimising the whole portfolio and not just specific assets.”

Bill Kelly, global head of agency securities finance at BNY Mellon adds that in the current climate, buy-side firms are looking “for opportunities to generate alpha in a prudent fashion, balancing the opportunity versus the risk. In the passive space, they have embraced securities lending whereas active managers have been more selective. However, this is changing because now active managers can see the benefits of securities lending from a competitive standpoint, and they can see its value in an effort to reduce unit ownership cost for their investors.” 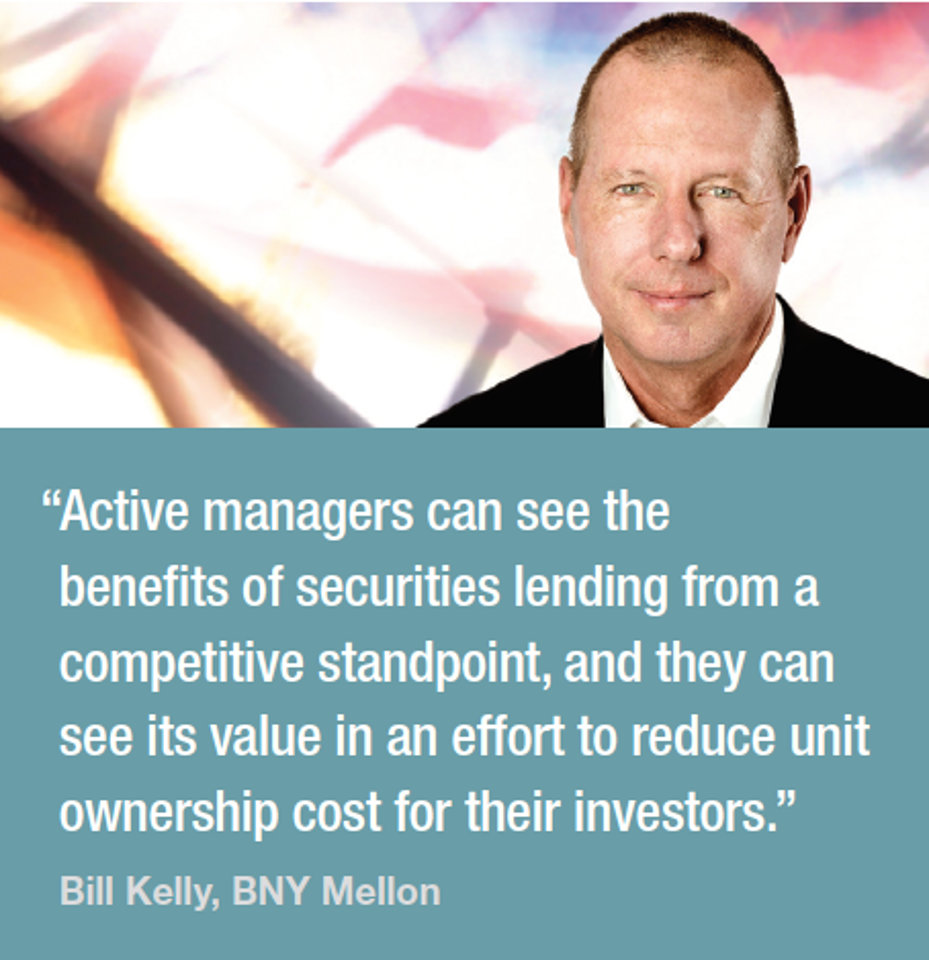 Citing IHS Markit figures, Jen Grenside, managing director, international head of equity FRM at Citi says that with a continued industry-wide focus on balance sheet and capital usage, securities lending has been increasingly used for optimisation of resources to create opportunities and improve returns with revenues increasing from US$1.5 billion in the third quarter 2008 to US$2.6 billion in the second quarter of this year.

To date, sourcing collateral has been relatively easy, although a squeeze is on the horizon. More market participants are going to be caught under the margin net, and will have to hold or find larger quantities of cash or high-quality liquidity assets (HQLA) collateral for VM and IM to support cleared and uncleared derivatives activity. In addition, the ensuing rise in the volume and frequency of margin calls is expected to causes spikes in collateral movements in order to meet more demanding settlement cut-offs for both centrally cleared and bilateral counterparties. Estimates of the increase range from five to 20 times for a typical buy-side organisation, which at the higher end significantly raises the operational burden.

Equally as relevant is the competition from investment banks, as well as the European Central Banks, who are hoovering HQLA out of the system for their respective Basel III capital requirements and QE agenda.

It is difficult though to predict the actual collateral shortfall that could materialise, but all agree that the chasm will not be the US$10 trillion predicted four to five years ago. Kelly believes it is more likely to be in the US$2 trillion to US$6 trillion range. Whatever the figure though, some industry followers believe that fund managers will need to up their game.

“The buy side is beginning to mobilise and look at their different options and are becoming more flexible in terms of the types of collateral they are willing to take,” Kelly adds. “In the past in the US, there was an equal split between cash and non-cash but today that figure is 70% non-cash and 30% cash, and the trajectory seems it will continue in this direction.” 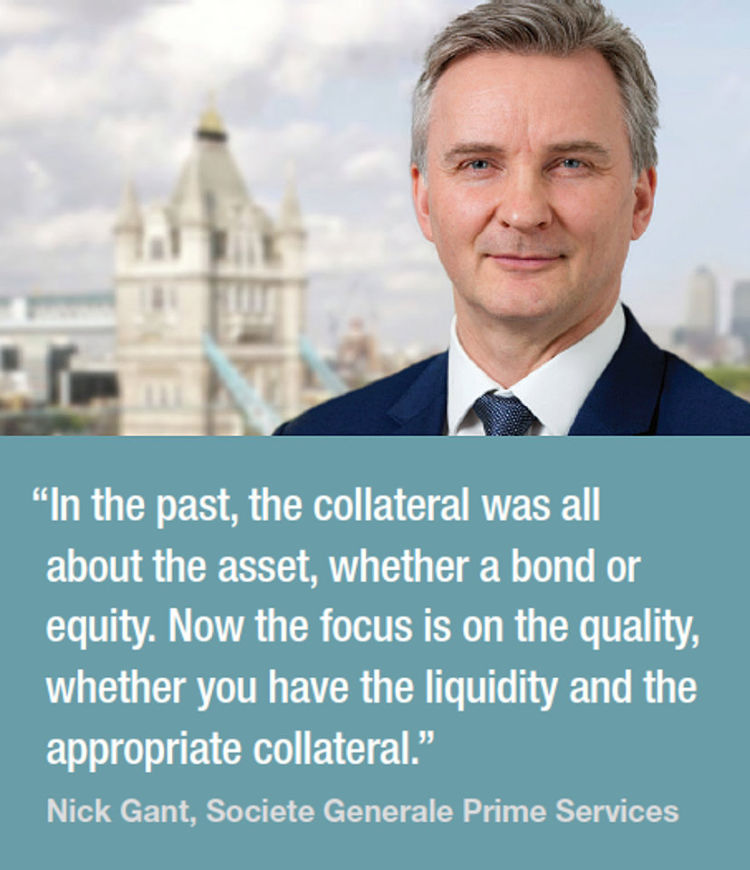 Nick Gant, director of prime services at Fixed Income Prime Brokerage for EMEA and APAC at Societe Generale Prime Services says, “They can manage for now and there is enough liquidity on a day-to-day basis but the problems could occur at monthly, quarterly and year end. If you do not fix the roof when the sun is shining then you will have problems when it rains.”

He adds, “In the past, the collateral was all about the asset, whether a bond or equity. Now the focus is on the quality, whether you have the liquidity and the appropriate collateral. We have seen more collateral upgrades and the merging of different asset classes to increase efficiency.”

Grenside also believes that improving returns post margin requirement regulation will depend on how funds were previously utilising their long inventory. “We have seen buy-side firms successfully maximise returns by having a strong understanding of securities lending and regulatory change,” she says. “As the industry gets more comfortable using equities as collateral instead of highly liquid assets this may have a positive impact on fund performance by allowing them to invest their cash & highly liquid assets elsewhere instead of trapped in a margin requirement.”

Buy-side firms are also adopting a broader view in terms of how and with whom they conduct business. Over the past couple of years, they have expanded the number of non-dealer counterparties as their traditional partners – the banks – have withdrawn, as well as explored peer-to-peer lending platforms and sponsored repo models. The latter though is not an entirely new phenomenon as DTCC’s Sponsored DVP Repo Service has been in existence since 2005. Last summer it was extended beyond registered investment companies to buy-side participants to enable them to become direct members or be sponsored by a member bank.

“We implemented the change to our model in response to growing demand from buy-side firms to have improved access to liquidity and risk mitigation tools,” says Laura Klimpel, executive director of DTCC’s clearing agency service. “Buy-side firms wanted to ensure that they can place their securities or cash and find the requisite liquidity. The cleared trade is also becoming more valuable versus the bi-lateral one as it enables clearing members to benefit from banks’ balance sheet and lower risk-weighted asset constraints.” 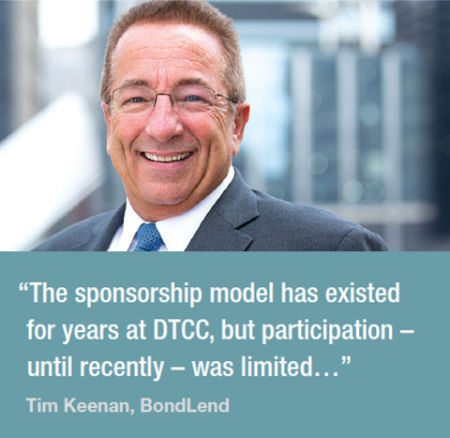 Tim Keenan, director, global fixed income strategist, BondLend, also notes that “the sponsorship model has existed for years at DTCC, but participation – until recently – was limited. With renewed focus on DTCC’s products, we now see new sponsors stepping up, as well principal buy-side players stepping in. This will make for a better market all around as we take this into the future.”

LCH followed suit in the autumn and opened its own repo clearing platform to buy-side firms through a new sponsored access model. It not only aims to enhance operational and market execution but also create opportunities for greater interbank balance sheet netting and enhanced overall repo market capacity, according to Paul Elkins, head of Product Development, RepoClear & Equityclear at LCH. While it is still too early to determine the success of these sponsored models, they have accelerated a trend that, like with the incoming margin rules, was already occurring.

“There has always been a dialogue between the portfolio manager and securities trading desk but there is now a much more integrated approach because of the revenue that can be generated,” says Gant. “It has been a natural evolution.”

Grenside adds that in many instances, buy-side firms are making the decision to transfer securities lending functions from operations into front office trading groups. “Bringing the trading and securities financing/collateral optimisation functions together allows firms to be proactive and capture more revenue opportunities versus a bifurcated organisational structure,” she says.