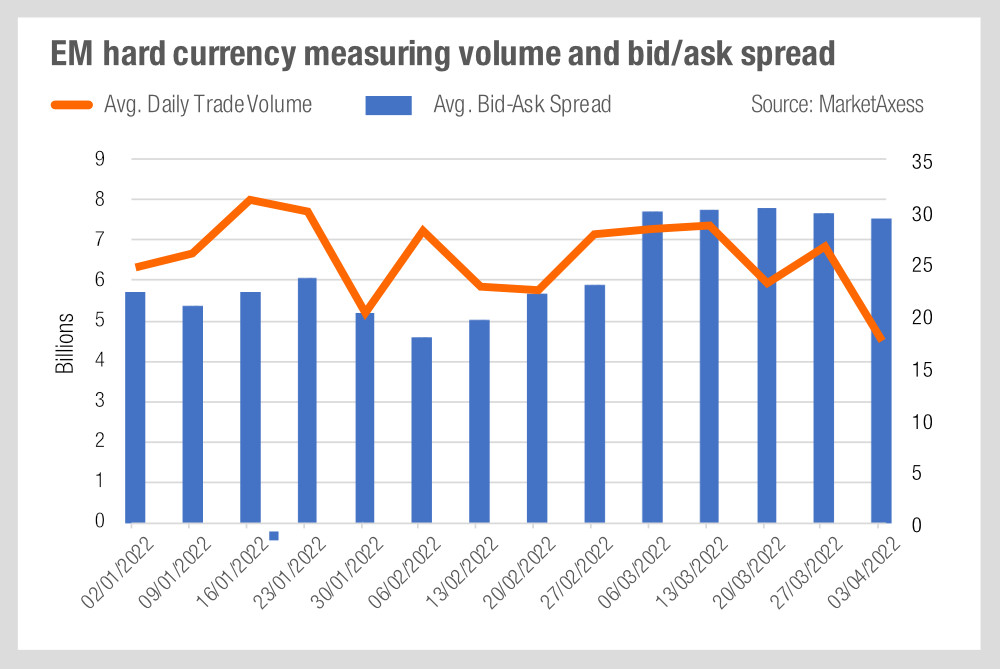 A very graphic representation of the cost of liquidity can be seen in the latest data from MarketAxess. It shows that average daily volume for hard currency EM bonds has declined since January, despite an uptick at the end of February as Russia invaded Ukraine, with a considerable drop off at the end of March. At the same time, the bid-ask spread has risen, peaking three weeks after the invasion started.

It has plateaued around 30 basis points (bps), relatively uncorrelated to the volume. Taking the broad view across EM, this suggests that the cost of liquidity for emerging market funds has increased. However, it must also follow from our previous analysis [How the effects of war are spreading in Asia – The DESK – Fixed Income Trading (fi-desk.com)] most of Asia has been relatively unaffected by the Russian invasion, while central and eastern European countries began to suffer as a result of closer trade and geographical associations more early on in the conflict. So, while the distribution of spread increases will be skewed towards bonds in particular countries and for countries with greater exposure to the risks incurred by war, sanctions and trade flows, it is fair to say investment managers handling EM funds are likely to have found their trading teams to have been more stretched in the past month. In circumstances which have tested the most well-prepared investment trading teams, many will now need to review their resourcing. The efficiency of trading will have been sorely tried, and several elements are likely to be considered looking forward. The first will be relationships. In a risk-off environment, having trusted counterparties who can use their balance sheet to trade on risk is key. Secondly, they must consider how data and trading systems can be brought together to enhance pre-trade transparency and the choice of trading execution protocol. Third, there will be opportunities with non-traditional counterparties – other buy-side firms and electronic liquidity providers – typically accessible via platforms which will potentially enable trades to complete when dealers are unable to fill them. In circumstances driven by a tragic human event, decisions driven by moral or economic imperative can be hard to put into effect, given the speed and directions of change. While such circumstances are hopefully rare, protecting investors’ money in them is a real test of buy-side firms’ abilities and investment in their trading operations. ©Markets Media Europe, 2022 TOP OF PAGE
Share
Tweet
Share