In 2021, electronic credit trading has seen a close fought race between two giants, MarketAxess and Tradeweb. While both have slightly different profiles, through acquisition and product development both are increasingly in direct competition.

It should be noted that other platforms are in this race however, their peer Bloomberg’s status as a private firm means that it does not reveal its trading volumes and other contenders are not yet in the ball park of these three, in terms of size.

Yet the disclosures these two firms make give us a good snapshot of the fierce fight that is taking place in corporate bond trading today. 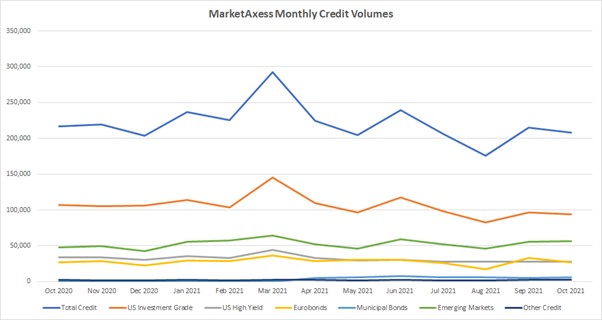 MarketAxess has had the higher average monthly volumes year to date, and saw higher volumes than Tradeweb in October which was the last reported month for them both, In recent months, Tradeweb has been closing the gap. 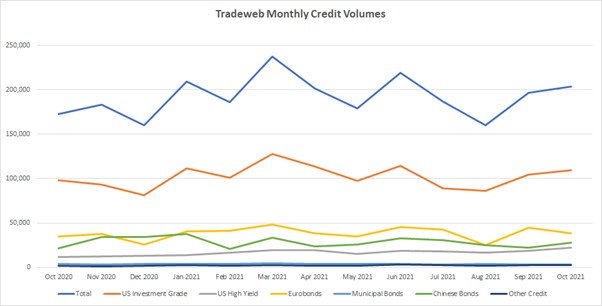 When we compare volumes for overall credit – including municipal bonds, EM and Chinese markets – we see that the gap in volume which existed in October 2020 of US$44 million reduced over the following 12 months to US$4 million in October. 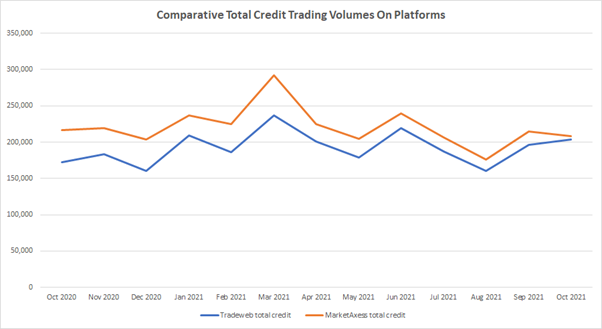 Breaking down the data further, we see that US investment grade credit has been the subject of a titanic struggle between the two firms over the past year. MarketAxess has been dominant by a fine margin but the Tradeweb has managed to fight back hard at year end. 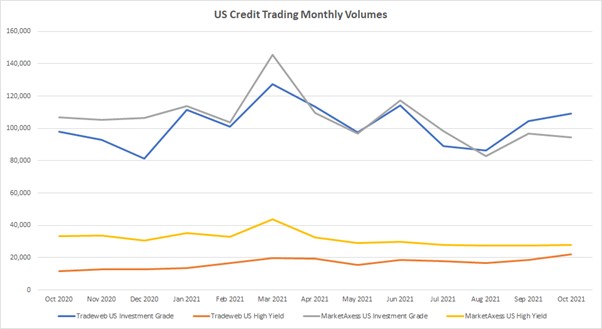 US high yield has not seen the same struggle – MarketAxess has been consistently ahead, albeit by a tighter margin towards the latter part of the year, while in European credit Tradeweb has consistently seen higher volumes over this period.

The DESK asked buy-side traders how they saw the battle between these two firms, and the majority mentioned that portfolio trading could be a big driver for Tradeweb’s recent growth. Equally, most said their engagement with MarketAxess was unchanged and cited its Open Trading all-to-all protocol as a big attraction when looking for liquidity. 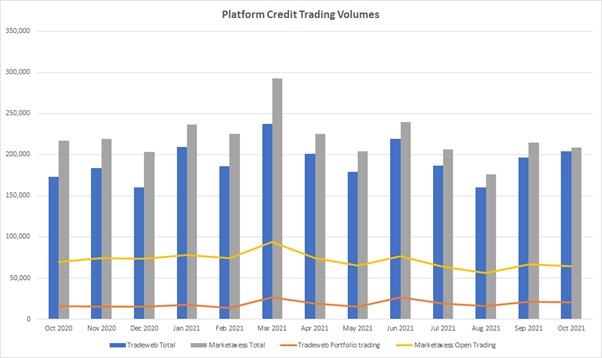 MarketAxess has seen a slight decline in Open Trading and Tradeweb has seen its Portfolio Trading volumes rise. Morgan Stanley analysts recently noted that portfolio trading has 4-5% market share industry-wide, and some industry participants think that can grow significantly to 15-20% of industry volumes over time.

They cited Billy Hult, president of Tradeweb who noted “portfolio trading can be an important growth driver to TW’s other credit protocols, as clients who engage with TW, perhaps for the first time, on portfolio trading tend to expand their relationships with the platform more broadly.”

However, at present neither of these alternative trading protocols’ reported volumes correlate directly with the ups and downs of their parents’ overall trading volumes.

The full year’s trading activity will not become apparent until 2022, when this competition will continue but clearly both firms have continued to support new ways of trading that have materially impacted the way firms execute and have created liquidity in the market.