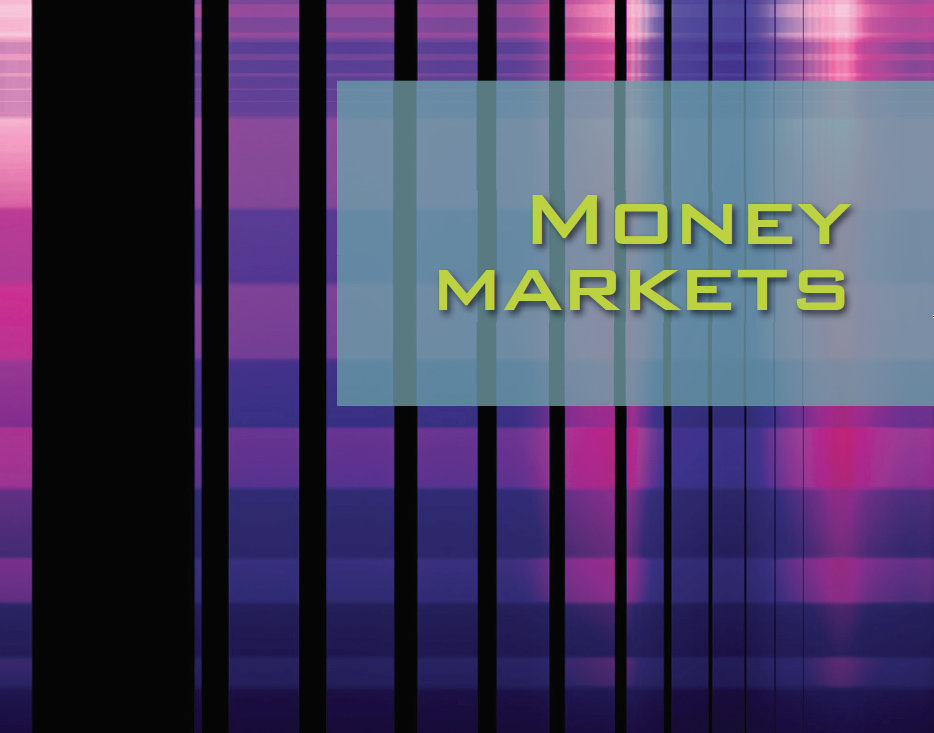 Banks have reacted to end-of-quarter capital reporting by reducing activity, leading to sudden declines in liquidity; now authorities are reacting.

Banks have been ‘window dressing’ their capital requirements in order to meet Basel III leverage ratio Pillar 3 disclosure requirements, which has hurt liquidity in the repo and money markets. The Bank of International Settlements (BIS), which is responsible for the Basel III capital adequacy rules, is currently deliberating as to what should be done.

In October 2018 the BIS’s Basel Committee reported that it had tracked increased volatility in money and derivatives markets at quarter end, which it noted indicating “potential regulatory arbitrage by banks”.

“A particular concern is ‘window-dressing’, in the form of temporary reductions of transaction volumes in key financial markets around reference dates resulting in the reporting and public disclosure of elevated leverage ratios,” the Committee said. “In this regard, the Committee published a newsletter in October 2018 in which it indicated that window-dressing by banks is unacceptable, as it undermines the intended policy objectives of the leverage ratio requirement and risks disrupting the operations of financial markets.”

Liquidity was already stressed in these markets due to the very limited inventory that banks carry in comparison with historical levels, which makes it harder for them to support buy-side clients.

Roelof van der Struik, investment manager at PGGM says, “Banks have nothing on their books anymore, they have to source it themselves and that sets the scene before we consider the effect of window dressing at a half-year or year-end.”

One buy-side head of trading reported that post-trade data analysis had also revealed a drop off in liquidity provision for cash bond markets over those periods.

What price safety?
The Basel III leverage ratio is a 3% minimum level that a bank has to meet, calculated by dividing its Tier 1 capital by the sum of the exposures of all of its assets and non-balance sheet items. The banks must report their leverage ratio on a quarter-end basis or, if their national competent authority agrees, report a measure based on an average of daily or month-end exposure levels.

It functions as a buffer against accumulated leverage in the banking sector, following the systemic risks that exposure to leverage created for banks in the 2007 financial crisis. While risk-based measures were also introduced under Basel III, the leverage ratio is a backstop to the risk of any miscalculation under those models by using a more straightforward measure.

In December 2018 the BIS issued a consultation paper, which proposed that banks ought to supplement existing disclosures with the reporting of average daily values (ADV) over each quarter for the adjusted gross securities financing transaction (SFT) assets, the replacement cost (RC) of derivative exposures; and any central bank reserves that are included in on-balance sheet exposures. 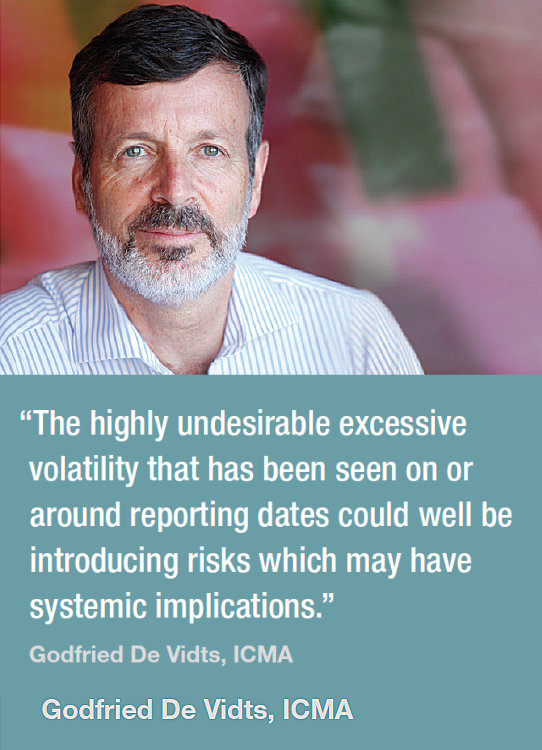 He observed that the ICMA ERCC believes that introducing the requirement would be positive, while the existing model “only serves to disguise risks that the market is running and the highly undesirable excessive volatility that has been seen on or around reporting dates could well be introducing risks which may have systemic implications.”

The point he makes is supported by van der Struik, who explains the sudden change in liquidity levels at year end creates a far greater challenge than revealing a daily shortfall, as the size of the shortfall at year end is more likely to hurt a firm significantly.

“I think it makes a lot of sense to review banks’ balances, based on reporting either daily or weekly as that would prevent any spikes at reporting periods, but I have read that banks think it would be too cumbersome to report on a daily basis,” he says. “The issue is, if things really go wrong at the end of the year to a large degree, then firms are really in trouble.” 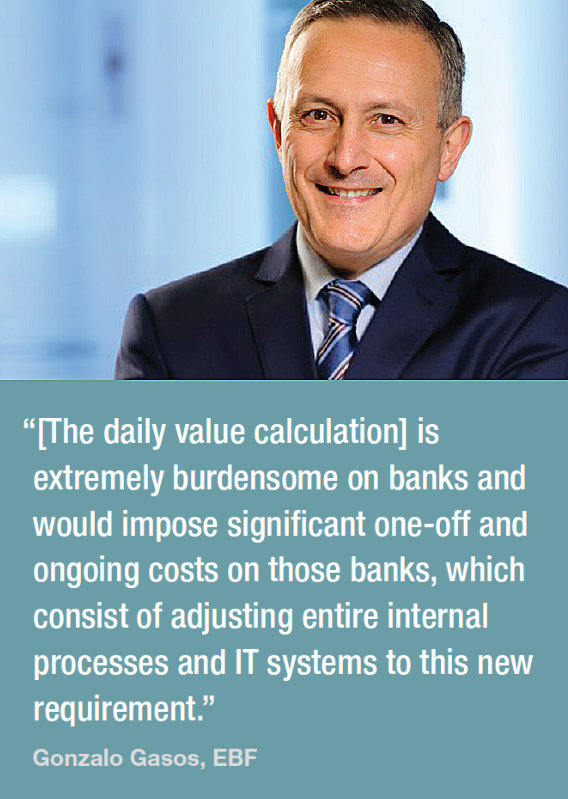 The concern regarding daily reporting was supported by Gonzalo Gasos, head of Banking Supervision at the European Banking Federation (EBF), who noted in the EBF’s response to the consultation that daily value calculation “is extremely burdensome on banks and would impose significant one-off and ongoing costs on those banks, which consist of adjusting entire internal processes and IT systems to this new requirement.”

He noted that daily values are not typically audited but would have to be to meet the standard of quarter end values, which are audited. He also warned that there would potentially be a discrepancy between the liquidity ratio and the leverage ratio’s capital metrics, which are calculated on a quarterly basis in Europe, creating confusion around a bank’s capital adequacy.

Darren Hannah, vice-president finance, risk & prudential policy at the Canadian Bankers Association (CBA) wrote that its members’ systems and infrastructures “are not setup to generate daily regulatory calculations of leverage exposures,” while Robert Arbuthnott, head of group finance at Credit Suisse, and Todd Runyan, the bank’s group accountant, largely commended the proposals but made the case for weekly values being used over daily, as that would lessen the operational burden upon banks significantly.

Cautious approach
Several respondents also asked for greater analysis of the potential impact. The ICMA ERCC argued for an impact assessment to examine the leverage ratio’s calibration as it pertains to repo and collateral markets.

“This is necessary in order to safeguard the provision of sufficient market capacity and repo availability, particularly when considering the future market environment with less accommodative monetary policy, thereby averting the risk that currently witnessed quarter-end dislocations become the norm,” De Vidts noted.

The CBA recommended that the BCBS offered a longer period of observation to assess changes in individual jurisdictions, after which national discretion be given to apply additional leverage ratio disclosure requirements in their jurisdiction.

Although the process has not been laid out publicly, a source close to the BIS said. “The comment period for the consultation has ended, and the Committee is currently considering comments received to inform its next steps.”

At the start of the consultation, Hortense Huez, director at consultancy PwC noted, “At the European level, the proposed changes are likely to find their way into the European Banking Authority (EBA) level 2 texts implementing the second Capital Requirements Regulation (CRR II). In the UK, the PRA already requires firms subject to the leverage ratio to calculate an average over a reporting quarter, based on daily on-balance sheet assets averaged over the quarter, as well as monthly off-balance sheet exposures averaged over the quarter. This new Basel proposal might increase supervisory focus on the issue.”

In March 2019, a final agreement was reached on Europe’s implementation of CRR II and the fifth Capital Requirements Directive (CRD 5), giving the EBA a mandate to assess the extent to which banks were window dressing.

In the meantime, buy-side traders have to cope with the current environment using a range of strategies. While one head of trading was able to leverage post-trade analytics to pressure banks into better liquidity provision in the cash markets, managing short term positions via repo and money markets can take some complex and counterintuitive engagement.

“One work-around to is manage cash positions down, so that they are negative, and you don’t have any cash, and then use the collateral you have from lending out the cash in order to borrow if needed,” says van der Struik. “It is a little counterintuitive; make sure you are liquid, you are poor and that you have collateral you can repo out.”