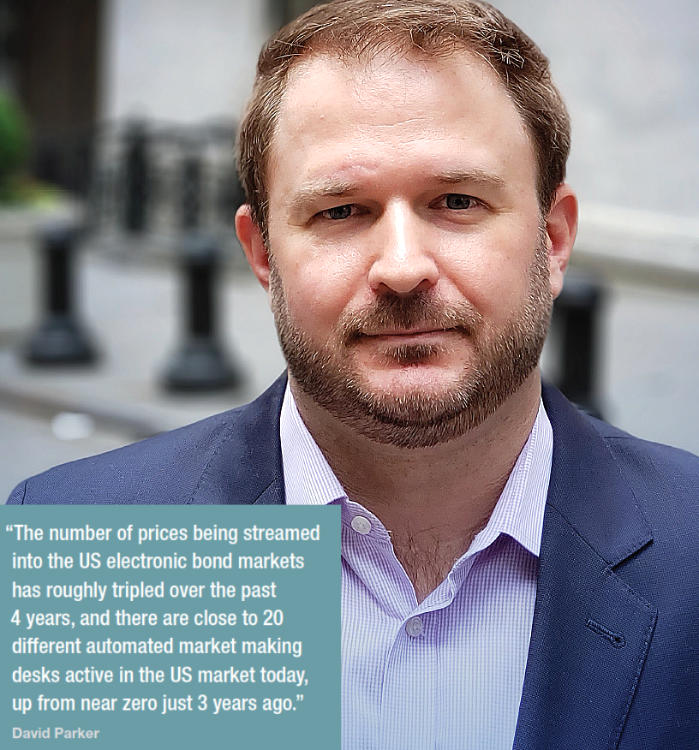 Technological advancements are quietly – and sometimes not so quietly – altering the fixed income trading landscape in the US and globally. Trading models that once relied solely on human interaction now contain a heavy electronic element or, in some cases, may run completely on technology. Recent Greenwich Associates data shows that over 90% of corporate bond market trades under US$100,000 are traded electronically. In the market at large, well over 30% of trades are now traded or processed electronically.

This electronic wave has brought a surge of data and automation to the marketplace. Based on MTS figures, the number of prices being streamed into the US electronic bond markets has roughly tripled over the past 4 years, and there are close to 20 different automated market making desks active in the US market today, up from near zero just 3 years ago.

These are amazing rates of change. They represent major shifts in how business is transacted and the market ecosystem functions, and change can be both empowering and scary. As is often the case, some of these technological advances push humans out of roles in which they were heretofore essential. Resistance to change can be strong, particularly in the corporate bond market which has maintained the status quo for a very long time.
On one level, we are experiencing the classic story of machine replacing man. Remember the old story about John Henry, a famously strong and efficient railroad labourer, battling the newly invented steam drill and winning? It shouldn’t be forgotten that Henry won the contest but soon after collapsed and died of exhaustion.

What if Henry had taken a different approach? What if he had adapted his game, worked with the steam tool and figured out how to harness its disruptive power to his advantage? The combination of the best of human power and complex knowledge with a tireless tool purpose-built to do one thing would have been just as worthy a story for the ages.
From where MMI sits in the middle of the fixed income trading ecosystem, we have seen many examples of traditional players sceptical of change and outside influence. One complicated manifestation of this viewpoint in our market is the recent SEC FIMSAC proposal to delay for 48 hours TRACE reporting for larger trades. While the value proposition is that the change will allow dealers time to offload risk by keeping traded prices obscured from the market, such a rule change would also have the effect of preventing any automated market making system from knowing where the market might be trading.

Fortunately, we have also seen many examples of established firms and individuals showing the agility and foresight to not only accept innovation but also turn it into a competitive advantage. Human beings don’t have to disappear in the new model, and they certainly don’t have to die (or lose jobs) fighting to prove they are superior to machines. Surviving – and thriving – in this environment requires an honest assessment of one’s position in the value chain and how modern tools can be leveraged to do more with less effort, or even to create entirely new businesses.

At Invesco Advisors – a manager of close to US$1 trillion in total assets, whose history dates back to the 1940s – recent changes in corporate bond market structure have coincided with significant growth in their allocation to that asset class. This forced their traders to quickly find ways to maximise their efficiency, collect more information and complete many more trades in less time while retaining high quality execution.
As Robert Simnick, Head of Invesco ETF Investment Grade Trading, says, “With the fragmentation that has historically defined the corporate bond market, recent advances in quote aggregation have allowed market participants to enhance price discovery and broaden liquidity access. For the buy-side of the market there is considerable power in data visibility, collection and comparison. Having the ability to compare the right data efficiently has helped to fundamentally change the nature of the corporate bond space and reduce fragmentation, even as the size of the space has grown from roughly 10,000 IG CUSIPS ten years ago to over 18,000 today.”

“We are now able to determine in real time where we are likely to find the best channels and counterparties for execution, including the expected costs of each option. That may mean picking up the phone, clicking-to-trade, doing an RFQ, or new innovations like a ‘portfolio trade’ with a single counterparty. Having central access to all the data and platforms allows a single trader to be significantly more efficient than they would otherwise be and serve our clients better by narrowing execution costs and improving best-execution processes.”

Brownstone Investment Group, a 20-year veteran of the fixed income space, made the bold decision last year to lean in and hire an experienced credit “algo” team to build and operate an automated bond market making platform from the ground-up. Jon Sablowsky, Head of Trading, says “Brownstone strongly believes technology should enhance, not replace, human instinct and relationships. Our proprietary technology platform enables our team to accurately value and trade thousands of securities in real-time. Sophisticated modelling and automation handle streams of ‘low-touch’ electronic trading opportunities, freeing our traders to focus on deeper ‘high-touch’ analysis and interactions.

Although always forward-looking, for a firm like Brownstone to double down with a significant investment in credit electronic trading is a good example of working with the changes – which is the mindset required to ensure success for the next 20 years.
Disruption is a fact of life, particularly when it comes to the financial markets, and technology is a huge accelerator for change. Why not use disruptive technologies while they are still new, to enhance your strengths and maximise growth and profit before everyone else figures it out and adopts the same tools? The alternative to embracing change, and disrupting your own model, is to have your model disrupted by others.