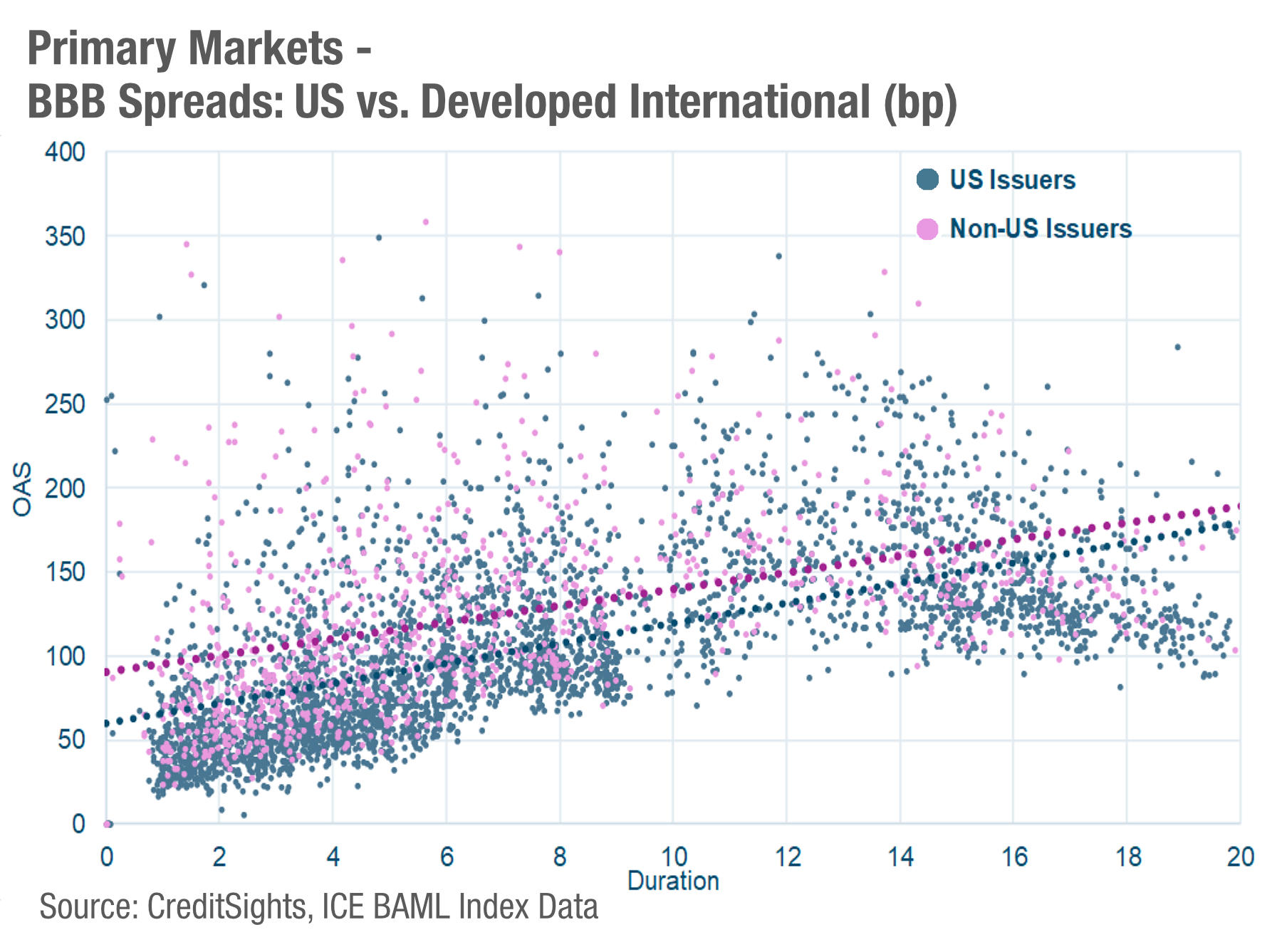 The lowest tier of investment grade bonds show an interesting opportunity in the new issue space, as observed by analyst firm CreditSights. Relative value trades can be a real opportunity for portfolio managers to find alpha which in the current market is often challenging without moving into emerging markets (EM) or other areas of fixed income with more perceived risk.

CreditSights has shown that by moving geography, but keeping the same credit ratings and industries, investment managers can potentially pick up greater yield.

As can be seen in this week’s chart, in the BBB space – which now accounts for over half of bonds in the US according to analysts – there is a 20 basis point pick up for trading non-US bonds against US bonds, which increases to 30 bps in certain sectors including banking, basic industry, consumer goods and retail. The average size of the US issue was on average smaller than that of the international issuers.

BBB-rated debt has seen trading volumes grow 26% year-over-year to reach US$308.4 billion in February 2021, according to research from MarketAxess. This debt now makes up 37% of TRACE, up from 32% in February 2020. At the same time, bid-ask spreads of debt widened higher than any other rating bucket at 8.73bps, but recovered more quickly than high yield bonds – dropping back to pre-crisis levels within a year. It estimates total outstanding debt in the BBB-rated bucket went from US$3.7 trillion to US$4.9 trillion, with the largest issues in the bucket including Pemex, AT&T, T-Mobile, and AbbVie.

For a relative value trade to work the PM has to be able to accept bonds as substitutes for those in the portfolio and so their mandate would need to allow the fund to hold fixed income from US or non-US issuers for this to work. In its analysis, CreditSights removed any EM bonds from the equation, making the data set more apples-to-apples, and had 944 non-US bonds in its universe of 4527 in the ICE BAML set.

Not only does a PM need the right mandate to consider relative value between geographies but often they will need their trading teams to be capturing primary market data and reviewing their own engagement with issuers over the year in order to spot the opportunities. Based only on trades that a desk engaged in, this trend would be harder to spot, even more so if trading desks were split between US and international.

This is a good example of balancing the right data to get a bigger picture of the market, to benefit investors.