Lynn Strongin Dodds looks at the US repo market and how it is staying liquid.

Views are divided over the health of the US$2.2 trillion a day repurchase agreement (repo) market, with some industry participants seeing this year’s bountiful US Treasury bill crop putting a damper on growth while others believe the comeback journey is progressing due to regulatory reforms and the increased participation of non-bank institutions.

All agree though that the market has been inundated with Treasury debt on the back of skyrocketing financing costs. Not only is the Federal Reserve unwinding its balance sheet but the Trump Administration’s tax reform and a ballooning deficit is increasing the need for government funding. The deficit totalled US$779 billion through the first nine months of the fiscal year ending 30 September compared with US$523 billion for the same period a year earlier. This represents the largest budget gap since 2012 and analysts predict the chasm will reach the US$1.4 trillion mark by the end of 2018 which equates to a debt-to-GDP ratio of close to 80%.

“We are in the middle of a structural market change: we are no longer in a quantitative easing but in a tightening environment” says James Slater, head of securities finance and global collateral services at BNY Mellon. “The issuance from Treasury is significant – bills, bonds everything. It is a structural change that is most likely with us for years to come.”

The tapering began last October with US$10 million a month of maturing securities and by October 2018 the figure will hit the peak level of US$50 billion a month not being reinvested. In total, almost US$350 billion of liquidity will have been withdrawn from the market by year end.

It is not surprising then that the Treasury is coming cap in hand to the debt markets although this magnitude of borrowing has not been seen since 2008. The issuance tally from July through September was approximately US$329 billion – up $56 billion from the agency’s April estimate – while October through December is expected to see around $440 billion coming through the pipeline. The swell is forecast to continue with the Treasury’s Borrowing Advisory Committee, comprising representatives from investment funds and banks, stating that the size of monthly debt auctions would need to continue ratcheting higher to fund the government’s deficits in coming years.

The bulk of issuance has been in the short dated 1, 3- and 6-month Treasury bills which have been at record sizes. The debut of the 2 month T bill in October which will have its own auction timetable could help reduce upward pressure – due to growing supply – on existing T-bill yields by spreading auction sizes across more maturities. Moreover, it could enable the Treasury to manage its target duration more effectively and take advantage of lower funding costs associated with shorter-maturity T-bills.

While bond buyers welcome the new entrant, some in the repo space are worried that the glut of supply and a brand new bill is putting undue pressure on the market. Repo is a key source of short-term bank funding and is typically used by investors and companies as a way to invest spare cash. A repo involves one party selling assets, such as US Treasuries, in return for cash with a promise to repurchase the assets, usually the following day.

As one participant put it, “We often hear from Fed and Treasury officials about how liquid the Treasury market is but at US$14 trillion in outstanding US Treasury debt those of us who trade repo feel the market is pretty illiquid. We all understand that the Treasury debt market has been growing at a rapid pace, even before the tax cut that added a massive amount to the Treasury’s issuance. The slow maturing of the Fed’s QE portfolio is also adding to the pressure on the repo market.”

He notes that there is no discussion of the possible impact of the recent issuance of massive amounts of short-term Treasury bills and their effect on the repo markets.

“Clearly as T-bills are an alternative to repo with cash leaving the repo markets for high yielding short term Treasury bills,” he adds. “The Treasury even introduced a new two month T-bill which start trading in October. With the yield curve as flat as it is today with 2-year to 10-year at 0.20 bps why is the Treasury not issuing longer debt? The opportunity cost is so low for the Treasury to issue longer term debt but they seem to want to drown the market with short-term issuance.”

However, others believe that while the new supply could push up front-end rates, from repo to the London interbank offered rate (LIBOR), there is also a chance that the changes to the auction calendar will ease the tight funding conditions and higher rates typically seen around settlement days.

Slater says that in some cases T-Bills can be used as an alternative to repo, but it is a zero sum game in that you can buy the instruments outright or you can buy repo with Treasuries as collateral. “Investor participation in repo markets is strong, with large fund management complexes showing significant flow from their money funds into government repo.”

There have been a slew of initiatives wrought by tougher and more stringent legislation that have strengthened the repo market and injected liquidity.

“After the financial crisis, new capital rules moved repo onto bank balance sheets and what we saw in 2017 and 2018 was a greater emphasis around return on capital,” Slater adds. “Initially this put some pressure on repo rates as dealers looked to optimise their client flows. With capital constraints and increased Treasury issuance, we have seen some growth of smaller broker-dealers to step in and meet some of that financing demand, as well as electronic trading platforms and central clearing solutions seeing greater interest.”

For example, BNY Mellon launched cash and collateral marketplace DBVX, that allows firms to transact with banks as well as directly with non-traditional counterparties. It aims to provide a level playing field where all counterparties transact on the same terms, allowing them to supplement their existing relationships without having to negotiate bilateral contracts.

The Depository Trust & Clearing Corporation also made waves with its Fixed Income Clearing Corporation (FICC) unit’s new platform whereby the buyside provides collateral and liquidity to the repo market which has traditionally been represented by banks and broker-dealers. In the past firms including mutual fund companies and money market funds, have been only able to offer the cash side of a centrally cleared trade in the market. 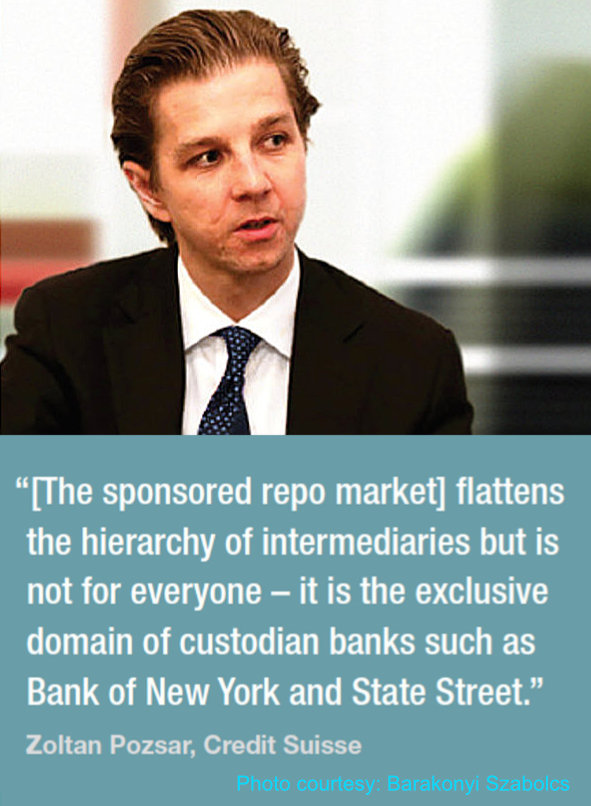 Alongside this trend and another pool of liquidity, has been the sponsored repo market which has grown significantly from zero to US$50 billion, according to Zoltan Pozsar, managing director and analyst at Credit Suisse.

“It flattens the hierarchy of intermediaries but is not for everyone – it is the exclusive domain of custodian banks such as Bank of New York and State Street,” Pozsar says. “It is a totally balance sheet neutral activity for custodians – a rarity under Basel III. It enables ‘well capitalised bank-members’ of the FICC to sponsor in both cash lenders and cash borrowers to become FICC netting members. Cash lenders include money funds and cash borrowers include all stripes of fixed income and hedge funds.”

“We are seeing a broadening of the counterparties,” says Pia McCusker, global head of cash management for State Street Global Advisors. “We are seeing a number of smaller liquidity providers looking to use platforms such as FICC which had previously received collateral from their primary dealers.”