The pipeline of growth is returning after MiFID II, with reliance on specific platforms increasing.

In 2017 the appetite for onboarding new platforms plummeted, not least as a side-effect of the operational stress that MiFID II placed upon buy-side firms.

We have seen that appetite return somewhat in 2018 (see Fig 1). There are several drivers for future growth. 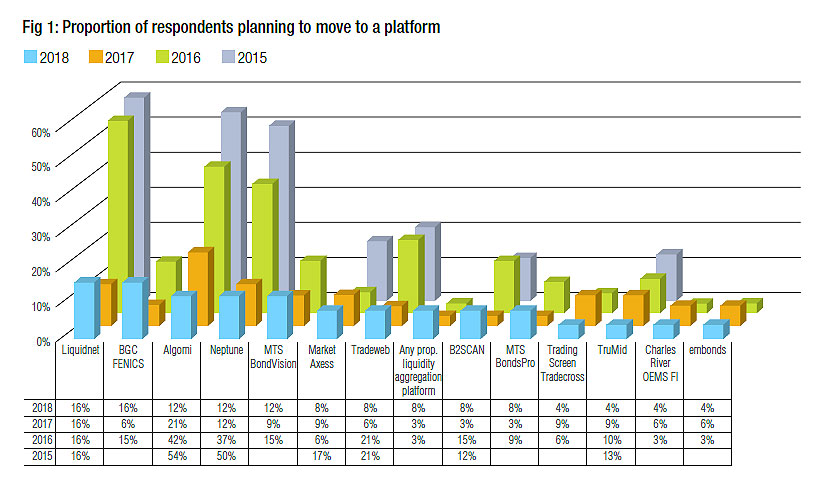 A secular trend has been MiFID II, encouraging electronic trading in the European markets both for low-touch orders and process trades. A more cyclical trend is the recent growth in volatility on both sides of the pond, which can push traders onto electronic platforms in fixed income. Amongst the platforms themselves, many have closed or consolidated (see article) reducing competition.

Of primary interest amongst execution platforms are operators with a twist. Block-trading specialist Liquidnet, data aggregators and the interdealer-broker-operated BGC Fenics both have strong pipelines for the year, with Algomi and Neptune leading the charge for data aggregators. MTS BondVision is also clearing the 10% mark for firms looking to onboard.

Liquidnet stands out for maintaining strength in its pipeline relative to other firms, whilst also having ‘user’ and ‘major user’ bases which are relatively high compared with the competition. BGC has a long and hotly anticipated offering in the pipes for launch this year.

If traders are reliant upon those platforms of which they are ‘major users’, while platforms on which they class themselves as ‘users’ are used more freely, we have seen traders becoming dependent upon certain platforms.

The big three – Bloomberg, MarketAxess and Tradeweb – have increased their value to users significantly over the last four years (see Fig 2), increasing their ‘major user’ base by 23%, 27% and 19% respectively. The number of respondents that are either users or major users of these platforms stands at 88%, 80% and 85%. 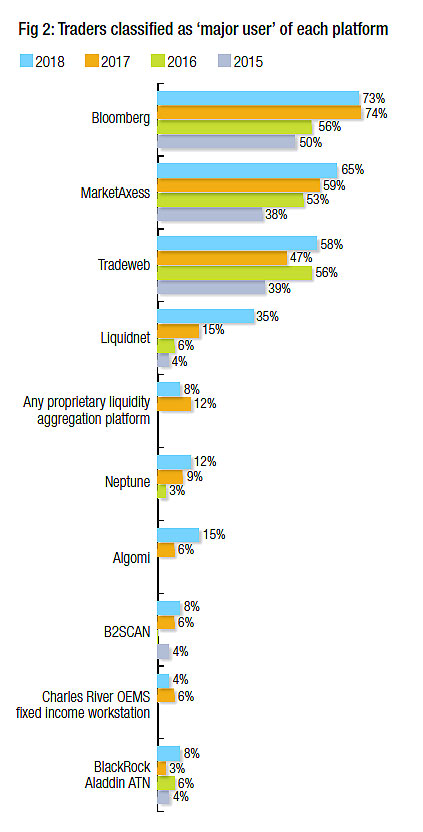 Of the new entrants – those systems that have become active in fixed income in the last five years – Liquidnet, Algomi and Neptune stand out, having grown their major user base by 31%, 15% and 12% within those five years.

For both Liquidnet and Algomi, this tallies with a corresponding drop-off in trading desks that consider themselves ‘users’ of the platforms by 25% and 28% (see Fig 3), suggesting that they are converting some of their existing user bases into ‘major users’ as those traders become regular users of the tools in their order management workflows, but are also losing some along the way.

The big three are also seeing a decline in ‘users’ as ‘major users’ increases, with the exception of Bloomberg, which saw a 1% fall in major users and an 11% fall in users. The lack of growth was predicted in last year’s survey which saw its pipeline of firms planning to come onboard at 0%, although 100% said they were already either users or major users. As a counterpoint, Bloomberg is still seen as the most effective platform for finding liquidity (see Fig 4).

Although MarketAxess and Tradeweb saw their number of major users increase, for MarketAxess that did not correspond with the decline in ‘users’, which fell by some 23% proportionately. Tradeweb on the other hand saw net growth of ‘users’ and ‘major users’ by three percentage points.

Two platforms with no substantial ‘major user’ base but a significant proportion of ‘users’ are UBS’s Bond Port and Trumid. Both deserve further discussion. Bond Port is almost the ‘last man standing’ in the bank platform space, operating as an order router rather than a trading venue. Its pipeline jumped up to 13% of respondents in 2016 and it has maintained popularity amongst users ever since, with its low cost being noted as a virtue. 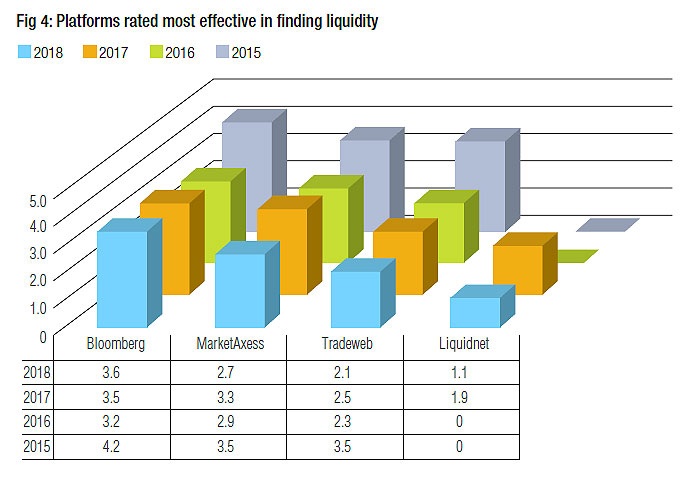 Trumid has fought tooth and nail for market share using its ‘Swarm’ order protocols, which are akin to spontaneous auctions designed to capture the sporadic and episodic liquidity events seen in the credit markets. Its use has increased significantly over the last year, and while it took over rival Electronifie in that period, there was already significant client crossover, so the growth appears to be organic.

As we look at the expectation for platform use over the next one, two and five years, confidence in a range of platforms is relatively high (see Figs 5, 6, 7). Setting aside the ‘big three’ who have a solid future, confidence in the use of Liquidnet is also proportionately high. MTS BondVision and Trumid both have the backing of more than 10% of traders over the short to medium term, whilst Neptune, Algomi and proprietary data aggregation tools have between 15-30% of traders behind them across the next five years. 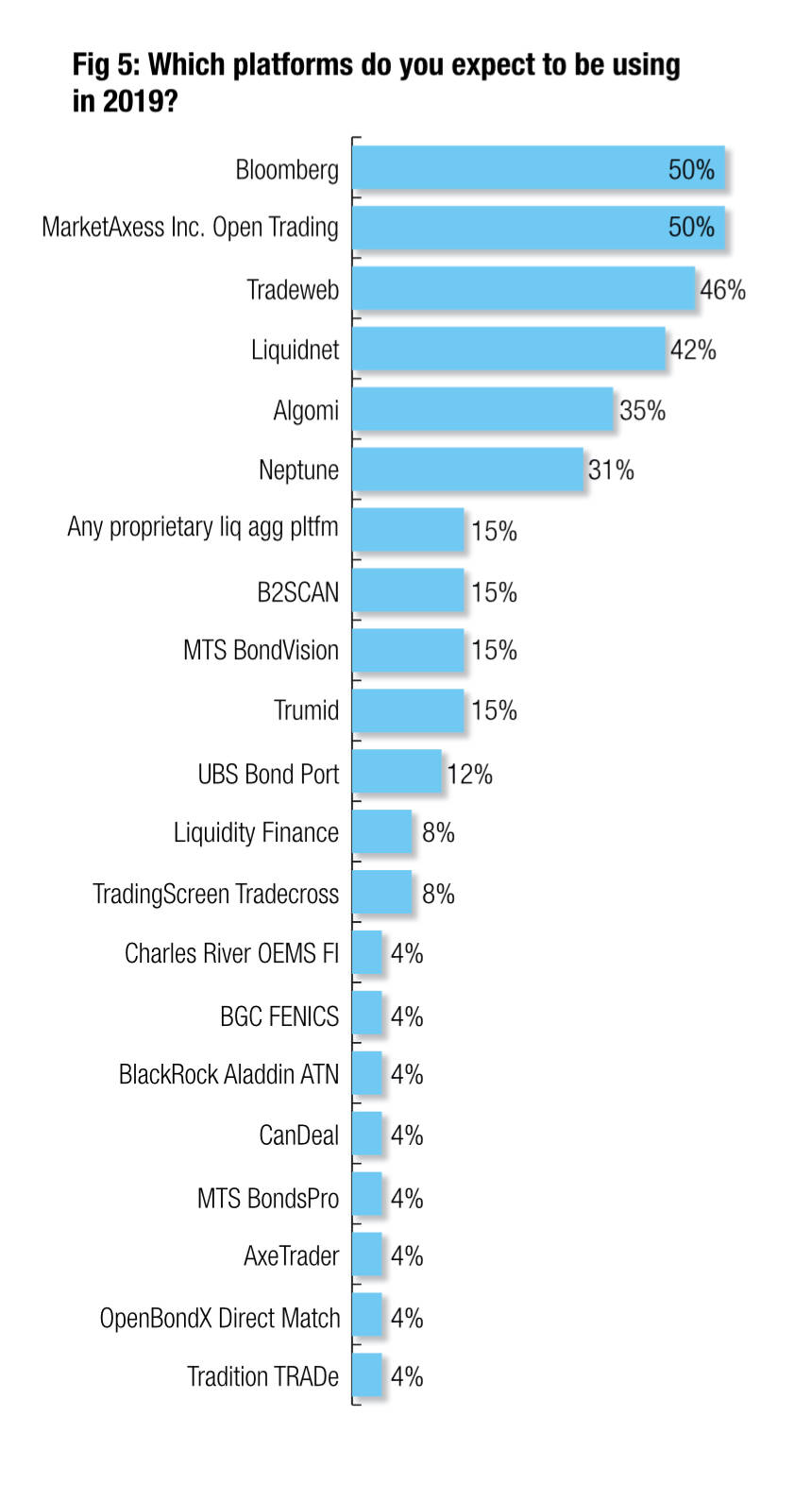 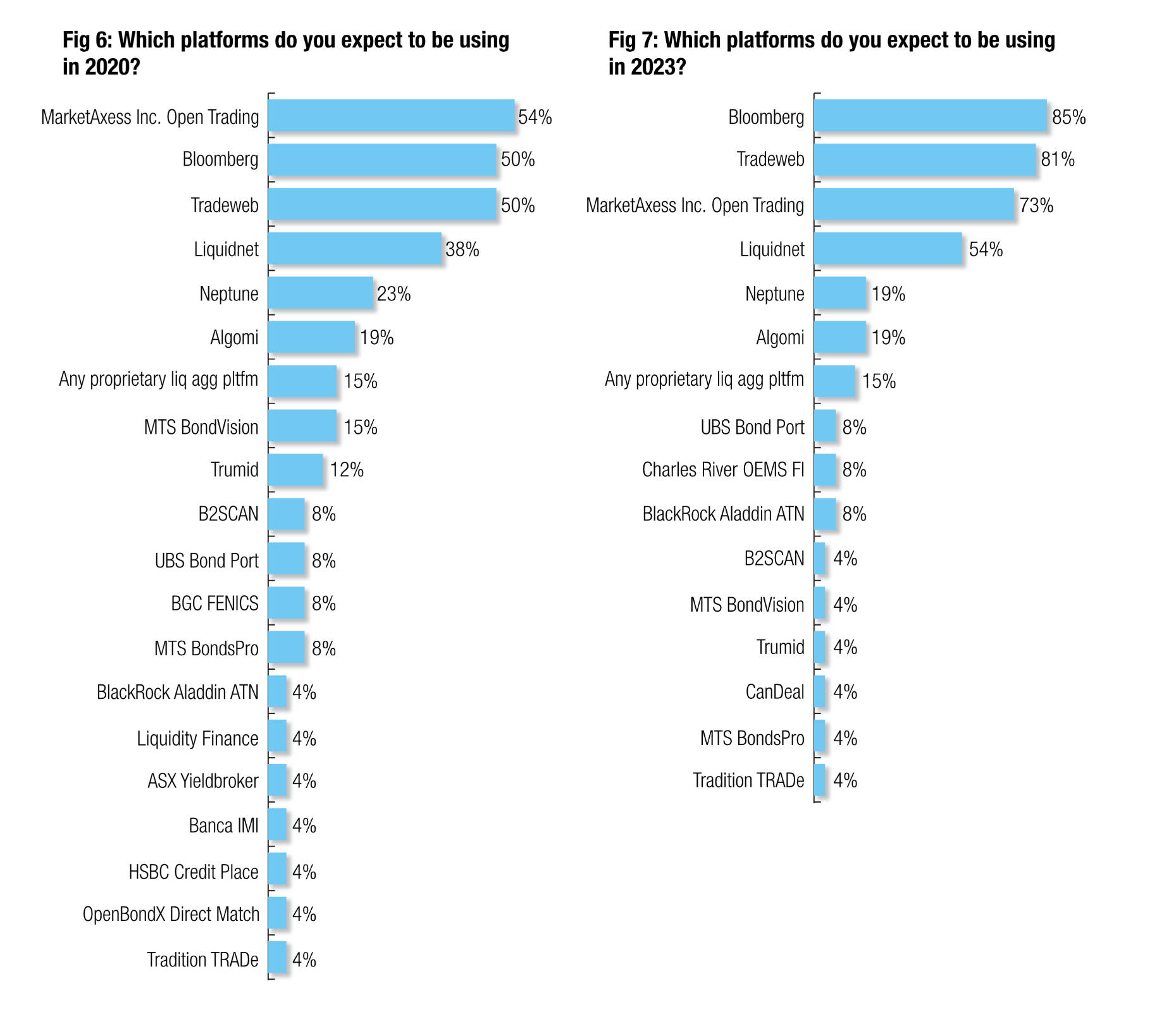 As a force for change in the liquidity landscape, confidence in dealers and regulators has consistently declined since 2015 (see Fig 8), with issuers now seen as being a more likely catalyst than authorities. With the Trump Administration’s focus on reducing regulation, this may not be surprising, however the expectation of change being driven by issuers suggests a formalisation of issuance, discussed since at least 2014, may be gaining popularity as a concept. 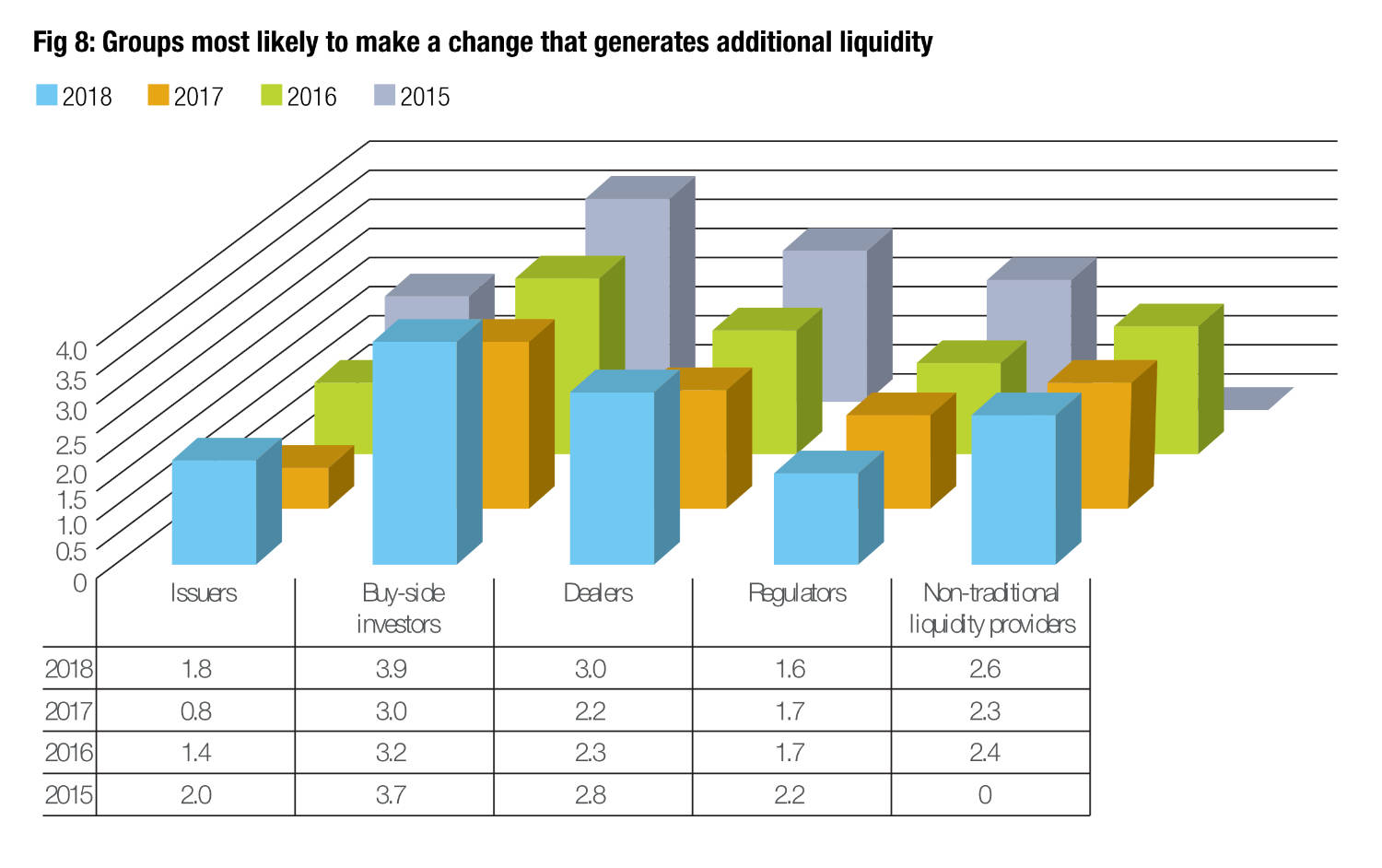 There has been a broad decline in ‘users’ almost across the board, with the exception being for platforms that are making themselves a useful alternative such as UBS Bond Port and Trumid.

The big platforms are more relied upon than ever, and are still seen as the best routes to sourcing liquidity. Platform providers have not had an easy time of it, but as some have fallen by the wayside the pipeline of new users is starting to increase.

Data aggregators are a solid bet for longevity, if they can turn their market share into revenue.

There is still a fight to be had, and market share to be won.

This research was conducted by The DESK editorial team by surveying 26 major investment managers across the US and Europe. 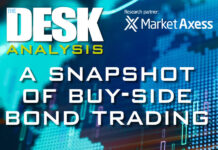 Analysis of The DESK: This year’s complete research into buy-side bond trading desks 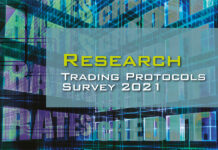 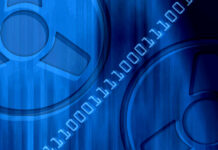 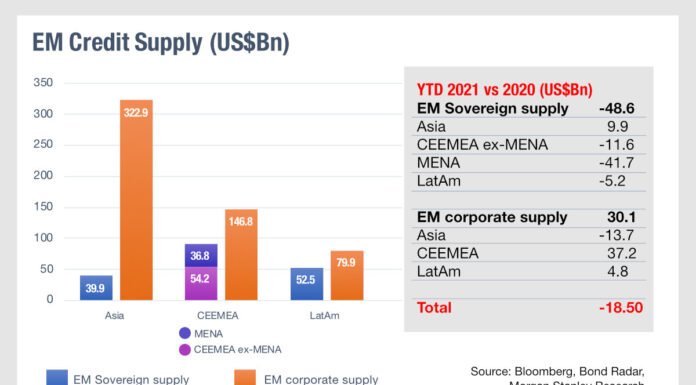