In mid-February, the European Securities Market Association (ESMA) published a formal acknowledgment of ‘process trades’, voice-arranged trades which are processed via electronic platforms. The trades are popular under the Markets in Financial Instruments Directive / Regulation (MiFID II/MiFIR) as they alleviate the burden of trade reporting. In a Q&A document, ESMA sought to clarify the regulatory status of the trades.

“While MiFIR does not have specific provisions for negotiated or pre-arranged transactions for non-equity instruments, ESMA considers it nevertheless possible to formalise negotiated or pre-arranged transactions on a trading venue subject to meeting the conditions for the respective waivers from pre-trade transparency,” it wrote. 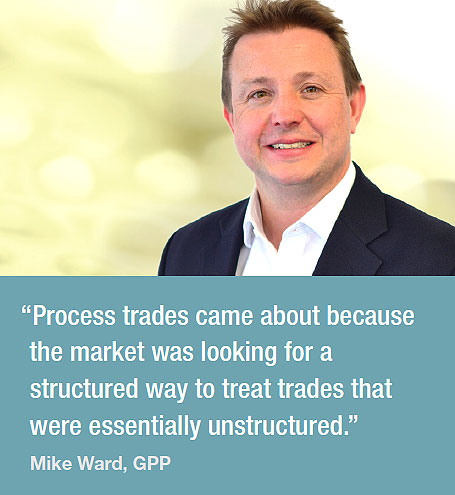 Best execution and reporting requirements under MiFID II have prompted investors to flock to electronic trading platforms since the regulation came into force in January, with volumes surging by as much as 70 percent, according to one venue. Still, when it comes to bigger tickets, a significant chunk of business remains off venue. The new ‘process trade’ protocol has emerged to help those trades stay within the MiFID rules, but has attracted plaudits and brickbats in equal measure.

One of the challenges of MiFID II relates to firms that want to negotiate orders over the phone for best execution purposes and to minimise information leakage. If they transact off-venue, they need to comply with the directive’s onerous post-trade reporting requirements. In that scenario, firms that do not wish to do their own reporting have three options.

The first and simplest is to trade with a MiFID-defined Systematic Internaliser (SI), which will handle post-trade reporting for them. The second is assisted reporting, in which again a sell-side firm will report the trade, but the client is required to check the report is accurate – a fairly onerous requirement where several venues or Approved Publication Arrangements (APAs) are involved. The final option is the process trade, which is negotiated by voice and then executed on venue, making the venue responsible for reporting under MiFID’s RTS 27.

Since process trades emerged last year, they have become the preferred approach for buy-side firms that are not trading with SIs and do not wish to do their own reporting. However, there is some complexity in the way the trades are conducted and executed which means the market is still some way from a settled way of working.

Piecing the trade together

“Process trades came about because the market was looking for a structured way to treat trades that were essentially unstructured, which was scalable and would meet the requirements of the regulator,” says Mike Ward, head of trading at prime broker GPP. “However, what we have now is a number of tactical fixes, while what the market needs is a longer-term strategic fix.”

From a regulatory reporting perspective both approaches are deemed to be “on venue”, where execution takes place, so the distinction is arbitrary, but from the buy-side and sell-side perspective it matters because the place of ‘execution’ and the subsequent timestamp inform record keeping requirements, analysis of best execution, transaction cost analysis and liquidity analytics which are used on trading desks increasingly. MiFID II requires all trades to be timestamped to a high level of precision, to meet the most fast-paced execution mechanics of high-frequency trading.

From the bank’s point of view, its hedging strategy might differ depending on whether it has offered a firm or indicative price over the phone.

Other challenges relate to workflow. Where a price is agreed, there is no need to go on venue and have another discussion, which clearly marks a trade out as being a process trade. However, if the price is indicative and is followed by an RFQ on venue, then there is no prima facie difference at execution between that trade and a conventional on-venue trade. The reality is that traders must tick a box specifying it’s a process trade – but it’s very easy for them to forget to do so. 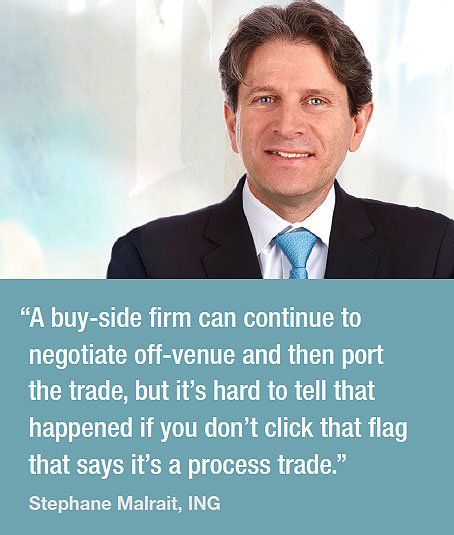 “For the buy-side firm, they can continue to negotiate off-venue and then port the trade, but it’s hard to tell that happened if you don’t click that flag that says it’s not an RFQ, it’s a process trade,” says Stephane Malrait, global head of financial markets eCommerce at ING. “From the regulation point of view it doesn’t really matter, but it makes a big difference from the market maker perspective.”

With market participants still working out ways to ensure their workflows comply with the regulations, the segment for now comprises a relatively small proportion of the market, Malrait said, with something like two out of every hundred trades being classified as process trades.

“Our aim was to offer a flexible form of execution that enabled market participants to maintain their relationships and still execute on venue,” says Simon Maisey, managing director and global head of business development at the firm. “So far the majority of trades we have seen have been PIT trades. PAT also works as a venue trade but the workflow is more complex and involved.”

One issue for market participants is the biggest bond trading venues have not reached an agreed approach to process trade workflows, and the industry is pushing hard for a joint effort to agree one standard.

“We’re looking at data identification of process trades, which can help to ensure the accuracy of these trades and where they occur,” says Barclays’ Coupe.

With venues competing for flow, it is understandable that there may be some reluctance to harmonise every aspect of trade workflows, but Coupe is leading a FIX Trading Community initiative to encourage co-operation.

“A lot of work is underway in the industry with a view to developing a codified process and standardised fields and formats,” he said. “But it doesn’t happen overnight and we’re adopting an educative approach.”