The Common Domain Model (CDM) introduced by the International Swap and Derivatives Association (ISDA) presents a real opportunity for traders to expand the efficiency and automation of financial markets. To date they have not managed to get rid of the costs incurred when reconciling accounts, integrating systems, complying with transparency and reporting requirements.

Standard-setting organisations have played an important part in streamlining the lifecycle of financial agreements from execution to settlement. In particular the International Swap and Derivatives Association (ISDA) had an important role in standardising contracts in the period 1990-2002, by introducing the Master Agreement, and by systematising derivatives collateralisation practices, with the introduction of the Credit Support Annex and more recently the Standard Initial Margin Model. ISDA’s attention has progressively shifted from the legal representation of agreements to the standardisation of their digital representation which is fed to the IT systems that manage the lifecycle of an agreement. An example is the development of Financial product Markup Language (FpML), a mark-up protocol for representing derivative contracts. In this context, ISDA recently introduced the CDM, a data model that defines a common ground for market participants in terms of problem domain. The CDM is an evolution of business information exchange standards such as FpML, with the aim of allowing market participants to share not only financial contract details, but also elements of the underlying financial logic and workflow events along the lifecycle of trades.

The news hitting the market in 2019 is that ISDA is pushing the boundaries of its effort outside derivatives and into the securities area, and for this purpose it has joined forces with ICMA (International Capital Markets Association). ICMA is cooperating with ISDA to extend the CDM to include securities transactions: “a single, common digital representation of securities trade events and lifecycles intended to enhance standardisation and facilitate interoperability across firms and platforms”.

The CDM aims explicitly at tackling the silo culture that often afflicts the development of technological solutions in financial markets; for a start, nowadays securities and derivatives can no longer be treated as separate worlds. Not only are they linked in hedging and holistic risk management, but today they are also inextricably connected by the derivatives margination process, particularly for Initial Margin. The very concept of risk-free interest rate, a staple of the global derivatives market framework, is shifting towards secured benchmarks such as the SOFR; the quantitative community even debated for some time the possibility of abandoning the risk-free rate concept in favour of the collateral financing rate on margined lines.

On the other hand, securities markets have an established information exchange standard, provided by the FIX protocol. As with FpML, the CDM can be naturally integrated with this existing protocol by well-defined synonyms and aliases, as ISDA introduced by design the possibility of automatic translation from and into other protocols.

In the light of the above considerations, it came as no surprise that securities were the focus of the second Barclays Hackathon on CDM in 2019, a competition for programmers to develop applications using the CDM. The purpose of the hackathon was to standardise and streamline the crucial passages in securities trading: Execution, Affirmation, Confirmation, and Settlement. Despite past efforts, the different systems involved in those different passages do not have a common language yet, nor a common representation of products and events. We have seen that the CDM aims at to becoming such a common language, as a framework for the internal representation of data and the internal event model in all different applications, or simply as a lingua franca such that all applications can translate from their internal representation to CDM and vice-versa. The banking world knows that lack of interoperability is one of the big issues of legacy infrastructure.

Additionally, today systems communication is mostly the acknowledgement of the receipt of information. In the CDM Hackathon, participants used CDM and distributed ledgers to organise these passages as smart contracts, where the actual agreement between the parties is verified and notarised as part of the communication process. This makes the process much less prone to the need for frequent reconciliation, one notorious problem of financial transactions.

Indeed, some of the Fintech promises may remain empty vessels if the market does not agree on a technical common ground for interoperability. This concerns in particular some much-hyped concepts such as smart contracts and blockchain. The CDM could provide this common ground. It is explicitly defined as “a standard upon which existing and emerging technologies such as distributed ledger, cloud, and smart contracts can be built”.

With Market Hub, Banca IMI’s electronic multi-asset agency execution platform, we have started a proof-of-concept to use the CDM in the interlinkage of the different systems involved in securities trading, from managing orders to back office, to develop efficiency and increase client experience. In this proof of concept, the common standard interacts with the technology of smart contracts and distributed ledgers. Essentially, every different system, and every different actor, first internally and potentially externally as well, can be associated to a node on a distributed ledger network; all the other nodes in the network will be able to access and process the information based on the common representation, without the need for reconciliation. The distributed ledger provides an optimised connection and synchronisation across the nodes; the CDM provides persistence to objects and events when interacting among applications, being the common representation adopted in the network by all nodes. This greatly simplifies integration and interoperability: any application that can “speak” CDM will be promptly and seamlessly connected to the network. This also improves risk management and position keeping by increasing efficiency and giving persistence to those features of an agreement that can impact its risk profile. The properties of a distributed ledger, which is a precise authenticated record of every market data and event, can also become useful when achieving and proving best execution.

The applications of CDM do not necessarily require interaction with distributed ledgers. For example, standardisation of the full digital representation of a financial product and its lifecycle can be a game-changer for financial reporting: reports could be automatically generated starting from the CDM code, reducing the workload and lowering the risk of misrepresentations and conflicts. For institutions struggling with a flow of reporting regulations culminating with SFTR, this could be the first killer application. 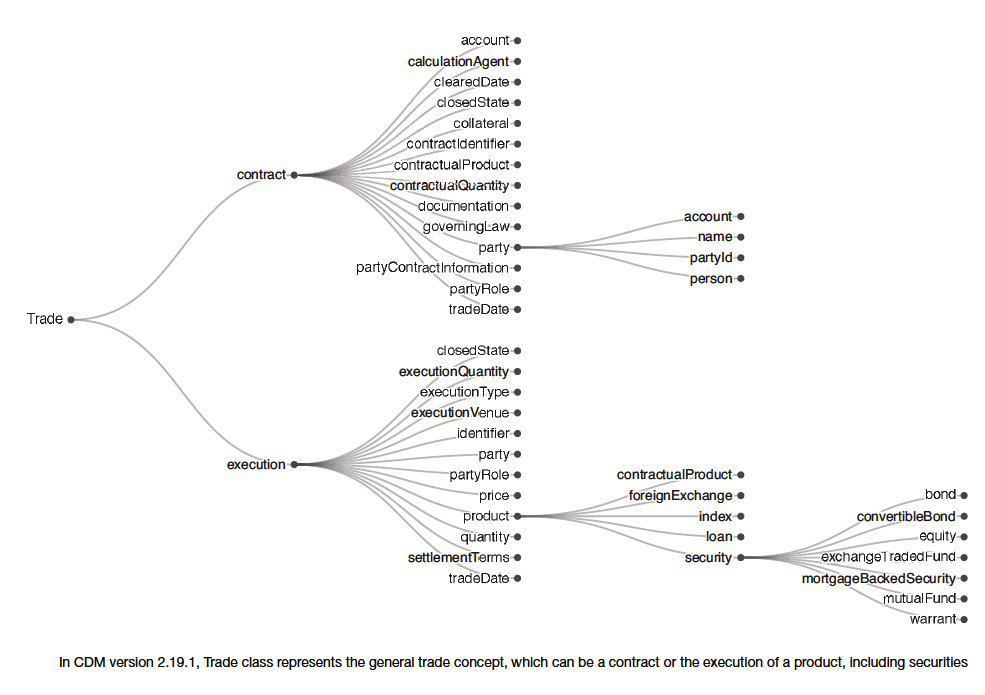