In the coming weeks, the European Securities Markets Authority (ESMA) has said it will provide greater clarity around the definition of Trading on Trading Venue (TOTV), a component of the revised Markets in Financial Instruments Directive (MIFID II).

Under MiFID II equities and certain derivatives are obliged to be traded on regulated market, a multilateral trading facility (MTF), systematic internaliser (SI) or a venue in a third country that is deemed equivalent. Derivatives are subject to the trading obligation (TO) if they are obliged to be cleared under the European Markets Infrastructure Directive; admitted to trading, or traded on, at least one admissible trading venue; and are deemed ‘sufficiently liquid’ under the regulatory technical standards (RTS). However the MiFID II text uses the term ‘traded on a trading venue’ (TOTV) as a categorization of a derivative.

“We have had a number of debates in the industry; does TOTV mean traded on a trading venue or does it mean admitted to trading on a venue?” asked Matthew Coupe, director of Market Structure at Barclays Investment Bank, speaking at the EMEA Trading Conference on 2 March 2017.

Rodrigo Buenaventura, head of markets at ESMA acknowledged the issue was one the regulatory body needed to address. 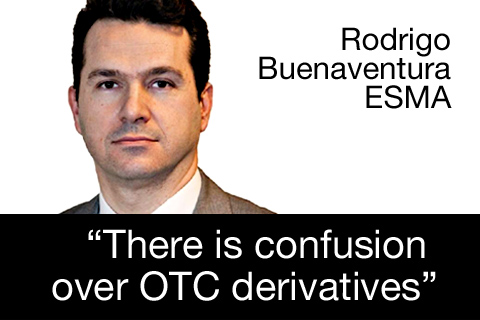 “[TOTV] provides transparency provisions and transaction reporting which is evident for securities but not that evident for over-the-counter (OTC) derivatives,” he said. “We need to provide some guidelines because there is confusion over OTC derivatives, particularly swaps, as whether they would be traded on trading venues or not. “We are working to publish some guidance in the form of a Q&A or something similar to address that topic, we know it is important and I expect that to be available in the coming few weeks. We know the implications of TOTV are important, which is precisely why the EU is taking time to respond to [TOTV-related discussions].”

Coupe added that implementation of this regulation will be challenging, since these rulings (as part of MIFID II) will be enforced in January 2018.

“[TOTV] is a massive implementation point for all firms,” he said. “If we get [the guidelines] in April that means we have seven months to get the build done. We have tight time frames to be compliant.”