In October UK consultant Market Structure Partners was awarded a €294,000 contract by the European Commission (EC) to deliver a comprehensive study into how a consolidated tape – which provides real time data to every market participant at a nominal price – can be delivered across the EU for non-equity asset classes, including fixed income. The study is contracted for six months with expectations for publication next spring.

This is the first step towards development of a post-trade tape of bond trades in Europe, something the US market takes for granted. Its Trade Reporting and Compliance Engine (TRACE), run by industry body the Financial Industry Regulatory Authority (FINRA), was rolled out in a phased approach in the early 2000s, and now provides public access to post-trade corporate bond activity and access to regulators for US Treasury trading activity.

Galina Dimitrova, director of investment and capital markets at buy-side trade body the Investment Association (IA) says, “Ensuring equal and sufficient access to market data for all investors and savers underpins the fair and effective functioning of the market. We support the development of consolidated tape.”

However, it is potentially a very slow process. The second Markets in Financial Instruments Directive (MiFID II), which came into effect on 1 January 2018, only established the provisions for a consolidated tape provider (CTP) for non-equity markets from 1 September 2019. The Directive provides for a review provision for the non-equity consolidated tape (CT) under Article 90(2) of MiFID II, and the EC is required to present a report on the non-equity CT to the Council and the EP by 3 September 2021.

Tripping over the tape

There are risks at this stage. The first is that misunderstanding of the bond markets could lead to inappropriate rules being written. Precedents for this include Europe’s methodologies for calculating bond liquidity under MiFID II, which came into force in January 2018, and have been questioned by market participants for labelling some illiquid bonds as liquid.

A European Securities and Markets Authority (ESMA) consultation into the consolidated tape for equities, which closed in September, may inform the development of a tape for non-equities, and this raised concern amongst observers.

In its response to ESMA’s equity tape consultation, the International Capital Markets Association (ICMA) wrote that equities and bonds had “profoundly different ecosystems” and needed to be treated accordingly.

Too quick for comfort

A second risk is that lobbying might skew the outcome in favour of one group against another. For example, in the US debate has raged over the correct period after a trade in which to publish information on TRACE.

If the delay is too short, traders who have large positions to trade may find their positions are exposed as dealers spot how they are trading. However, firms that trade more systematically in smaller sizes may see an unfair advantage if they are not made aware of firm’s trades in a timely manner.

“When TRACE was set up in the US, we noticed that the added visibility helps prevents the large, ‘gappy’ moves that you can see in the European [bond] market. In addition to having transparency, it is a good for the market to have everything from price discovery on a pre-trade basis to post trade best execution reviews.”

But translating TRACE to Europe is not straightforward. As Callaghan points out, the EU is highly fragmented and without its own version of FINRA. It will not be possible – certainly not within an acceptable timeframe – to replicate TRACE for the European market, she argues.

The absence of a trusted, centralised and, critically, consolidated pool of data for traders, somewhat undermines the objectives of MiFID II. Much of the Directive – and that of its counterpart regulation MiFIR – centres on providing transparency across the entire trading process to ensure fairness for investors. It applied best execution obligations across assets, requiring buy-side traders to build policies, and to report on execution quality.

Equally, best execution obligations are not helped by an absence of consensus on price. Currently data is collated by a limited number of commercial entities. There is some concern that this creates an unlevel playing field since smaller traders may struggle to afford to pay for the same data standards of their better resourced counterparts.

In its response to the consolidated tape consultation, ICMA stated, “…equities and bond markets share a few challenges such as fragmentation of infrastructure and an unlevel playing field, benefitting only those who can afford to pay for data.”

The private sector is reluctant to fill the breach, as a CPT which carries challenges not seen for a private data provider.

Jason Waight, head of business management and regulatory affairs for MarketAxess and Trax says, “No one wants to do it because it is a highly regulated business; it is tough, expensive and the returns are uncertain.”

Gibson agrees there is little commercial incentive at present to encourage a private provider to offer a consolidated tape to the fixed income market.

She says: “A non-regulated data sharing solution has been discussed within the buy side, in various forums; the complexity lies in the governance and the reality is that running a buy-side data utility is not in the day job, so no one stepped in to do it.”

It is this lack of commercial provider that has led to the current wall against which the push for consolidated tape is now stuck.

European regulators are keen to see a consolidated tape from which participants can garner the information they need for a fair price. This is widely supported by traders and industry bodies alike. 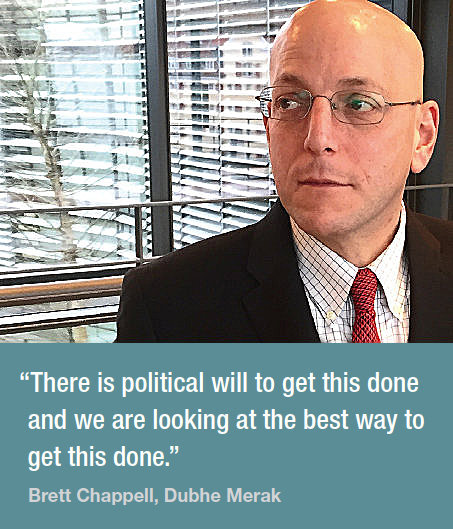 Callaghan says, “The governance and pricing methodology must be solved. The conundrum is revenue potential for the consolidated tape provider and minimum costs for market participants. In order to succeed, there needs to be a win/win.”

There are still numerous problems to iron out when it comes to providing a consolidated tape – irrespective of it being in the public or private sector – not least in the very nature of the fixed income beast itself. Since the asset class has very varied levels of liquidity, real-time transparency only comes into play for certain instruments.

Waight says, “With fixed income, the data becomes available in dumps in line with the deferrals, whether that is T+2 or in four weeks. So that real time tape isn’t there for us to sell now.”

He argues that many investors and traders are not even looking for real time data via a consolidated tape.

“What is more popular with clients are intelligent pricing products, such as Composite+, an algorithmic pricing engine which gives an accurate price based on various indications of where the market is with that bond at that point in time,” he says. “So, at the moment, commercial products like this can give you a better sense of where the market is than a regulated data feed.”