MiFID II obliges buy-side firms to apply best execution rules to fixed income trading, but the concept is far more qualitative than within equity markets. Buy-side firms are obliged to provide clients with best execution on corporate and government bond trades, and so traders are assessing best execution policies, and transaction cost analysis (TCA), for support in meeting requirements. Under RTS 28, buy-side firms will be required to file annual reports on best execution.

Fixed income has characteristics that make it standout even amongst other asset classes; the number of instruments issued, differences between types of bonds, lack of fungibility between issuers’ own securities. With so many variables it is hard to measure activity in a like-for-like manner. Added to that is the over-the-counter (OTC) nature of the market. Bilateral trading makes it hard to capture meaningful data to measure performance. In Europe there is no central source of post-trade data, and there is, as yet, no comprehensive tool to aggregate data. 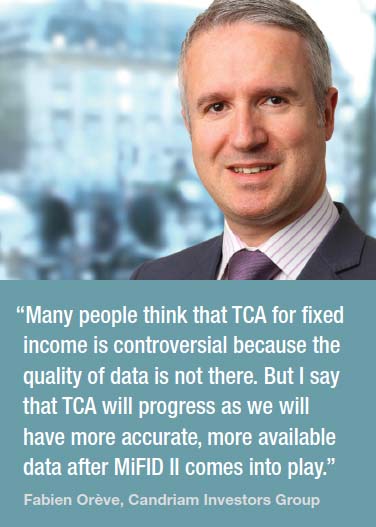 Speaking at the Fixed Income Leaders Summit in Amsterdam, Fabien Orève, global head of trading at Candriam Investors Group, said: “Many people think that TCA for fixed income is controversial because the quality of data is not there. But I say that TCA will progress as we will have more accurate, more available data after MiFID II comes into play.”

However, even where data is available, TCA cannot be applied in a one-size fits all approach in fixed income. Corporate and government, and investment grade and high yield instruments demand differing methodologies. In particular, the process for liquid, on-the-run corporate and government bonds differs greatly from the best execution process for illiquid, off-the-run issuances.

Fixed income market participants using TCA for purely regulatory compliance should look for providers that have tailored offerings to the firm’s area of operation, rather than applying a cookie-cutter approach to all trades.

A GreySpark report on TCA solutions for fixed income explored the methodologies which are currently available to measure performance, setting out the various specificities of fixed income markets.

The following methodologies were outlined as traditional methods for measuring fixed income liquidity and the quality of pricing received on a trade:

• Difficult to create VWAP-based benchmark for all but the most liquid of bonds markets, due to the quote-driven nature of trading;

• Few electronic bond trading platforms are able to offer a composite form of VWAP based on market share, however the benchmark is still dependent on tick data.

• No weighting is applied to the volume of a trade; more appropriate measure for low liquidity environments where trading volume is lighter.

• The difference between the decision price and the final execution price;

• Encompasses a wider variety of decision prices that can measure different action points in the trade lifecycle;

• Near and far touch variations of implementation shortfall, which use the bid or ask price instead of the midpoint, are increasingly being offered by fixed income TCA offerings.

The appropriateness of these methodologies clearly depends on the frequency and size of trades; block size OTC trades will need a different approach to smaller ticket size orders, while high-frequency markets demand an alternative to corporate bond trades. It would be naïve to assume that TCA can be used in a simplistic way.

“You need to take account of the idiosyncrasies of the asset class you’re working in, however it would be incorrect to say there’s no value in trying to create TCA in the credit space,” says Gareth Coltman, head of European product management at MarketAxess.

Once methodologies are determined, however, the next challenge is how to measure the data that comes from the TCA reports. Benchmarking is a key area of concern for traders and investors, with most pre-trade content available provided by traditional market makers. This content, however, is not always based on true traded price data. In order to meaningfully analyse the data, investors need to be able to look at a historical dataset, finding out the level of pricing achieved, and benchmarking that against orders.

Benchmarks can be categorised into absolute or relative measurements of cost, which GreySpark described as “critical for users of fixed income TCA systems to have an understanding of.” Absolute benchmarks give insight into overall trade effectiveness, while relative benchmarks “seek to provide a snapshot of execution performance.”

Orève said, “If you properly rank your broker dealers for trading under similar scenarios, you will more easily understand trends in your fixed income business, detect outliers and eventually you will improve your entire execution process.”

Post-trade data sets such as those that are commercially available, such as Trax in Europe, and the publicly available such as TRACE in the US, can give clients a pricing benchmark from which to assess their own execution reports.

Russell Dinnage, head of capital markets intelligence at GreySpark says “The core is that without that historical data set, the only measurement that you have is the standard industry benchmarks. For a comparable, telling benchmark to ensure best practice, you want to use internal benchmarks.”

As the amount of available pricing data grows under MiFID II, there will be a wider picture on benchmarking, producing a more valuable TCA offering in the whole spectrum of fixed income. Execution venues, including regulated markets (RMs), multilateral trading facilities (MTFs), organised trading facilities (OTFs) and systematic internalisers (SIs), are required to make the data necessary for TCA available publicly after 15 minutes.

GreySpark’s report identified the key offerings firms will be looking for in TCA services:

• Spread the cost of low-latency data connections needed for pre-trade, real-time TCA across their customer base;

• Reduce the technological challenge and cost of integration;

Ultimately the most effective offerings will utilise TCA to analyse across the whole lifecycle, providing the most effective feedback on trades. Under MiFID II, a consolidation of the post-trade data published to Approved Reporting Mechanisms (ARMs) should be possible, if not a logical consequence, similar to TRACE in the United States.

Dinnage says, “It’s likely that in a period of time, between 2018 and 2020, that they are going to be pulling together independently consolidated Approved Publication Arrangement (APA) feeds or claiming to be consolidated tape providers. But the end goal is that, eventually in Europe, there will be a consolidated tape as there is in the US.”

Constantinos Antoniades, head of fixed income at block-trading specialist Liquidnet comments, “The future of electronic trading is in the combination of intelligent execution at the platform level, better data aggregation at the trader side, and more interconnectivity among different pools of liquidity.  These can augment the trader and the decision-making process with the outcomes being better access to liquidity and greater alpha generation.”

As access to data grows across the board from MiFID-directed APA data, and drawing together a wide range of consolidated data, measurement of performance will become more accessible, fulfilling end-investors’ aims, as well as providing feedback to traders across the cycle.

The challenge still remains in aggregating the wide range of data. However, in the fixed income space there is guarded positivity for the opportunities in TCA.

“There is a growing amount of pricing data to allow you to put together valuable TCA across the whole fixed income spectrum, but in credit and the more illiquid securities, it’s going to have to be considered alongside the best execution process of the firm,” says MarketAxess’ Gareth Coltman.

The current issues facing traders and investors, of fragmented liquidity, obscurity of pre- and post-trade data, as well as the lack of consolidated data on illiquid trades, and benchmarking sees many wondering if TCA complements or contrasts with best execution analysis.

Liquidnet’s Antoniades says, “Focus on best execution analysis and best execution process makes much more sense than a TCA style analysis that may often may be based on partial or even inaccurate data.  The availability of accurate market prices in the corporate bond market is not at the level to support equities-style TCA.”

However, there is pressure on firms to look towards policies that will fulfil regulatory requirements and show as much best practice as possible in a quantitative manner. Coltman sees the demand as indicative of this one-policy approach to asset performance.

“The end investor is driving the interest in TCA and is looking for a way to measure the performance of asset managers,” he says.