At least 5% of treasuries volume is self-trading yet the legality of these trades is unchecked. Dan Barnes, reports.

Self-trading is defined as a transaction in which the same entity takes both sides of the trade so that no change in beneficial ownership results.  Source: Joint Staff Report on the U.S. Treasury Market, October 15, 2014

Wash trades and spoofing both create a false impression of market activity. In the US Treasuries market, self-trading – which if intentional, is considered an illegal wash trade – makes up around 5.6% of market volume on an average day in cash markets, according to market regulators. 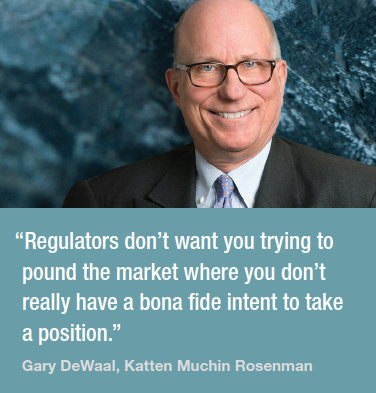 Gary DeWaal, special counsel at New York-based law firm Katten Muchin Rosenman says, “Remember there are the two concerns about electronic trading; purposeful trading, characteristic of what people refer to as ‘spoofing’, but also reckless or intentional behaviour that disrupts the market generally, which can come about for many reasons.”

The Commodity Futures Trading Commission (CFTC) found that in February 2015 intra-firm self-trades in one Treasury future contract that it studied were almost 10% of all trades in that contract, increasing to almost 15% on individual days, while self-trade rates for several other contracts were around 5% of total activity.

Intentional or not, if one in 10 or 20 trades lacks a real counterparty, self-trading is creating a misleading impression of market activity. One event marked this activity out, and led Mary Jo White, formerly head of the Securities and Exchange Commission (SEC), to propose development of a new rule

The flash crash of 15 October 2014 saw the yield in US treasuries plummet with a corresponding spike in the price, without any underlying reason, and then rebound. Trading during that period was marked by several features, notably high levels of self-trading amongst high-frequency trading (HFT) firms. The multi-agency report on the flash crash event window found “the share of overall transactions resulting from self-trading was substantially higher than average. At the 10-year maturity, it reached 14.9% and 11.5% for cash and futures respectively, during the move up in prices in the event window.” 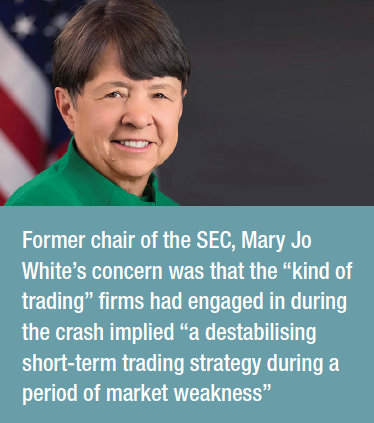 That self-trading was directional; for example, the report notes that “between 9:33 and 9:39 ET, the cumulative net aggressive buyer- minus seller-initiated self-trade volume increased by around $160 million in the cash 10-year note, accounting for close to one-fifth of the total imbalance between buyer and seller initiated trades observed over that time interval.” Conversely, the rate fell to 1.2 percent and 4.8 percent in cash and futures as the market corrected.

Of those self-trades, 98.9% occurred at firms that already employ self-matching prevention (SMP) technology, according to market operator CME. The event triggered a regulatory response.

White subsequently announced plans for an “anti-disruptive trading rule” to be developed in US Treasuries, in October 2016, before she left her role as chair of the SEC. Her concern was that the “kind of trading” firms had engaged in during the crash implied “a destabilising short-term trading strategy during a period of market weakness”.

What are regulators missing?

There are already rules that tackle spoofing; that is the submission of orders that are not intended to be filled. Both Rule 10(b) and Rule 10b-5 of the Securities Exchange Act tackle fraud and manipulative & deceptive devices respectively, covering some of these bases. Equally Section 4c(a) of the Commodity Exchange Act tackles disruptive practices.

“The thinking is that spoofing is somehow different from traditional manipulation based on fraud, which 10b-5 is all about,” says DeWaal. “The CFTC never had that authority before Dodd-Frank. They also gained very specific provisions on market disruption. It is not uncommon now that the CFTC charges both, like a belt and suspenders, so it’s certainly intellectually questionable whether you really need [a new disruptive trading rule].”

Spoofing in the Treasuries market is an issue that regulators have acted upon. In January 2017, Citi was fined US$25 million for violating the anti-spoofing provisions of Dodd-Frank between 2011 and 2012, after suspicious behaviour was noted by the CME.

In that case, not only did one of the traders in question fail to successfully spoof the market – the trade they planned to cancel was reportedly executed by accident, resulting in a hefty loss – but they reported their loss and strategy to management who did not respond appropriately, according to the CFTC’s report. Given this effective prosecution, as such, why would there be a need to introduce a new law? 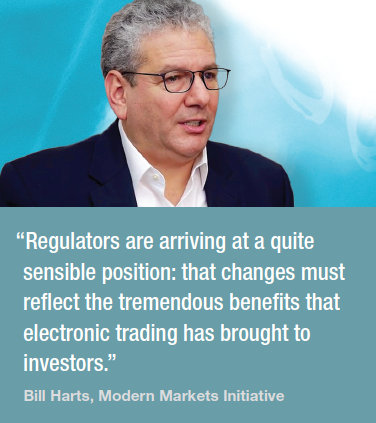 “As regulators continue to think about modern market structure they are arriving at a quite sensible position: that changes must reflect the tremendous benefits that electronic trading has brought to investors,” he says. “Rather than a single ‘anti-disruption’ rule we see regulators plugging some gaps that may hinder their ability to monitor and police the markets using their existing tool set. Examples are the FINRA/TRACE reporting requirements – which don’t go far enough, but that’s a different story – and the CFTC’s Reg AT – except for the source code provision.”

Not only does Reg AT, proposed in 2015, include rules to prevent self-trading, the US Department of the Treasury issued a request for information on the ‘Evolution of the Treasury Market Structure’, in January 2016, which asked “Should self-trading be expressly prohibited in the cash Treasuries market?”

Although several trading venues responded by suggesting there was some price discovery merit in self-trading, and that venues were best placed to impose restrictions, that was not the view of trading firms themselves.

For example, Shane O’Cuinn, managing director for global markets at Credit Suisse, wrote, “We do not see any real benefit to the market from allowing the self-trading of cash securities. The majority of electronic trading platforms have safeguards in place to prevent this from occurring, and we feel such measures should be applied uniformly to all market participants. To this end, rules should be established that prohibit inappropriate self-trading.”

As of August, when The Department of The Treasury last updated the market on progress, no action had been taken or proposed on the issue of self-trading.

The anti-disruptive trading rules that do exist are being challenged. Michael Coscia, the first person convicted of spoofing under the Dodd-Frank Act, was sentenced in July 2016 to three-years in prison followed by two years supervision, for breaking the rules one month after they came into effect. However his attorney has made an appeal on the grounds that the rules are not specific enough, which was heard on 10 November 2016.

“We will know more shortly because there is a US appeals court looking at the spoofing provision right now,” notes DeWaal.

There now are three likely avenues down which a disruptive trading rule for US Treasuries may be delivered. The first of these is via the SEC; its Equity Market Structure Advisory Committee is expected to make a recommendation shortly regarding an anti-disruptive trading rule, and that model will be the basis for that applied to Treasuries. The second is that Reg AT will come through with provisions around self-trade prevention. The third is that The Department of The Treasury will determine whether or not to ban self-trading in cash Treasuries.

“Most people think of traditional manipulation as a corner or a squeeze,” says DeWaal. “But you can purposely disrupt the market by pounding the market with lots of orders and you can artificially cause a movement in the market. I think that’s what the regulators are trying to aim at. They don’t want you trying to pound the market where you don’t really have a bona fide intent to take a position.”

The issue is that bona fide intent is hard to prove. No trader reveals unnecessary data to a counterpart, and drawing a line around what is actively rather than unintentionally deceptive is tricky.

For example, in October 2015 the CME issued guidance on disruptive trading, noting that, “Market participants may enter stop orders as a means of minimising potential losses with the hope that the order will not be triggered. However, it must be the intent of the market participant that the order will be executed if the specified condition is met. Such an order entry is not prohibited by this Rule.”

‘Hope’ and ‘intent’ create grey areas around legal and illegal activity. If Coscia’s defence is validated, regulators will need to rebuild existing rules that can prevent spoofing, potentially in the context of a wider anti-disruptive trading rule.