Target 2 for Securities (T2S), the ambitious brainchild of the European Central Bank (ECB) and Eurosystem, has the potential to lower the costs of bond issuance by tackling post-trade inefficiency, as Flora MacFarlane discovers.

T2S is the securities settlement engine which offers centralised delivery-versus-payment (DvP) settlement in central bank money across all European securities markets. Its aim was to remove barriers and eliminate differences between domestic and cross-border settlement by offering a single market infrastructure solution. Over 20 central securities depositaries (CSDs) migrated to the T2S platform in five waves between June 2015 and September 2017. The initiative has reduced settlement fees to a fixed cost of €0.15 cents for CSDs, which for some markets is a significant reduction; the average national settlement fee in 2008 was €0.73 cents. 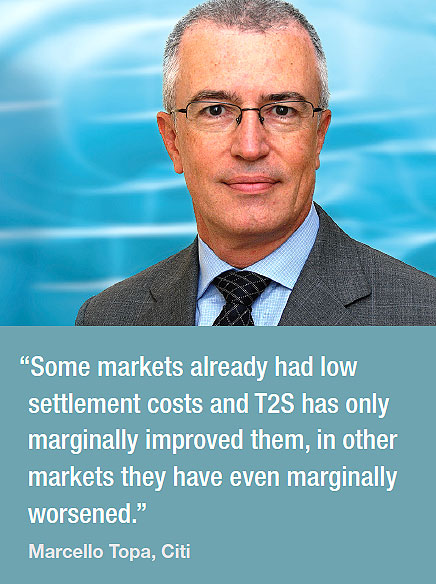 This reduction, which applies to both intra- and cross-CSD settlement, is welcome, and the project has completed its onboarding, now processing about 90% of the total expected volume of securities transactions. At this early stage, and with very little harmonised data with which to compare the evolution, it is difficult to point to quantifiable results; however, immediate cost-savings in fixed income settlement are not apparent, despite a promising future.

“It has not yet materialised in many markets,” says Marcello Topa, head of EMEA market and policy strategy at Citi. “Some markets already had low settlement costs and T2S has only marginally improved them, in other markets they have even marginally worsened. The T2S price list includes not only the €0.15 settlement fee, but also various additional charges based on resource consumption.”

All five waves of T2S migration are now fully complete, with 24 CSDs, representing 20 markets, now connected to the framework. Figures from The German Bundesbank show T2S handling an average of around 550,000 transactions with an average total daily value of more than €800 billion.

Paul Elkins head of product development, RepoClear and EquityClear at LCH says: “There has been a lot of work done to convert the existing settlement infrastructure onto the T2S platform. Market participants are now looking to use T2S to maximise their efficiencies, with the potential to realise reduced settlement costs.”

The principals of T2S have the potential to decrease the cost of liquidity and collateral. Liquidity management, settlement processing, and collateral management are the key areas in which settlement optimisation, and therefore cost efficiency, can be achieved.

Although many banks are taking time to develop their account strategies, at its most simple, investors need only one account to have access to all T2S eligible securities in central bank money, meaning just one single pool of collateral and liquidity is necessary. 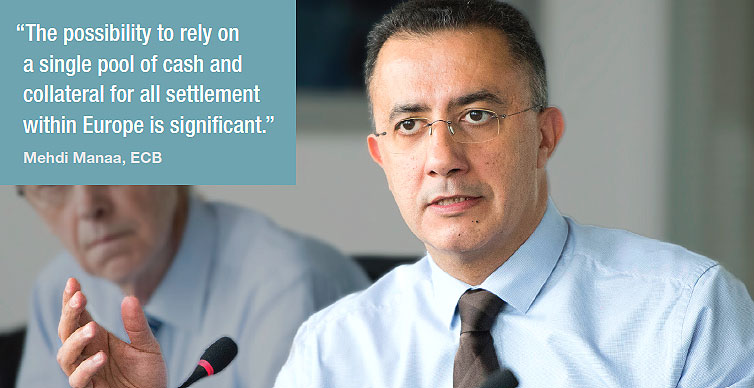 Mehdi Manaa, deputy director general of market infrastructures and payments at the ECB, says, “The possibility to rely on a single pool of cash and collateral for all settlement within Europe is significant. It means that users can serve all their needs in terms of collateral liquidity which is certainly a huge component of cost saving.”

This results also in a significant netting effect, which could be another key capital cost saver for T2S users, after strategies have been decided.

For many, the most significant cost-saver is auto-collateralisation: a credit operation which enables transactions to be settled in the absence of sufficient liquidity. This sees a reduction of intra-day liquidity, cutting credit line usage, and could decrease charges and capital costs for the industry as a whole.

An update at the end of 2017 from Christian Houillon, head of sell-side custody solutions at BNP Paribas Securities Services, revealed that the firm has pooled more than 90% of the cash activity linked to settlement in a single dedicated cash account (DCA), which has limited the need to bring cash to the system during the day.

In addition to the settlement fees, other charges include penalties for settlements after the night-time cycles, later settlement date or for messaging and reporting.

The low fixed fee of €0.15 cents was introduced providing certain assumptions were manifested, including at least 10% of the volumes coming from the non-euro countries, such as those from Scandinavia. Although this has been realised, despite the Danish kroner not due to join until October 2018, the ECB says that prices are likely to increase.

“In the near future we will have to revise our prices. We have a plan for that and will do it in a transparent way with the markets and will try to minimise the impacts,” says Manaa.

The lack of uptake of cross-CSD issuance, for which the cost of settlement fees was expected to fall by up to 90% has been disappointing. It is currently still hovering under 0.5% of total European settlement volumes, with domestic activity preferable over inter-CSD settlement. 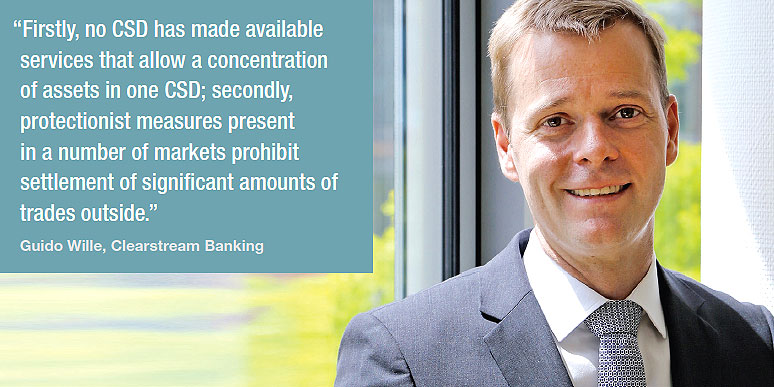 Guido Wille, head of market development and executive board member at Clearstream Banking says, “At the moment, cross-CSD settlement hasn’t yet increased. Firstly, so far no CSD has made available services that allow a concentration of assets in one CSD. Such a service simply doesn’t exist. Secondly, protectionist measures present in a number of markets currently prohibit settlement of significant amounts of trades outside the home market. In the course of 2018, Clearstream will introduce such services by launching its Investor CSD model.”

More cross-CSD settlement would make more eligible Eurobonds available for settlement, which could significantly increase volumes on T2S and produce real cost savings, thanks to the full cost recovery nature of T2S.

Before the harmonised, low-cost settlement process, CSDs were able to make profits on settlement, so many have now adapted their pricing to adjust their sources of revenue.

“In most cases, following migration, the CSDs have adjusted their fee schedules with various price increases. Some prices that have generally gone up are the custody fees, and also the cost of transactions across ‘CSD links’, with additional fees for the required realignment of positions,” says Topa.

Other notable settlement costs are found with intermediaries who provide valuable settlement and custody services, and while it might be cost effective to cut expenditure on them, they may be a necessary link in the chain of settlement activity, depending on the needs of the user.

The anticipated increase in competition amongst CSDs is yet to materialise, with many market participants saying it is too early; however, as settlement strategies are decided, and T2S becomes more engrained, that may lower fixed costs.

Technology fragmentation, headcount increase, and risk overheads all contribute to the expensive nature of fixed income trading in Europe. Despite the existing hurdles, T2S champions claim the platform can streamline operational and business activity.

The ability to access through a single point results in a streamlined technical system, as well as lower operation process fees, for example, fewer specialists needed for specific processes. Using standardised communication protocols (such as ISO 20022) contributes to further cost reduction, and some say there are still areas where additional harmonisation would be beneficial.

Fixed income remains a complex, often inefficient space in settlement in Europe, and while T2S may not result in immediate cost savings, most are in agreement that the harmonisation of the inefficient and fragmented European landscape has been valuable, and the benefits will be reaped down the line if not today.

Citi’s Topa believes this is just the beginning and users must learn how to utilise the platform in the most efficient manner. However, Clearstream’s Wille warns that the “wait and see” attitude may prevail for some time.

“There’s a lot of complexity involved in this process,” he says. “To actually implement these changes is cost and time consuming. At the moment, the market is looking at who will move first. Once it has been proven that it works, we expect to see much more activity.”