On 30 November 2020, S&P Global and IHS Markit announced that they have entered into a definitive merger agreement to combine in an all-stock transaction which values IHS Markit at an enterprise value of US$44 billion, including US$4.8 billion of net debt, according to analyst firm Burton-Taylor International Consulting.

The deal would certainly spark changes in the competitive dynamics of the global market data, analytics and index provider spaces. 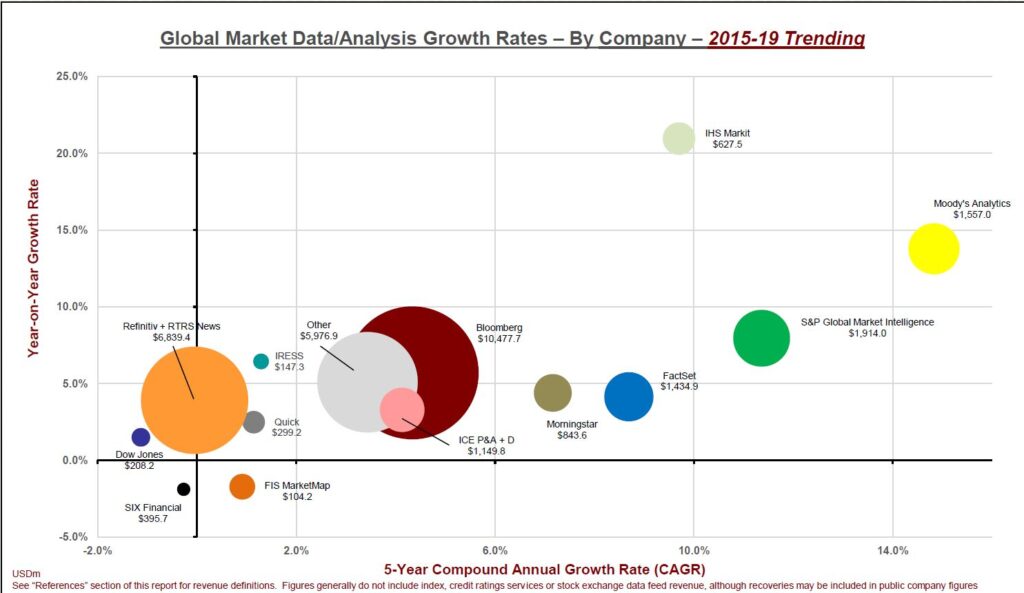 In 2019, Refinitiv revenue was US$6.8 billion, up 3.9% with relatively flat overall growth. For Refinitiv, real-time and trading data comprised 62.5% of the firm’s 2019 revenue, which Burton-Taylor noted was a higher percentage of revenue than any of its key competitors. While Refinitiv’s data feed business grew only slightly (1%) in 2019, but its 5-yr CAGR of 9% provides consistently strong revenue.

By comparison, Bloomberg’s overall financial market revenue grew 5.7% to US$10.5 billion for the first time in 2019, continuing its leadership among providers of market data. Bloomberg terminal revenue as a percentage of Bloomberg financial services revenue has dropped from 85.2% to 75%, and terminal revenue as a percentage of total company revenue from 85.2% to 72.4% since 2010.

Next year will likely see the completed acquisition of Refinitiv by the London Stock Exchange Group (LSEG) and certainly the effect of a new fee schedule from Bloomberg for its fixed income trading business.

Both will potentially see significant changes to their client relationships as a result.

S&P Global saw total revenue increase 8% in 2019, primarily driven by growth in annualised contract values in the market data intelligence products. Its five-year CAGR of 11.4% makes S&P one of the fastest growing companies in market data according to Burton-Taylor.

IHS Markit’s 2019 revenue was US$627.5 million, an increase of 21% on 2018 and with a five-year CAGR of 9.7%. As it is primarily serving the investment management community its pricing, reference and valuation data feeds were up 25.1% in 2019 and accounted for roughly US$546 million in IHS Markit revenue.

The proposed acquisition of IHS Markit by S&P Global, which also owns sell-side front office analysis firms Coalition and Greenwich Associates potentially creates a single entity in the financial data space, with some of the highest growth rates in the market across a five-year and year-on-year basis.