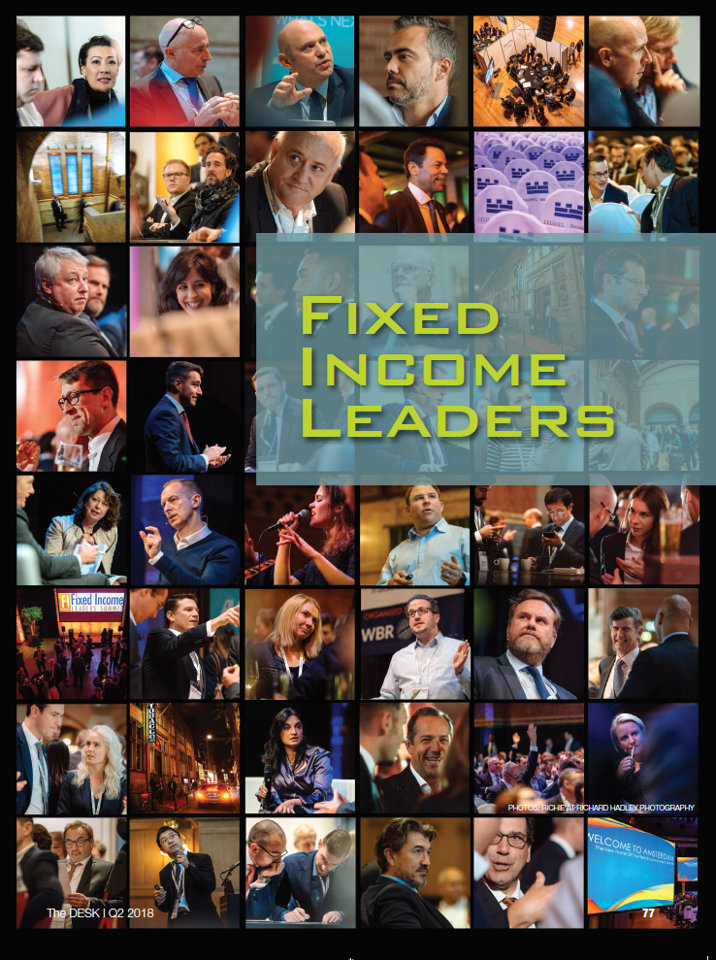 The DESK spoke with members of the advisory panel for FILS Amsterdam to assess the likely agenda.

In November 2018, Brexit will be just months away. However, the hangover from 3 January 2017 will still be playing out in the minds of many buy-side traders. At the Amsterdam Fixed Income Leaders Summit (FILS), expectations are that many conversations will be about the known after-effects of MiFID II, rather than the unknown aspects of the split between the European Union and the UK.

“It is too early to disclose key decisions about Brexit, although the firm is analysing the impact carefully,” says David Saab, global head of fixed income and absolute return funds at JP Morgan Private Bank.

More apparent are the issues that have arisen as a result of MiFID II. If anything it has proven the ineffectiveness of applying equity models to the fixed income market. The European Securities and Markets Authority (ESMA) said in May that only 220 bonds out of 71,000 it looked at were liquid enough to fall under its transparency regime. That has drawn criticism from Members of the European Parliament as well as market participants. Price transparency has not been improved by the rules, nor has there been any significant impact on trading, beyond an expensive layer of administration.

Generating value from all of the information that is being disclosed is potentially a competitive edge for asset managers, but clearly work needs to be done.

“With more data available, the next big step is how we get all that data together, and how it can become useful for trading desks,” says Lee Sanders, head of FX and fixed income trading at AXA Investment Managers. “Collating it has not been easy; there are lots of different sources, there are commercial aggregators and I think how the buy side taps into that aggregation will probably be key going forward.”

ESMA has rejected a proposal that it should operate a consolidated tape of trading data, as is operated by the Financial Industry Regulatory Authority (FINRA) in the US. Consequently only commercial models will be available, inevitably creating fragmentation rather than consolidation. That is likely to be a big issue at the event.

“The main conversation will be about getting hold of fragmented data,” says Mike Poole, senior fixed income dealer at Jupiter Asset Management. “There will be more talk about post-trade than pre-trade. Pre-trade will still be an issue given that one of the largest pre-trade mechanisms has started charging the buy side for data. Post-trade will be an issue because there are so many APAs with many not talking to one another. One hopes that there will be a race to drive down cost as we saw in research.”

The largest firms have already demonstrated the capacity to develop in-house tools to make use of their own data and even built their own data stores.

“We stored data for transaction cost analysis and also pre-trade analysis of [which dealers] have been good in specific bonds and sectors, or at certain times,” says Sanders. “We are now doing more work with our quant team on the impact of block trading. So, the different orders in size and what kind of costs we should anticipate for those trades. The data gives us that, to a degree.”

One debate will be whether or not the public data can provide a similar advantage, via the tools such as Algomi’s Alfa, B2Scan and the Neptune messaging protocol.

“We seem to have come full circle, Alfa was on the market and now Neptune is charging the buy-side, so the industry was provided with more data but then had it taken away again,” notes Poole. “Of course those data and service providers need to make a return and keep the lights on, so it is tricky.”

Measure of the market

Technology will also impact the way that traders engage with the market, whether through automation of the trading desk via artificial intelligence or the use of distributed ledgers to support the issuance and settlement of securities.

“I would like to have some streams about artificial intelligence and Blockchain,” says Saab.

Mapping and understanding a universe of 70,000 instruments is something that an AI or machine learning system could achieve, and support automation of the trading process.

One senior trader observes, “If a system can learn how to get exposure to certain cash flows, you can put in a request to look for exposure with given risk parameters, and it can match that request up to the liquidity that is out there.”

Heads of trading expect to see their own activities and performance become increasingly quantified and measured, which will require a more scientific approach to trading and the management of trading.

Poole says, “Clients are asking about the explicit costs of trading and so there will be a greater focus on best execution analysis (BXA) because TCA for the moment is not working and it is one of the biggest frustrations out there.”

Platforms will be launching in the credit and rates spaces over the next year and the FILS event will be a point at which traders can reflect upon the advantages they offer.

“If we use a platform it is because it offers the best price and/or responded fastest,” says the head of desk at a major asset manager. “Where platforms struggle is finding a way to do that systematically. The hit ratios are much lower on platforms for fixed income than for equities, so if engagement is not systematically automated, the trader faces a lot of work to engage, for low returns.”

The shift away from a qualitative approach will assist in understanding the value these new markets provide.

Carl James, global head of fixed income trading at Pictet Asset Management, says, “We are moving away from muscle memory – humans repeating actions – and becoming much more led by data, so we might change the execution venue based upon quantitative assessment.”

In addition to technology, this will require heads of desk to assess the types of trader they employ and the skill sets they have. As the business becomes more quantified, traders will need to have the skills to apply that approach to their dealing.

“We want to assess traders’ risk appetite, reaction to stress and assessment of behavioural responses,” says James. “There is quite a change in behaviours expected on the trading desk of the future and we need to appraise for that, not for the way things used to be done.”

However some of the agenda will only be realised through the year, as authorities clarify – or otherwise – the regulatory framework for market participants.

“There will be more of a push to understand what regulators want,” says Poole. “At present whenever they come back to us to clarify a point the goalposts have moved a bit, so it would be positive to have more certainty around what we should be focused on. By November I would expect regulators to have provided a lot of that clarity.”