Separating the trading function from portfolio management is a painful exercise, but the benefits can be felt by the end investor. Dan Barnes reports.

Buy-side firms that have cultivated their fixed income trading desks are finding that the joined up flow of information between the trading desk and the portfolio manager (PM) is improving the investment process. 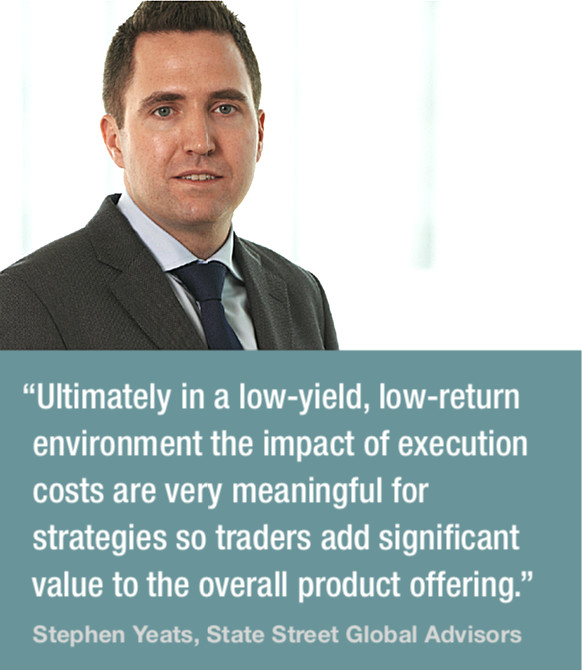 “With the liquidity environment we are in, there is an increasing value in bond traders and having a well-run desk,” says Stephen Yeats, managing director of the fixed income Beta team at State Street Global Advisors. “Ultimately in a low-yield, low-return environment the impact of execution costs are very meaningful for strategies so traders add significant value to the overall product offering.”

Paul Malloy, head of fixed income for Europe at Vanguard, says that by integrating the traders, PMs and credit analysts into the decision-making process, firms get a broader risk picture.

“A very real possibility is that something looking good on paper from a theoretical standpoint actually has challenges with execution that may make it less attractive; wider bid-offer spreads or issues with trading that kind of block in the market in the timeframe you need,” he says. “What actually gets the best end results for the client is bringing the theoretical world and the real world together.”

As this interaction between PMs and traders develops it will lead to more efficient delivery on investment strategies from the trading desk says Stu Taylor, CEO of Algomi, pre-trade market information provider. By accessing non-traditional data such as information on orders that have not been filled, a desk can build up a picture of potential in the market and move beyond price feeds and inventory information, which is relevant to liquid instruments but not the majority of bonds.

“That data misses all the subtleties of the episodic nature of liquidity,” Taylor says. “A dealing desk that can get to grips with this new type of data can help PMs with specific inventory selection and also with the timing of certain trades. For example, a trade may not work now, but by scanning the market a trader can detect an event that makes an idea actionable.”

The role of the bond trader can be transformational if properly supported. Yet its rapid evolution means that many investment managers have not yet realised this potential. One industry estimate puts the number of US investment managers with centralised fixed income dealing desks at around 50%, a figure that rises to 75% in Europe. 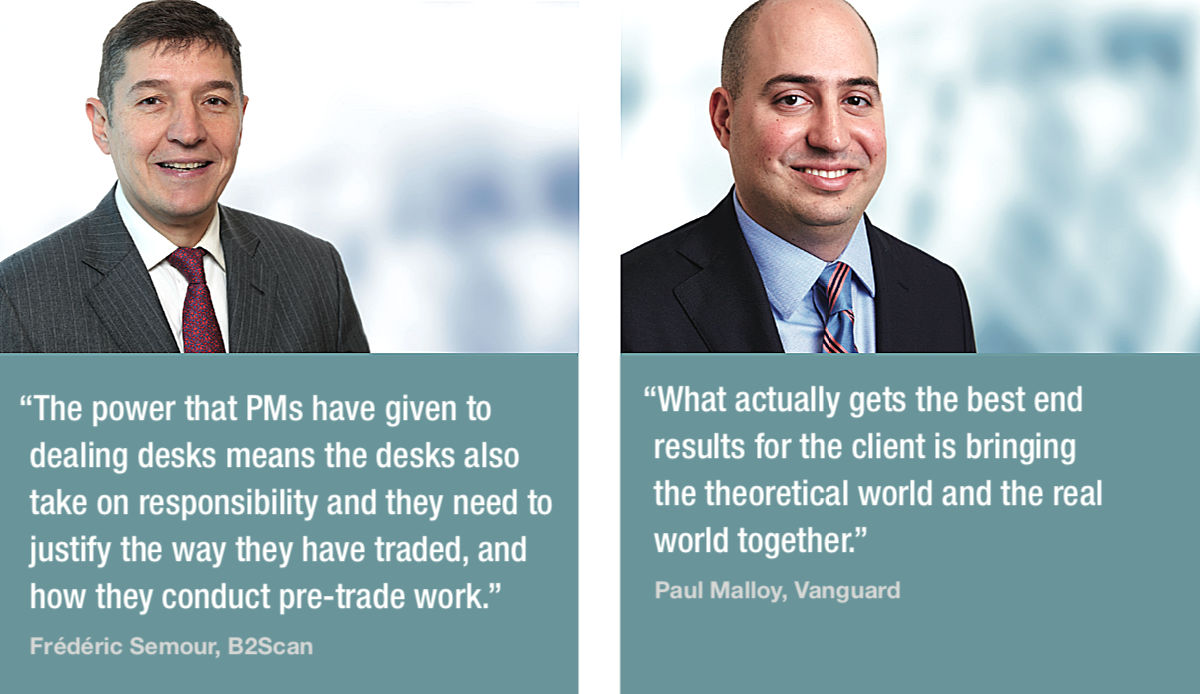 “Regulators are pushing for more segregated trading functions and I think MiFID II will lead to a quickening of the pace to push those responsibilities out,” says James Levy, global head of dealing for HSBC Global Asset Management.

The relatively recent nature of this transformation can be seen in the evolution of BlackRock’s Aladdin platform. Originally it had no order management system (OMS) because the portfolio management process and trading process in fixed income were historically one and the same.

“Our fourth client in around 2002 said, ‘We really need order management capability because we are looking to separate the trading function from the portfolio management function,” says Jody Kochansky, managing director at BlackRock Solutions. “The challenge was, they needed to maintain a lot of the flexibility around security selection.”

Aladdin was subsequently built with an ability to raise an order for a ‘generic’ security that allowed the PM to define the characteristics of a bond they wanted to buy, and allow a trader to have greater autonomy to select the right security, rather than relying on an ISIN (International Securities Identification Number). Orders for generics can be filled with actual securities without the need to amend the original order.

“[The PM] might ask the trader to look for good value in the range of single A, three- to five-year maturity senior debt and within a certain price level, rather than being more deterministic,” says the global head of trading for one of the five largest global asset managers. “Given the way liquidity is going, that is also the way the industry will have to go, because it will become increasingly hard to go to the market with a shopping list of exactly what you want.”

Knowing how far freedom extends is crucial. Malloy, whose firm uses the Aladdin platform, says that a lot of oversight and ingrained risk limits are laid out by the PMs and senior management from the top down before any autonomy is exercised.

“There are guardrails,” he says. “The traders have the ability to operate within those guardrails. So if there are two securities that are really similar and one looks cheaper than the other or more liquid than another, the trader has discretion to make that call. Ultimately they are the experts on that core topic but we make sure that it doesn’t go beyond their realm of expertise.”

The regulatory enforcement of separation between trading and an investment decision also determines where to draw the line. AXA Investment Managers (AXA IM) had historically allowed the traders for one very specific fund to act relatively autonomously in certain circumstances. Its reactivity meant it would get the first call from the market in terms of both opportunity and relevant market information. In that very small universe of instruments its traders knew what fund managers wanted to do.

“If the traders had normal market parameters on the bid and ask and there was an extreme break of that, they would often trade against that movement,” says Paul Squires, global head of trading and securities financing at AXA IM.

Having stopped the practice some time ago, a recent dislocation in that particular market led to enquiries about having that level of autonomy reinstated, however the current need for a clearly delineated process between the fund manager making an investment decision and the trader executing, prevented it.

“There is probably a new dynamic with the concerns that exist around buy- and sell-side inventory imbalance and I can see there is value in exploring ways to mitigate that but we have to always look at any compliance implications,” says Squires.

A new breed of tools are helping buy-side desks to see the market more clearly than ever before, increasing their capacity to act in an informed manner and widening their scope of independent action. In credit, the pulling back of sell-side risk trading has made pre-trade information about liquidity more necessary than ever. Tools that offer quantitative analysis allows the desk and the PM to act with greater certainty.

“The power that PMs have given to dealing desks means the desks also take on responsibility and they need to justify the way they have traded, and how they conduct pre-trade work,” says Frédéric Semour, CEO of B2Scan, a provider of searchable pre-trade information on bank inventory, runs and axes for the buy side. “Now you have systems such as B2Scan and Algomi looking to help the dealing desk make their decisions.”

This quantification is transforming the level of trust that can be assigned to a decision, by reducing the reliance of a trading desk on gut feel and general awareness of which dealers’ desks are good.

Taylor says, “Now there is the capacity to get a much better, more accurate assessment of the banks’ capacity. We have seen this in the e-trading space, where the information is clearly available for the 2-3% of securities that are liquid enough. The question is what do we do about the other 97%? We see this as an opportunity.”

Traders are now better equipped and more capable than ever at evaluating the market, capturing quantitative information and passing that back into the organisation than ever before. With the tools for capturing and analysing data becoming increasingly sophisticated, Yeats sees the potential for more independent trading if tools continue to evolve.

“Right now the PM works very closely with the traders and the end result is better execution and that liquidity information, that colour, can feed into the investment decision,” he says. “To get to a more delegated execution you need the transaction cost analysis piece; that is moving on but less advanced than in other asset classes like equities.”

The potential for buy-side firms to become price makers as an alternative source of liquidity to the sell-side has been discussed in industry circles and if it were to happen, considerable work would need to occur between a portfolio manager, risk manager and trading desk to enable an operation.

“We think a handful of buy-side firms might be capable of market-making,” says Taylor. “A few firms that stood out before the crisis that have very advanced trading operations could become market makers in an all-to-all market. But the number that could do it has not increased.”

Yeats notes that investment firms do not have the capacity to make prices in the same manner as a proprietary trading firm, however sell-side firms could facilitate a less direct liquidity provision should they advertise themselves to trading desks in the right way.

“If there are axes in the market that dealers are more willing to collapse or fill, then that feeds into investment decision making, because that feeds into the price of the asset that you are paying for and ultimately the risk,” he says. “So I don’t see the proprietary side of market making on the radar of buy-side firms, but to the extent that dealers are pricing their requirement for liquidity into the axes they are offering, that is something that asset managers will be looking at.”