Lynn Strongin Dodds looks at the impact of liquidity and settlement reforms.

Regulatory reform, which has been a very long time coming in the US$4.46 trillion global money market has finally dawned, to better support market liquidity and transparency. At the same time new technological innovation, which has been slower to emerge than in other areas of financial services, is starting to become a larger part of the cash management landscape.

On the heels of US regulation in 2016, the European Money Market Fund Reform (EMMFR) – implemented by new funds in July 2018 – is focusing fund managers’ minds. The aim is to strengthen investor protection and restore the industry’s reputation which took a hit during the financial crisis when it became clear that, unbeknown to their investors, many of the so-called ‘enhanced’ European money market funds as well as US triple A-rated funds had gone farther down the credit curve than expected. Investments were not of the high-quality variety but less liquid, riskier assets such as structured products and asset-backed securities.

One of the most infamous cases was the US-based Reserve Primary fund, which had been a money market mutual fund, and saw its net worth slide to about $23 billion from around $65 billion in the summer of 2008 due to its holdings in Lehman bonds. This caused its net assets to drop to 97 cents a share from the benchmark $1 thereby “breaking the buck.” Although there was an immediate call for change, it took several years in both regions to move the blueprints through their respective regulatory mills.

New rules, same game
Under US reforms, enacted in November 2016, prime and the smaller universe of tax-exempt funds, were required to publish net asset values based on the current value of the assets they hold. That was a significant change for an industry that historically boasted about its ability to preserve the value of its investments at $1 a share, and means that now a fund’s price will fluctuate along with market conditions.

In addition, if the fund’s assets that can be liquidated within one week fall below 30% the fund can decide to impose a fee of up to 2% on redemptions. It is 1% if the figure is 10%. The fund can also prevent redemptions completely for up to 10 days if the 30% is breached.

Over the past 12 months though, US prime funds have staged a comeback. Figures from SSGA show that US dollar AUM have steadily climbed from $372bn in November 2016 to $536bn in the fourth quarter of 2018. This is still a far cry from their halcyon days of $1.4tn in 2015, but yield differentials are making investors think twice as over time, they are being compensated for net asset value fluctuations.

In Europe, the new rules introduce stress testing and liquidity requirements as well as additional fees or a gate on temporary withdrawals if weekly liquidity drops below 30% and over 10% of assets in a fund are redeemed by investors. If liquidity slips under 10%, then these measures would be mandatory. A new category for funds has been created – the low volatility net asset value (LVNAV) – while the existing prime constant net asset value (CNAV) funds will be phased out. A report by Moody’s expects that the lion’s share of the CNAV assets will flow into the new LVNAV funds. Prime CNAV MMFs currently manage about €625bn, nearly half of the European MMF industry’s total assets of €1.3tn.

It said, “We foresee little change in the total volume of assets managed by European MMFs. We estimate that between 70% and 80% of the assets currently held in prime CNAV MMFs could transition to LVNAV funds”.

Existing MMFs were supposed to have complied by 21st January 2019, while new funds will be subject to the regulation from 21st July 2019. However, heavyweight managers such as Morgan Stanley Investment Management, State Street Global Advisers and BlackRock have delayed the transition due to the wrangling over the share cancellation mechanism (SCM) which has caused the deadline to be pushed forward to March.

The SCM enables funds to retain the same value per share even if the value of its assets slip. It has been seen as an important tool because it helps managers deal with negative interest rates – a seemingly permanent feature in the EU since 2008. This is unlikely to change in the near future. The European Central Bank may have signalled the end of its asset buying programme but rate hikes may not occur until next year or beyond.

The tussle over the SCM’s future was between national regulators with Luxembourg’s Commission de Surveillance du Secteur Financier (CSSF) and the Central Bank of Ireland in favour, while others such as France’s Autorité des Marchés Financiers (AMF) were opposed – aligned with the European Commission’s position. The European Securities and Markets Authority (ESMA) finally sided with the Commission but waited until Christmas Eve to announce that SCMs would not be allowed.

Tight timeframe
Having expected a moratorium, fund managers are now having to scramble to get their respective houses in order by March and find a solution to mitigate the negative yield problem. Although many predict there will be a move to accumulative structures, where share prices fluctuate along with the yield, there is also a concern over withdrawals.

“Year-end is not the best time to implement a technological change,” says Jonathan Spirgel, global head of liquidity & segregation services for BNY Mellon Markets. “Also, some market participants had expressed hopes that there would have been a six to nine month moratorium, but instead the postponement was ultimately two months. I think one result of this is that we could see people moving money out of their euro-denominated funds into other liquidity options.”

William Goldthwait, portfolio strategist, global cash and fixed income investment management team at State Street Global Advisers (SSGA) adds, “People thought there was going to be a smooth transition in January to LVNAV funds and then everyone had to recalibrate due to SCM being deemed ineligible for euro funds. This reopened the debate and forced delay of reform implementation.”

He says, “Thus far asset flows have been muted which is dissimilar to the US where over one trillion dollars switched out of prime strategies [which mainly invest in corporate debt securities] and into sovereign strategies. One reason for the lack of movement in Europe is the fundamental structure of the low volatility net asset value has not changed and the prime strategies continue to seek to maintain a constant 1.00 NAV. The second reason is liquidity gates and fees are applicable to both prime and sovereign funds.” 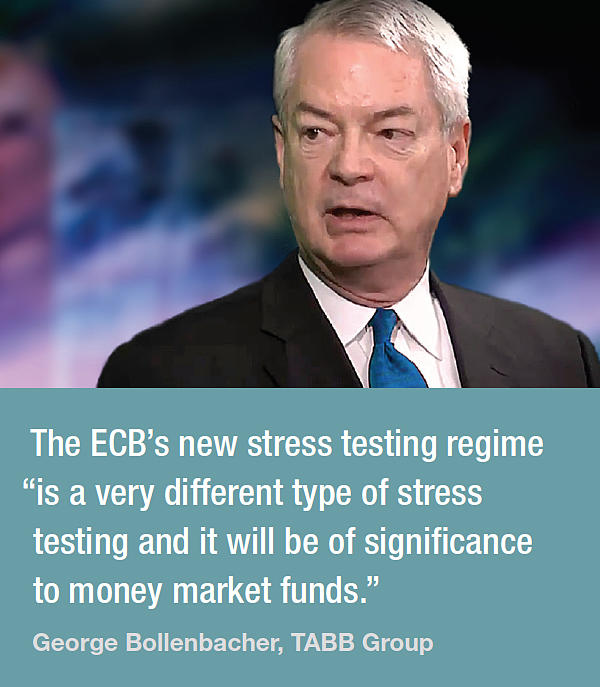 The stability and liquidity of money market funds could be impacted by the new stress testing regime being touted by the European Central Bank, according to George Bollenbacher, head of fixed income research at TABB Group. The exercise will focus on a bank’s expected short-term cash flows in order to calculate a ‘survival period’, which is the number of days that a bank can continue to operate using available cash and collateral with no access to funding markets. The ECB said it will put around 100 banks through their paces. They will have to undergo a battery of “adverse and extreme hypothetical shocks” at different levels of intensity, causing “increasing liquidity (cash) outflows” This is in contrast to past rounds which were based on broad simulated scenarios like a global economic or political crisis.

“This is a very different type of stress testing and it will be of significance to money market funds,” says Bollenbacher. “For example, the constant net asset value (CNAV) funds invest almost entirely in public debt and they will be affected because of the quality of the issuers. If you go around Europe, you will find hundreds of corporate borrowers who are higher quality than countries such as Italy, Portugal and Greece.”

Although the industry has witnessed a great deal of change over the past two years, technological innovation has been slow. In fact, trading is still mainly conducted the old-fashioned way – by voice.

“In the fixed income business, we now do 90% of our trades electronically via one of the platforms,” says Goldthwait. “Even if we do negotiate on the phone, we will trade it electronically. However, cash is the opposite and 90% of trades are done on the phone. One reason is that 90% or 100% of the cash business is primary which is not the case in fixed income which for the most part is secondary trading or putting on positions.” 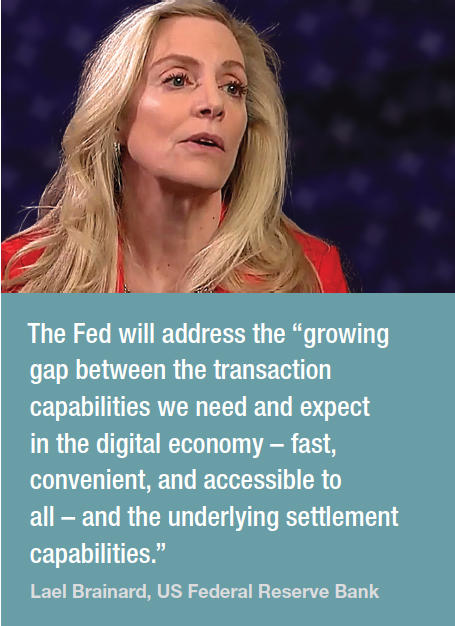 Goldthwait does not foresee this changing in the near future but he does believe the settlement and workflow processes will be modernised over time. He points to the initiative discussed in a speech given by Fed Governor Lael Brainard last October that would address the “growing gap between the transaction capabilities we need and expect in the digital economy – fast, convenient, and accessible to all – and the underlying settlement capabilities.” The new system would introduce “real-time gross settlement,” which promises to operate 24/7 and settle each payment as soon as it is sent.

Potential for greater efficiency
At the moment, the current systems that transfer funds between banks are not set up to work in a 24/7, real-time world. Instead, most faster payments settle funds between banks on a deferred basis. Deferred settlement entails a build-up of obligations – like IOUs between banks – that could present real risks to the financial system in times of stress, according to Brainard.

Individual banks have and are also tackling infrastructure problems. Twenty years ago, BNY Mellon launched its Liquidity Direct portal through which clients such as treasurers and asset managers can buy and redeem a wide array of highly-rated money market mutual funds in different currencies. In the wake of the US reforms, BNY Mellon has introduced straight-through workflow tools, enhanced reporting and analytics, according to Spirgel. This ranges from being able to schedule reports in multiple formats with yields, returns and credit ratings, to viewing the underlying securities of your overall holdings by country, issuer, maturity and security type.

In the much smaller $134bn daily unsecured space, Instimatch Global is hoping to make its mark with its digital network platform for institutional treasurers. The sector is also heavily voice-brokered and dependent on bilateral relationships, but Daniel Sandmeier, chief executive of the firm believes a centralised marketplace will not only add more colour to the trading process but also provides better liquidity, diversification of counterparties and pricing across borders, not just within them. “Just as people look at Instagram and Facebook to get information, they can look at Instimatch to see the drivers that are moving positions at the short end. We think there are opportunities because we are offering them an alternative of a magnitude that has not existed before.”