The International Capital Markets Association has found 44% of buy-side trading desks have increased their use of rules-based, fully automated electronic execution compared with three years ago, while 56% are still automating the same amount. 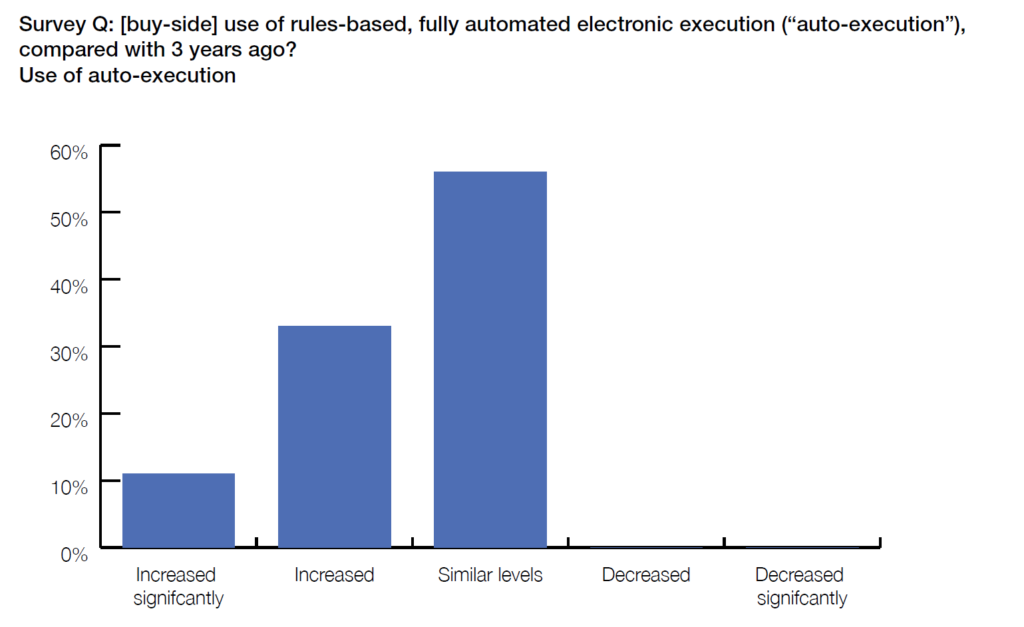 In its report ‘Time to act’, ICMA’s third study into the state and evolution of the European investment grade, corporate bond secondary market, the industry body found significant advances in the use of technology across the buy and sell side since its last report in 2017. Having run prior to the revised Markets in Financial Instruments Directive (MiFID II) coming into effect in January 2018, market structure, reporting requirements and data availability have changed considerably in the intervening period.

The report notes that sell-side firms also report a continuing trend toward more automation in the investment grade credit market, and the increasing use of algorithms to quote prices, “either in response to client request for quotes (RFQs), or on a streaming basis (continually updating two-way quotes, usually in response to a ‘request for stream’, or RFS); whether through a trading venue or directly to a client via direct access trading (DAT) functionality.”

The report author, Andy Hill, wrote that buy-side interviewees suggested that this is a welcome development, “providing actionable pre-trade transparency, and while sizes may be small, overlaying quotes from multiple dealers at least helps to build a picture of market depth and liquidity (constructing so called ‘liquidity trees’).”

However, differences between a dealer’s auto-quoted price and the one provided when clients call or message them, typically showed the algorithmically-generated price to be worse.

Buy-side traders have increased their use of order-staging technology to post trades into the market, with 89% of firms using an order management system to post >75% of their orders into the market, and 40% of firms trading more than 75% of their orders electronically. That also represented an increase in electronic trading by 50% of buy-side firms and a significant increase by 20% of them.