Traders at buy-side firms are looking for help in the management of bond issuance. Today the process of managing information about new issues from multiple banks, each providing different amounts of data in non-standard formats, creates an administrative headache. However, they do not want too many new solutions, potentially creating more fragmentation.

“It is essential that something emerges to change the status quo, the current status is inconsistent with the rapidly increasing automation of the market,” says James Wallin, senior vice president at AllianceBernstein, which has US$585 billion in assets under management (AUM).

Michael O’Brien, global head of trading at Eaton Vance, which has $497 billion AUM, says, “There is demand for a product that could save the process of calling multiple syndicate desks to get information and talk about the buy-side’s level of interest; the bulk of the time spent on new issues is on the valuation side, as opposed to the processing side, but still there are significant time savings to be had by using more efficient platforms.”

In 2018 the level of corporate debt in the US had risen to US$9.2 billion outstanding, up from US$5.5 billion ten years before (see Fig 1), according to the Securities Industry and Financial Markets Association (SIFMA). 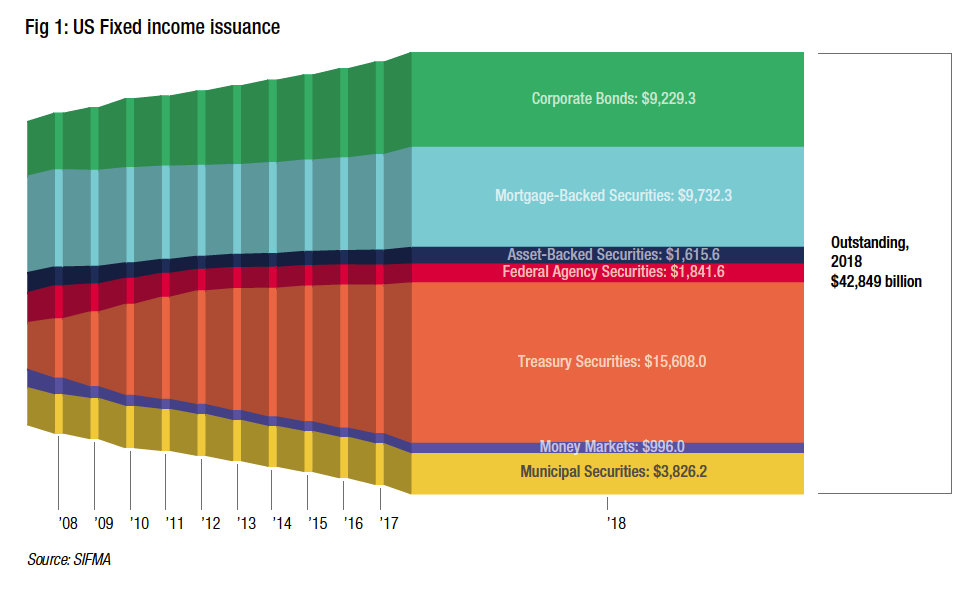 In a low yield environment, the expanded supply of credit instruments offering small returns reduces liquidity of existing bond portfolios in the secondary market, by increasing the investible universe, and lets issuers push for less attractive conditions on the bonds they are offering, such as Restaurant Brands’ 8.5 year junk-rated bond in September 2019, which was offered below the 4% yield floor record for US high yield bonds.

When the debt capital markets (DCM) and legal teams at the banks, who are managing the issuance, have outlined the terms of the deal, potential investors need to gather that information and then – if it looks good – enter into the negotiation process to get an allocation as the sell-side builds a book of interest.

This involves a stream of information being relayed via the buy-side trading desk to the relevant PMs and back; it is not ‘trading’ because there is no liquidity or price discovery, and no timing around engagement. The more time it takes, the less time traders have to handle more important processes.

The launch of at least two new systems in 2020 potentially creates new solutions to this problem, but with multiple new places to go, the market may take longer to find a common, standardised solution.

“In an ideal world there would just be one system, but I think it would be hard to get there; we see fragmentation here just as we see it in all other markets,” says O’Brien.

In 2020 the existing systems typically used for handling new bond issues – Bloomberg and IHS Markit’s Ipreo – will be joined by Directbooks, led by a bank consortium, and a new offering from Liquidnet. The battle to reduce trader fatigue in processing new issues will intensify.

“I don’t know if it would be better served by an industry utility or by competing platforms; however whoever gets it right will essentially be doing the same thing as the others, there should be no qualitative difference between competing platforms since the deliverable is well defined,” says Wallin.

IHS Markit’s Ipreo suite of systems were originally developed with the sell side to provide book-building technology to help syndicate banks increase the efficiency of the process.

“Those are widely adopted technologies, they are used globally today,” says Herb Werth, managing director for Global Markets at IHS Markit. “More recently, we have been focused on extending that to the buy side with our Investor Access initiative which we launched a couple of years ago, and now we have over 400 investors on the platform and just over 50 banks publishing deals.  We have done close to 2,000 deals on the platform year to date, and so Investor Access has essentially become a regular primary workflow for investors in the markets in which we operate.”

Buy-side traders report the most ubiquitous platform in the US to date is Bloomberg, which is used for transmitting deal information using the Bloomberg messaging tools, and dedicated services like the New Issue Monitor (NIM).

“For working the US side, Bloomberg is entrenched, its NIM is used by all of the banks involved in Directbooks except for JP Morgan,” notes one US-based buy-side trader.

Mark Betteridge, global head of Fixed Income and Currency Analytics at Bloomberg says, “In addition to the deal information that gets communicated across Bloomberg Messenger or Bloomberg IB or Ipreo today, there is also the information that investors are not sent. That is where Bloomberg’s New Issue Monitor and Bloomberg’s ‘First Word’ news coverage of the markets seeks to fulfil the broad role of everything you need to know in the market as a whole. There is more than just the deal information.”

The launch of a new platform – Directbooks – in 2020, promises to compete directly with IHS Markit. Richard Kerschner, CEO of Directbooks declined a request for an interview. Directbooks said in its inaugural press release that it aims to increase the efficiency and accuracy of deal workflow information, using a communication platform that integrates into both the underwriter and investor systems, launching first in the US credit market. Perhaps more importantly, it is backed by the major US sell-side firms and several European banks; Bank of America, Barclays, BNP Paribas, Citi, Deutsche Bank, Goldman Sachs, JP Morgan, Morgan Stanley, and Wells Fargo. 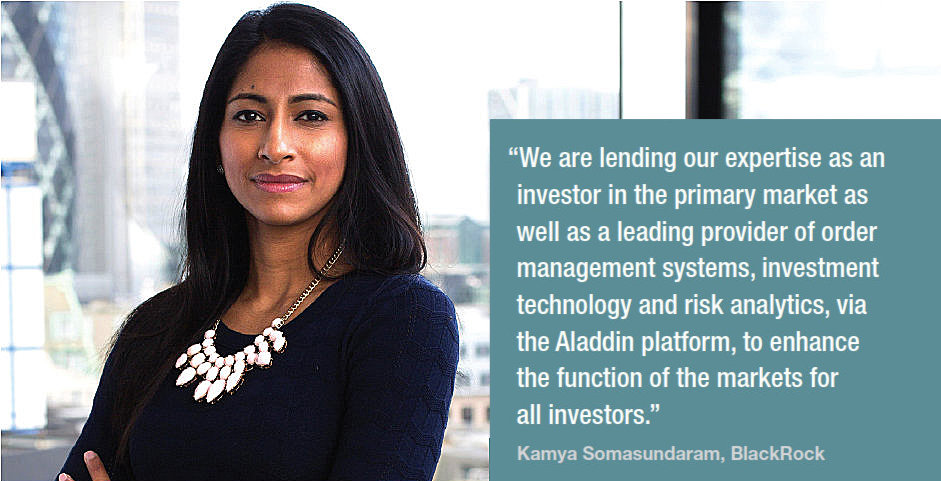 Kamya Somasundaram, head of Americas Credit Capital Markets at BlackRock, said in the launch statement in October 2019, “We are lending our expertise as an investor in the primary market as well as a leading provider of order management systems, investment technology and risk analytics, via the Aladdin platform, to enhance the function of the markets for all investors.”

This has created a dichotomy for investment firms. Wait for the bank consortium to launch Directbooks or connect with an existing platform in the shape of IHS Markit, which US dealers have reportedly boycotted.

“From Asia’s perspective, half the banks are on one platform and the other on the alternate which would effectively double our work,” says one head of fixed income trading at a major buy-side firm. “[Ipreo] works in the European instance because most deals are originated from European entities. As effectively half the counterparties we use are not on Ipreo – because they aligned themselves with the other entity – there will be no reason for us to pursue anything [more] with Ipreo, so our manual new issue process will, unfortunately, remain the same.”

Not a two-horse race

Liquidnet is reportedly launching a new system that will support the transfer of information between banks and buy-side firms, potentially plugging into workflow solutions like the Ipreo suite and Directbooks. Liquidnet declined to be interviewed for the article.

Asset managers will need to consider the cost and value associated with each offering. In the secondary markets, the launch of multiple new platforms in credit has not led to widespread adoption, and largely the incumbent platforms have proven more successful.

“We don’t see Bloomberg as a rival to these new offerings, we support a broader space,” says Betteridge. “A lot of new issue information goes across Bloomberg, but there are three parts to the primary issue workflow: communication of the information, analysis of the deal and bookbuilding. While we provide community and communications as well as security, issuer and market analysis, we do not offer a bookbuilding product today.”

Standardising the process will bring considerable benefits in reducing errors and processing work; that can be potentially assisted by standardisation of the information even without a new technology being implemented.

“The deal terms are often communicated via Bloomberg messages, out to prospective investors,” notes Betteridge. “There is work ongoing from groups like ICMA, to create standards around information and we think that is key. We have been working with ICMA committee members and we are about to release a new template for the European market which mirrors exactly what ICMA members have asked for.”

Werth says, “As solution providers and market participants, we should be careful that by introducing new technologies and innovations that they aren’t inadvertently creating new barriers to entry for market participants that maybe weren’t there before. So, I think that needs a combination of single point of access and simplification, but also making sure that the level of access that they have today is maintained or improved.” 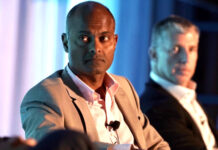