The economic effect of the Russian invasion of Ukraine needs to be put in context next to the human tragedy, but data is showing us the effect on the flow of capital; it is massive and not confined to those two countries.

Firstly, we look at the pricing of bonds from both Ukraine and Russia, in data supplied by CreditSights. Talking Ukraine first, CreditSights notes that the market is pricing in the likelihood of a default, although the country’s Debt Management Office had reiterated that it will continue to services its debt, and Ukraine was able to raise several hundred million dollars of investments through a one-year bond issued earlier this week which was designed to support the war effort. 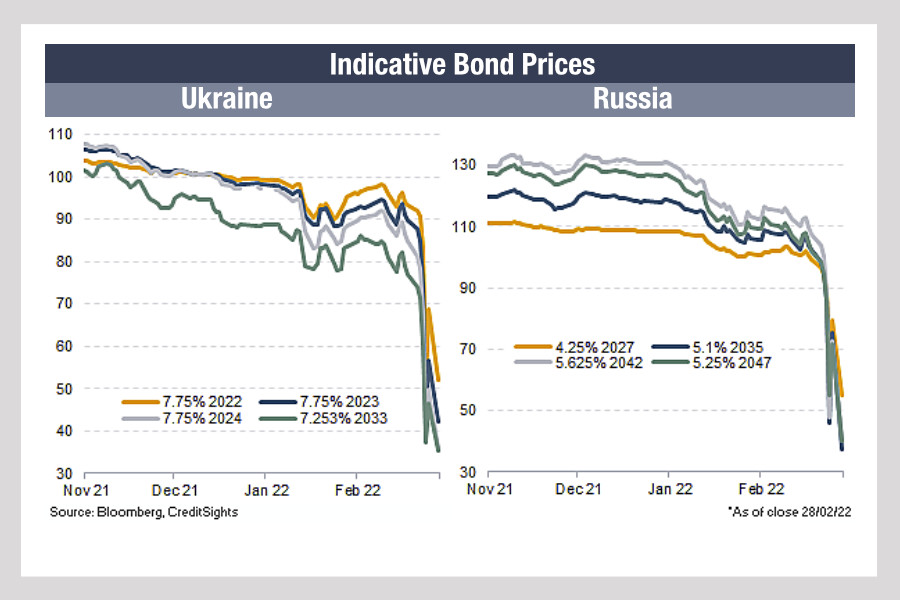 The outlook for Russia, by contrast is agreed by many analysts to be very uncertain going forward as liquidity supplied by markets is likely to be badly impacted by the sanctions levelled at individuals, corporations, state departments and the central bank. With even commodity and energy traders privately shunning trade with Russia in areas that fall outside of sanctions, concerns are high that even a cessation of violence would not be lead to a recovery in a timely fashion.

Yet we also see the impact of the disruption created by the war impacting the cost of liquidity elsewhere. MarketAxess data shows us the bid/ask spreads in European bonds are increasing in direct correlation with the ongoing conflict.

This is most notable in high yield bonds, where the recent uptick in spreads is quite pronounced, with typical spreads rising from €0.22 in the week of January 23 to €0.35 this week.

In European investment grade (IG), we see an increase in spreads in recent weeks as well, with a current median spread of €0.13 vs €0.10 in the first week of January while it is less pronounced in UK investment grade debt.
Emerging market European debt has seen very significant widening of spreads in the last two weeks, and MarketAxess data shows this week’s median spread at almost €0.33 against €0.25 in the first week of January.

Even in the US spreads are widening, and with debate around imports of Russian oil and gas ongoing at the time of going to press, it is clear the American economy will be directly affected by the situation.

However, while US IG and HY spreads have widened somewhat over the past few weeks, they are still relatively stable, with USD IG and USD HY spreads around 2.94 bps and $0.28 this week, respectively.